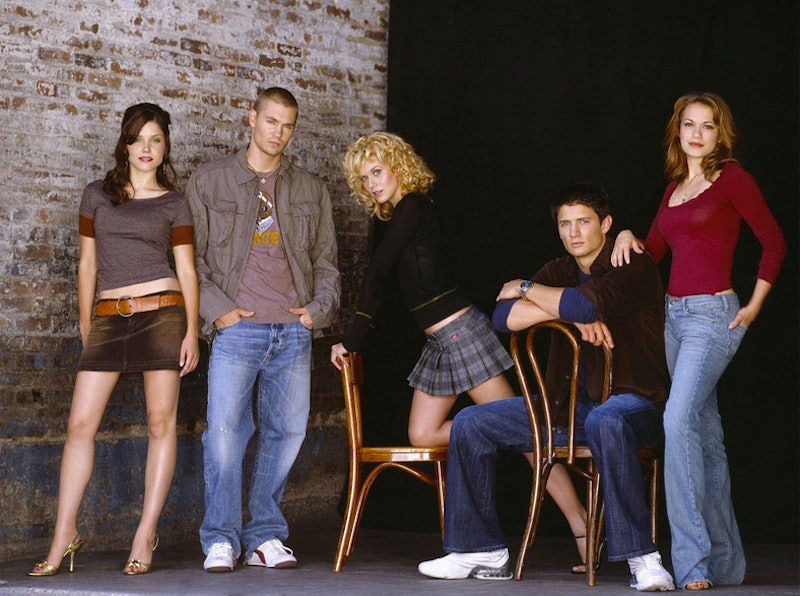 It's never too early to start planning your Halloween costume, right? And, conveniently, it's never too late to celebrate the 11th anniversary of One Tree Hill by dressing like Brooke Davis, who's easily the best character of all time, for said Halloween costume (I've done it and it was totally awesome). Luckily for you, diehard OTH fan, it's actually really easy to achieve the perfect Tree Hill High-approved costume for any of the series' main characters. I'm talking two-items easy. So crank up the Gavin DeGraw and and start dreaming of the River Court because here's everything you need to be Nathan, Lucas, Haley, Peyton, or Brooke this year.

The great things about choosing pop culture high schoolers as your Halloween inspiration are 1) that you probably own most of what you need except for the major statement pieces and 2) you'll totally wear this stuff again and again and again. Except for maybe Haley's "ugly ass poncho," unless ponchos are your thing, of course. And if you've been putting off showing your love for your favorite Scott boy all of this time, now you've got the perfect excuse to buy a "23" or "3" jersey to wear at the gym and/or during your OTH marathons at home. An OTH costume is actually a gift that keeps on giving and you'll totally be the hit of any Halloween party you were it to — because, nostalgia. Got it?

So, here are two key pieces you need to pull off an OTH costume for your favorite character:

Peyton's style matured throughout the years, but she never got rid of her band tees and her Chuck Taylors. Because, well, those two items are the essence of Peyton Sawyer and if you pair them with a pair of bootcut jeans and a leather jacket, you're good to go.

You can buy Peyton's Ramones t shirt from the first time she met Lucas on Amazon for $18.

Another easy look. The most iconic piece of clothing from OTH — aside from the Scott brothers' Ravens jerseys — is Lucas' Keith Scott Body Shop hoodie that appeared in every opening credit sequence of the entire series. This sweatshirt IS OTH, thus the most important part of your Lucas costume when paired with any pair of sweats and sneakers.

You can buy a replica of Lucas' hoodie on Amazon for $29.

And no Lucas Scott costume would be complete without a puka shell necklace because he was so into those things. You can get one on Amazon for an extremely reasonable $17.

Nathan's costume might be the easiest to pull off — all you really need is a "23" Ravens jersey and a pair of athletic shorts or sweatpants and you're ready to kick some ass on the basketball court.

You can get a replica of Nathan's jersey on Amazon for $35 in either the white and blue or black and blue version.

And, of course, a pair of basketball shoes, like this pair of Nike Hyperdunk Basketball Shoes for $128 on Amazon.

Compared to Brooke and Peyton, Haley's style in the earlier seasons of OTH was characteristically plain save for this poncho. The one time Haley wore this crochet flower poncho Lucas made fun of it and years later Nathan brought it up as he remembered their first date.

You can get a similar poncho on TheRealReal for $75. A little pricy for Halloween, but you could totally rock this one at an outdoor summer concert.

The second most important item for your Haley James Scott costume — her cracker jack bracelet. You can buy a replica for $28 on Etsy, but you could also head to the closest craft store and pick up some beads and elastic and craft one on your own.

Brooke had a pretty amazing designer-filled wardrobe but if you want to go full-on Brooke Davis, you're going to have to be cheerleader Brooke. While a full replica of the Tree Hill Ravens cheerleading uniform is available at Cheerleading.com, it'll run you between $145 and $155. But you could do off-duty cheerleader Brooke like in the above photo for a pretty reasonable price — just add sneakers and a headband and you're ready for practice.

First, the Ravens cheerleader top — you can get a t-shirt option from RedBubble for $30.

And for the bottoms? Obviously Brooke Davis wore Juicy Couture velour sweats and you can too. Kohls has relaunched the classic Juicy sweatsuit and you can score a pair for $36 online.

Or you could just make your own Ravens cheerleader costume

Which is really a lot harder than it looks. Trust me.