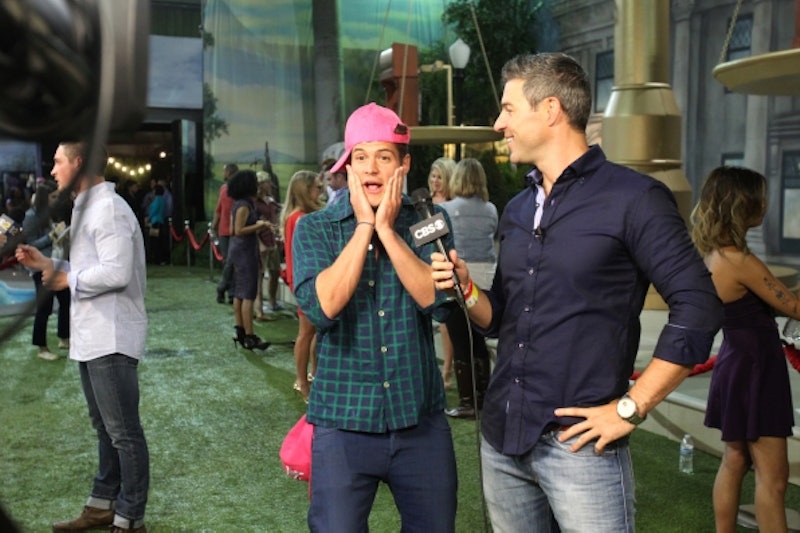 It felt like everything fell into place on Big Brother 's finale when Donny won America's Favorite Houseguest and Derrick won the first place prize. But even I was shocked that Donny beat Zach for America's Favorite by 5 million votes. That's a huge difference. Donny was the underdog this season. It often felt like he was ganged up on for being genuine, which is why America loved him. Zach, on the other hand, wasn't the greatest player, but he was definitely fun to watch. "I thought it was Zach... Frankly, Zach was a huge entertainment factor in that game... I think he made a lot of the show," Derrick tells me when I ask who he thought would win the title.

Derrick — being a huge fan of the show — knows that Donny's "sob story" was going to help him win, but for him, he really loved that Zach kept the audience involved, and often made something out of nothing. "For me, that was exciting to watch," Derrick says. He wasn't the only one who thought Zach had the America's Favorite title locked.

"I thought Zach was going to win that," Victoria explains during our interview. "He was very entertaining... I really thought he had it in the bag," she says. Cody, this season's runner-up, thought the same thing. "I really wanted Zach to pull it out," he tells me. But don't worry, Cody gets why Donny won. "You couldn't not be a fan of Donny. If you weren't a fan of Donny, I don't know what you were watching."

But what about Frankie and his huge social media following? When I asked if Derrick was surprised Frankie wasn't even in top three he says, "not really." But why? "There's a couple reasons. One, after we lost that broadway mission for Team America, I realized he didn't have as many people watching the show as he thought." Another reason though? "Big Brother fans, are real Big Brother fans. We want the best players to win. Real true diehard fans don't care what you do outside this game," Derrick says.

Cody believed the same thing, noting that Ariana Grande fans weren't going to be the fans to vote 20 times a day. "Big Brother fans are the fans that vote nonstop. Ariana Grande's fans, the people that aren't fans of Big Brother, are going to vote once and be like, 'Oh, I'm done.'"

So while the final three might have wanted Zach to win, at least they weren't dazzled by Frankie's social media fame. And in case you were rooting for Zach over Donny, fear not, because Zach isn't leaving empty handed. After the finale, Zach revealed that he would also be guest starring on Bold and the Beautiful, just like Donny. They may not have won the show's biggest prize, but Donny and Zach certainly left a big impression on viewers and their fellow houseguests alike.