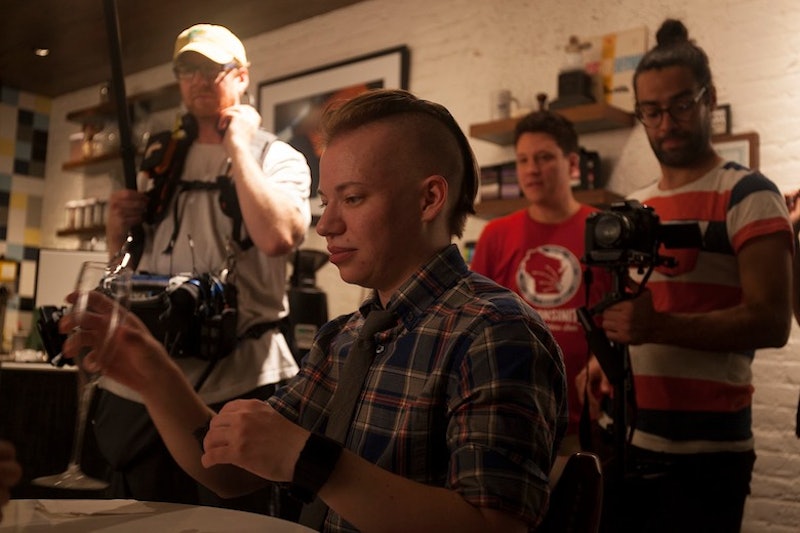 Amazon's buzzed-about new dramedy about a trans woman, Transparent , may be enjoying a surge of media attention this week, but there's another trans-focused web series you should also know about. BROTHERS , directed by Brooklyn filmmaker Emmett Lundberg, follows four millennial trans men — all played by actual transgender actors, rather than cisgender men — as they navigate life in New York City. The show fills a distinct void: While high-profile TV shows are including more trans women characters (Laverne Cox's Sophia Burset in Orange Is the New Black and Jeffrey Tambor's Maura Pfefferman in Transparent are two noteworthy examples), the presence of trans-masculine characters is decidedly lacking. Lundberg hopes to change that.

“There have been documentaries [about trans men], but it has yet to move into the narrative world,” Lundberg tells Bustle. “If we can turn our stories into narratives, they become more visible. And trans men’s stories need to be seen.”

Lundberg's series, which found its backing on the crowd-funding website IndieGoGo, revolves around Jack (played by Lundberg), who has recently started sleeping with cisgendered men after a lifetime of only sleeping with women; Max, who has been on hormones the longest, but still can’t afford the top surgery he yearns for; Aiden, the youngest, who has recently booked his own surgery; and Davyn, who is preparing to propose to his longtime girlfriend.

Perhaps the most revolutionary aspect of the new series emerges from Lundberg's portrayal of the day-to-day minutiae of the reality of living as a young transgender man. Exhibit A: Midway through the pilot, Jack is asked to show his driver’s license to an innocuously forthright receptionist.

“Can you believe that? I’ve got to get that fixed.”

Moments later, he's crouched in a bathroom stall, anxious for the public restroom to empty out so that he can feel comfortable using it. Both scenes, Lundberg says, are “very telling” of the trans experience. Both scenes, he added, touch on privileges cisgendered people (those who identify as the gender they were assigned at birth) don’t think twice about. That, Lundberg says, is precisely the point.

“I would like people to understand what it’s like on a daily basis for this group of trans people,” he says.

And as Lundberg knows better than anyone, the process of transitioning is anything but easy. Speaking about his own experience, he says there was “some terror” in knowing that many of his relationships ― family, friendships, and otherwise ― might not survive the many changes he was going through.

Still, transitioning can also be joyful, and Lundberg wanted to depict that as well. Unlike most pop culture representations of trans characters ― think The L Word and Degrassi, two highly popular shows that offered tragic portrayals of trans men ― BROTHERS seeks to celebrate the trans experience.

“I hate the way trans people are portrayed in most shows, they make being transgender seem terrifying," Jamie Casbon, who plays Davyn, says. “[My transition] was the best thing I’ve ever done for myself. We need to put some hope out there for trans people.”

“Everyone is going to be able to identify,” he says. “[BROTHERS] portrays trans people as people, and I really like that. Day to day, I don’t really think about being trans. I’m just a person.”

Indeed, Lundberg says that giving all types of people the opportunity to relate to trans characters is exactly what he had in mind when he penned the script.

“My ultimate goal would be for people to forget they’re watching a show with trans characters,” he said. “Almost every human knows what it’s like to start falling for someone new, to fight with an ex, or to be excited for a big moment in their lives.... I want the show to be this universal thing that everyone can relate to.”