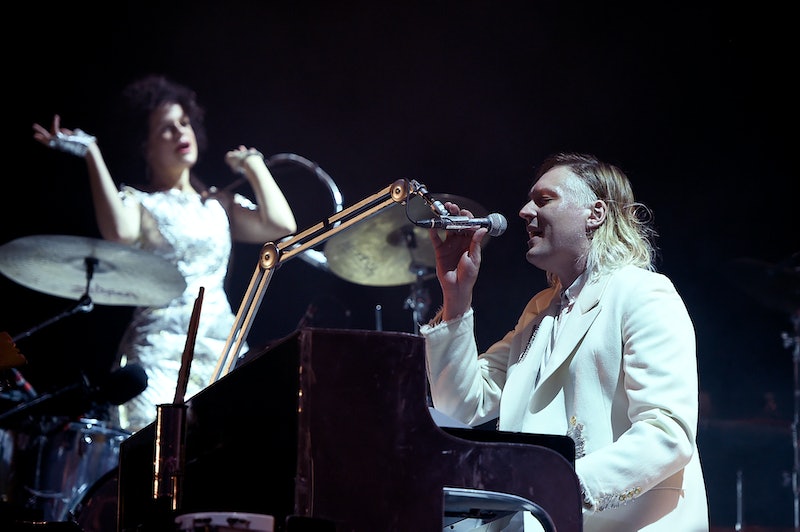 Last week, indie band Arcade Fire released the music video for the song “We Exist.” The video features Spider Man ’s Andrew Garfield as an individual struggling with gender identity. Garfield is shown putting on women’s clothes before heading to a bar where his character is attacked — then quasi-resurrected — following a surreal dance scene in which, admittedly, the actor shines.

When I first saw the video, I had conflicted feelings. I thought that Garfield’s portrayal of a trans woman paralleled some of my own experiences as a trans woman, and I found it relatable, perhaps even uncomfortably so. As his character stood and stared in the mirror, I was transported back to my bedroom when I was 20 years old and struggling with my gender identity. I remembered the same frustrations as I tried to find my way to a reflection that wouldn't make me want to avert my eyes every time I saw a mirror.

there is a prevalent idea that viable transgender actors and actresses simply do not exist. Naturally, this becomes a self-fulfilling prophecy when they never gain exposure, rendered invisible by the lack of acknowledgment on the part of directors. One can see how this is especially problematic in a video for a song entitled “We Exist.” If so, where?

Nevertheless, there were aspects of the video that bothered me, and as I began to see the reactions of other transgender women on Twitter and Facebook, I knew I was not alone.

First, the song itself is not about trans women — it’s about a son telling his father that he is gay. While coming out in this way is as common an experience for trans people as it is for lesbian, gay, bisexual individuals, there is a danger in conflating sexual orientation and gender identity — especially in a video clearly intended to promote tolerance and understanding.

In our society, gender identity and expression are often muddled with sexual orientation. The suggestion that trans people are simply "extra gay" has been used to delegitimize transgender identities by suggesting that transgender people should just be comfortable with being gay, regardless of whether or not they ever self-identified as such.

In my case, I had to come out twice to my parents and friends (first as bisexual, then as transgender), and I don't see the two as necessarily related. For a time, I internalized ideas that transgender women should be attracted solely to men in order to be legitimate, which made me question my identity. But that only underscores why the conflation of gender identity and sexual orientation is so harmful.

As exemplified by the choice of Jared Leto to portray a transgender woman in Dallas Buyers’ Club, there seems to be a prevalent idea in Hollywood that viable transgender actors and actresses simply do not exist. They are rarely acknowledged as possible casting choices, even for transgender characters. It's easy to see how this idea could become a self-fulfilling prophecy: If casting directors don't think there are trans actors capable of playing the role of a trans character, they won't put out calls for said actors, and as a result, trans actors will remain less famous, if not invisible. This becomes particularly problematic when you're casting a video for a song entitled “We Exist.” If so, where?

Even in stories centered on transgender narratives, transgender individuals are often passed over and drowned out by outsider voices incapable of articulating these narratives from the same perspective. The message this sends is that expressing our narratives on our terms is less important than affirming the (usually inaccurate) narratives that non-trans people have created about us. The end result, of course, is that we are never recognized for who we actually are.

As I watched Garfield’s character endure violence at the hands of transphobic individuals only to emerge seemingly reborn before a rapt, cheering audience, I was reminded of the way Jared Leto received accolades and awards for his "courage" embodying a trans woman in his role in Dallas Buyers’ Club. Yet the very real courage transgender people display every day is hardly ever recognized. If we are depicted in pop culture at all, it is often as tragic victims whose entire lives are reduced to an instance of hateful violence. Viewed through that lens, Andrew Garfield's performance can begin to feel a bit exploitative.

For trans people, our life is not a performance. We don’t gain awards or recognition for being ourselves and enduring the struggles we face. And the attention that we get for saying that we exist is usually not positive. I have an entire blog dedicated to hateful things people have said about me for daring to be visible as a transgender advocate. I’m not going to dance that away, or wake up reborn in a world where I’m suddenly accepted by everyone around me. I have to fight every day to better not only my standing, but the standing of my entire community, to those who dehumanize us.

I do think that Andrew Garfield gave a good performance, and I appreciate Arcade Fire’s effort. I think it’s good for allies to acknowledge that trans people exist, and that we are people. But in the end, I can’t shake my discomfort with this video.

It comes off hollow when our narratives are used as bait for awards and recognition, especially when it doesn't translate into more opportunities for transgender actors. It would be nice, for once, if actual transgender people were given a platform to actually say that we exist, on our own terms. It would be wonderful if our experiences were regarded as unique, and not seen as seen as interchangeable with that of cisgender gay men or drag queens. It would be refreshing if there was an acknowledgment that fixing the problems we face is going to take more than pride and proclaiming that we exist.

Because the people who hate us already know that we exist. As it stands, saying so only tends to make us a target. Instead, we need allies and society at large to acknowledge that transphobia exists, and that it kills. We need recognition of the fact that structural intolerance for variance in gender expression very much exists. And we need acknowledgment that sex and gender exist not as rigid binaries, but as spectrums of diversity.

We as trans people have the right not only to exist, but also to thrive and to be recognized as we are. And we deserve to articulate the breadth of our experience with our own voices.