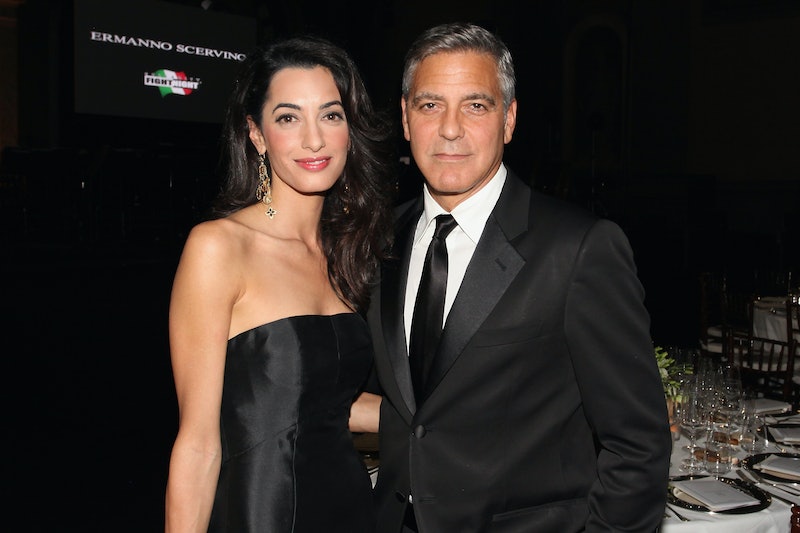 Much to my surprise, it seems that George Clooney and Amal Alamuddin's wedding is actually happening this weekend. It isn't surprising that they're actually getting married, but rather that they seem to be pretty open about the fact the festivities are happening, like, tomorrow. I lived through the Kimye wedding, you guys, that thing was full of secret brunch this and surprise wedding location that. But with Clooney and Alamuddin, they just seem to be carrying on like everything is normal. The pair were seen in Venice (their wedding location which Clooney spoke openly about at an event) on Friday and some of their guests have even been spotted. Very exciting! So who is attending Clooney and Alamuddin's wedding? Every Oscar winner of the past 10 years, I assume?

USA Today reported that Clooney, Alamuddin, and number of their guests were spotted in a caravan of boats heading to Venice's Cipriani Hotel. Did I have you at caravan of boats? I know seeing a picture of this glamorous journey was what suddenly convinced me that I NEED to be at this wedding. (Also, it'll probably have some dank ass food.) Unfortunately, I cannot afford a last minute flight to Venice (the only thing keeping me out of this wedding obviously), so let's take a look at some of the guests who will be attending and some that just really need to make it there.

Damon and his wife, Luciana Barroso, were two of the people spotted in Italy, and there's photo evidence for all your skeptics out there.

Crawford and her husband, Rande Gerber, are going to the 2nd Best Wedding of the Year, which makes sense because apparently the couples are pretty good friends.

Barkin was in Ocean's Thirteen with Clooney... and that's probably not the only reason she was invited.

Hey! It's that guy! (Omg, is that mean?! I loved you in the freakin' massive amount of stuff you've been in!)

Caravan of boats and Krasinski? I want to go to there. And, yes, Emily Blunt is cool too. Whaddup, first assistant to Miranda Priestly!

Steve Lukather is from the band Toto and I assume this means Alamuddin is walking down the aisle to "Hold the Line." (After arriving late, obvs.)

Who Needs to Attend

Pitt and Clooney are buddies, and Jolie and Alamuddin are extremely classy, intelligent women. They all need to bond and have the most exquisite double dates ever.

THEY, reportedly, SUBLEASED HIS VILLA. If that doesn't equal wedding invite, I don't know what does.

She's probably just going to arrive late so as to not spoil his moment with her star power.

Now get going, everyone! The boats can't wait forever. (Actually, if you're Julia Roberts, they probably can.)