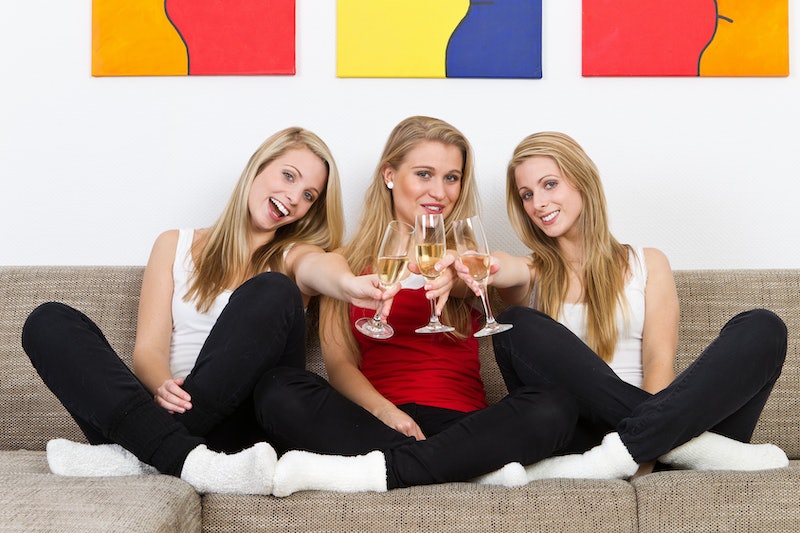 Yesterday, I found myself mindlessly scrolling through an article chronicling the 27 Texts Only Basic Girls Will Understand, from swooning about the hot guy in front of you at Starbucks to making plans to go shopping because you have "nothing to wear." As I perused the article, I realized that I was guilty of sending almost every one of these texts at some point in time, which got me thinking... am I a basic bitch?

I had thrown around the term before in reference to the type of girls you might see on a Saturday night, sipping skinny margaritas and drunkenly singing karaoke to a Britney Spears song, and in reference to one girl in particular who I thought was far too "basic" to be dating a hot guy I knew — but I had never considered how I might feel if it was applied to me. After reading the article, however, and finally registering that I qualified as a basic bitch, I didn't like it one bit. I found both words intensely offensive. I may not be the most self-confident person on the planet, but I am confident enough to know that I am neither basic nor a bitch.

Although I've enjoyed Bustle's (and various other publication's) many lighthearted references to basic bitches, whose authors poke fun at themselves just as much as they tease other people who are obsessed with selfies and going to brunch, I've failed to consider the seriousness that these two little words can carry. They take things that women enjoy, like drinking a frappuccino or sending funny GIFs when we're bored, and turn them into qualities that diminish our standing as unique individuals. What is more, they fuel the stereotype of the twentysomething white female, among other demographics, as nothing more than a vapid, self-centered product of a consumerist society.

And these are just the indications of the word "basic." The word "bitch" presents a whole other distinct set of problems. At the risk of committing yet another act of basic bitch-ery, I'm going to quote Tina Fey's famous line from Mean Girls here: "You've got to stop calling each other sluts and whores. It just makes it OK for guys to call you sluts and whores."

The same applies to calling each other "bitches." It's a term now frequently used to negatively describe assertive or driven women, particularly those in the business world. And although there are some women attempting to transform it from an insult to a compliment, it's a largely pejorative term used to connote rudeness, aggression, or malice. Kanye West of all people calls upon us to consider how we would feel if we called our mothers bitches and I would wager that, even if it's used endearingly, doing so would make us all significantly uncomfortable. If "basic" and "bitch," then, are both hurtful insults, combining them and then using them to target a certain type of woman is no joking matter.

So here's my call to action to both men and women — don't call women "basic," don't call us "bitches," and definitely do not refer to us "basic bitches." Although it may seem funny at times, perpetuating the term can only presage a society where women feel licensed to deride one another, and men eventually follow suit (if we haven't arrived at that point already). What is more, we as women should not feel as if our likes and dislikes relegate us to a certain stereotype or make us any less of an individual. Despite what the media may tell me, it is possible for me to love apple picking and pumpkin spice lattes and still remain the distinct, multi-faceted human being that I believe myself to be.

As my fellow warrior Emma Watson tells us, it's time to take control of the conversation, and stop letting society define us. It's time for women to stop cutting down other women when the media already does this for us. It's time for women to realize that they are extraordinary, that they can never be basic, and that they should never settle for being called a bitch simply because they're assertive or determined. And finally, it's time for women and men to speak out whenever they hear a derogatory term used to describe their female friends. Because isn't that, like, the rules of feminism?

More like this
25 Inspiring Quotes From Black Women To Celebrate Black History Month
By Kyli Rodriguez-Cayro and JR Thorpe
The 3 Zodiac Signs Most Likely To Get Married Later In Life
By Kristine Fellizar
4 Zodiac Signs That Will Take Forever To Admit They Like You
By Kristine Fellizar
24 History-Making Black Women You Probably Didn't Learn About In School
By Ayana Lage and JR Thorpe
Get Even More From Bustle — Sign Up For The Newsletter
From hair trends to relationship advice, our daily newsletter has everything you need to sound like a person who’s on TikTok, even if you aren’t.