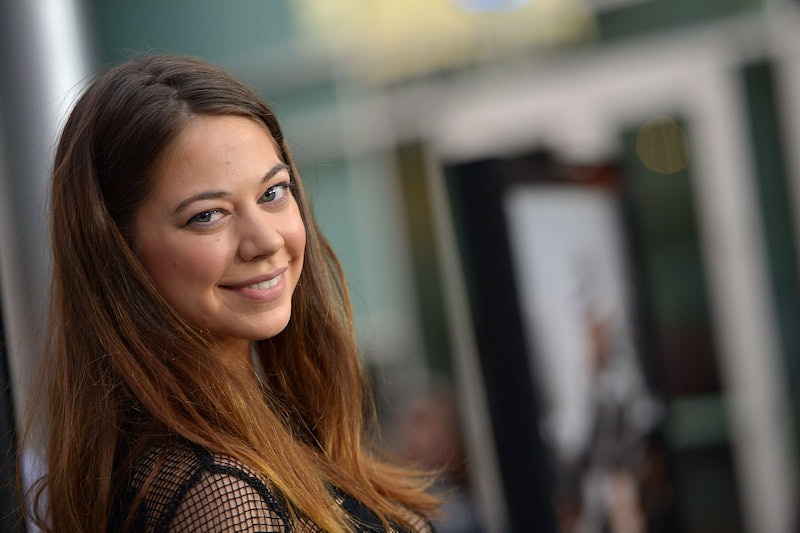 I love when eccentric actresses who have been playing second fiddle to the lead get their own TV show (see Judy Greer) — and Analeigh Tipton is the next to do that. Besides Tipton having a unique (and stunning) look, you probably recognize the star of ABC's new show, Manhattan Love Story , from a few quirky roles she has stood out in. But before becoming an actress, Analeigh Tipton was an ice skater and — more importantly (at least to Tyra Banks lovers out there) — Tipton was a contestant on America's Next Top Model . Manhattan Love Story premieres on Tuesday, Sept. 30 and she plays Dana, a woman new to New York who gets set up on a date with Peter (Jake McDorman). But this isn't just a romcom sitcom: On Love Story, you can hear the characters' inner monologues. And then there's also the special chemistry between amorous co-stars: Tipton and McDorman are dating in real life.

But while you may need some reminders of McDorman's past projects, Tipton should be more familiar. She has had some pretty good taste in roles, which may have helped her land a leading role on a major cable network's new primetime series. Although she's gorgeous enough to be a model (no seriously, she did pretty darn well on ANTM), there's something relatable about the characters she has taken on that is super refreshing to see. But since Manhattan Love Story isn't exactly raking in the critical love thus far, let's go back to the other projects we've seen Tipton in.

As I mentioned, Tipton was in America's Next Top Model in Cycle 11. At first, she was didn't wow the judges, but she grew throughout the season, had a Tyra-praised CoverGirl commercial, and ended up coming in third. (If only she hadn't forgotten her lines for another commercial in the final episode!) She also revealed some unsettling information about how she was roped into a sex trafficking scheme with a Saudi prince before getting on the show. Fortunately, she got out of the situation before anything bad happened.

She did do some modeling after America's Next Top Model, but recently, she's been focusing on acting. As Tipton told the Daily Beast:

I tried modeling, but I really didn't enjoy it ... I showed up to most of my shows in Birkenstocks and T shirts, and it just wasn't my world. I was never graceful in modeling.

She can say she wasn't graceful, but she did manage to turn this:

That looks pretty damn graceful to me.

She put her modeling skills to good use when she did a nude photo shoot for Steve Carell's Cal in Crazy, Stupid, Love. I actually strongly dislike this movie for a number of reasons:

1. I thought it was going to rise above all of the stupid movie plots and give us a realistic view of relationships — instead we got a very movie-like "twist" ending.

2. (Get your pitchforks out) I didn't find Ryan Gosling that attractive in it. I mean — of course, Gosling is attractive, but his character was a douche with a bad accent — just sayin'.

But my views on the movie are not to take away from Tipton's performance. Tipton, in her second movie ever (she was in Green Hornet beforehand in a small role in bed with Seth Rogen), did a great job portraying the awkward, gawky Jessica and she had great comedic timing.

She joined season three of the HBO series Hung as Sandee. She was the fiancée of Jason — a male prostitute who was competing against Thomas Jane's Ray. Although not skilled at charades, she was manipulative in trying to see her betrothed take over Ray's spot. Hung was canceled by HBO after season three though, so there was no closure for Tipton's character.

Tipton played Nora in the adorable zombie romance Warm Bodies. She was the Nurse character to Teresa Palmer's Julie (aka Juliet) in the Romeo and Juliet-themed movie. She fit right into the hip tone of the movie with her fast talking and wide eyes.

Oddly enough, she also put her America's Next Top Model skills to use in Warm Bodies when Nora and Julie gave Nicholas Hoult (my boy! I've loved him since About a Boy) — as zombie R — a makeover.

Well, there's a chance you may not know her from Two Night Stand as the movie just came out on Sept. 26. But, in it, she plays opposite Miles Teller as the pair of them are stuck prolonging their one-night stand for another day as a terrible snowstorm renders New York City incapacitated.

Two Night Stand, along with Manhattan Love Story, marks Tipton's arrival to leading lady status, rather than just kooky side character. And if she could handle the pressure of ANTM, she should be able to handle Hollywood.