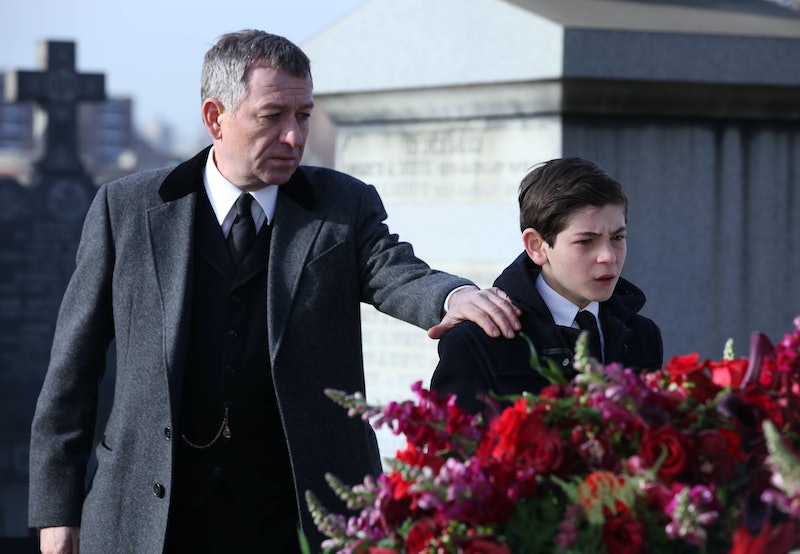 Dun nuh nun nun nun... Batman? Fox premiered its highly anticipated new show Gotham last week and viewers were quickly introduced to a rundown of just some of the Batman villains we'll come to meet as the series progresses, like the Penguin, the Riddler, and a very young Catwoman. The thing about Gotham, though, is that it's not about the caped crusader dealing with these baddies, it's about rookie Detective Jim Gordon fighting the Gotham bad guys. There's not even a single mention of a bat in the pilot, let alone any bat imagery or even bat jokes. Heck, the future Riddler makes a joke about riddles, but we get nothing to suggest li'l Bruce Wayne's future in the pilot. Of course, we still all know what's going to happen to him, we just don't know if we'll ever get to actually see Batman on Gotham .

It's not even a spoiler to suggest that Batman will eventually turn up on Gotham. We all know how this Gotham story ends, because we've already seen it begin a million times; one of the huge inciting incidents in Bruce Wayne's life is the gruesome murder of his parents right in front of his eyes. Considering that happens before the title screen for Gotman, you'd think the show would ponder fast-tracking us to the Batman ending. Wrong. According to series creator Bruno Heller, in an interview with USA Today, we won't see Batman show up until the very end of the series, which he hopes will be in "five to seven seasons."

So mark your calendars, friends. We can expect Batman to arrive anytime between Spring 2019 and Spring 2021 — maybe. In an interview with Entertainment Weekly, Heller raises a pretty good point, when comparing his show to Agents of S.H.I.E.L.D. In the world of S.H.I.E.L.D., all the characters exist in the same space, so it's easy for Lady Sif to pop up for a quick cameo. But that can't happen on Gotham, at least not right now, because "the heroes aren’t born yet." Of course we can't see Batman — he's still a far off distant thought. Heller went further on to say, "What happens with superheroes is they suck all the air out of the room. You can’t play a scene between two people when there’s a guy in a cape and a mask in the corner of the room." A lot happened in Gotham before Batman ever drove his Batmobile through the streets and Heller is set on showing us that, even if it means disappointing fans hoping to see Bruce don a cape. There's still always the possibility of a flash-foward episode, but I bet they won't want to spoil the Bat-surprise until the very, very end. It would be pretty cool if we watch five seasons of Gotham, without any Batman whatsoever, and then the final seconds of the series finale of Gotham are just Bruce Wayne finally saying, "I'm Batman." I'll watch five seasons of that show, simply for that payoff. So I guess if you're a viewer tuning in to see Bruce become Batman, you're out of luck. Either way, I'll keep my trusty signal here at the ready, just in case.