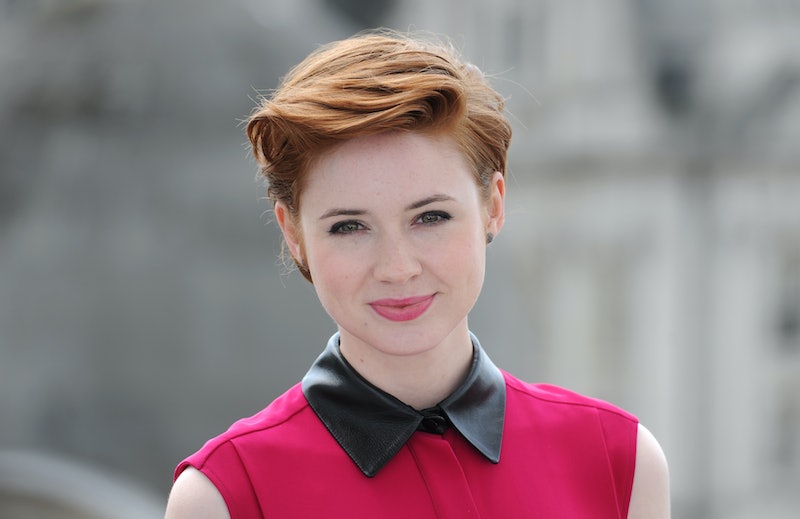 If you're in the market for a new girl crush, I have just the girl for you: Karen Gillan stars in ABC's new sitcom Selfie and after watching the pilot (which is online early), I promise it's not as bad as you probably think it is. Honestly! Gillan's undeniable charm is really holds the show together. I promise! And I'm not just saying that because I already have a huge girl crush on Gillan, but on that note, I suggest that you fall in love with her, too.

I feel bad even referring to her as "new" to television, because she is by no means new to my life, or the lives of countless Sci-Fi loving-folks. Those of us who live and die by the Time Lord know she's the 11th Doctor Who companion; apologies to those of you who do not know what a "Time Lord" is. You're probably totally lost. But no worries, because Gillan is now a member of the network TV family.

So whether you're familiar with the redhead or not, be prepared to start seeing a lot more of her in the coming months. And if you're really lucky, you've already seen her this year: she was in that little movie that did moderately well I guess, Guardians of the Galaxy. And now, she's in for something completely different: Selfie.

And if you're willing to take my advice and sit through an entire episode of a show that appears to be a one trick Instagram joke, I promise Gillan will be your favorite part.

I know that Doctor Who isn't for everyone, but that is her most well-known role to date. She played companion Amy Pond in Series 5-7, and still continues to pop up in Doctor Who Specials, along with providing voices for some of the Doctor Who video games. I know I hate it when people spoil TV shows I've yet to finish binging, so I'll keep mum about Amy's greater role in the Doctor Who canon, but it would be no surprise if we see her pop up again in the future.

SHE SURPRISED EVERYONE IN GUARDIANS

There were a lot of skeptics when she was cast as Nebula in Guardians of the Galaxy. You mean this sweet little Doctor's companion is going to try to fight Chris Pratt? She trained for two months straight — whenever she wasn't needed on set — for the lone fight scene between Nebula and Gamora (Zoe Saldana). And yeah, I think she did a pretty good job with it. Considering she's now part of the greater Marvel universe, there's always a chance she'll pop up somewhere else, too.

And FOR HER ROLE IN GUARDIANS, SHE got serious

Nebula's bald, or whatever the term is for it is out on Knowehere. Upon receiving the role, Gillan was told she needed to shave her head, and she did just that. She showed up at 2013's San Diego Comic-Con in a wig, and after a question about going bald from the moderator, she took her wig off and the crowd went wild. Natch.

First off, props for the adorable pixie cut — still a direct result from the head shaving thing — but she manages to look adorable wearing a turtleneck and what appears to be a pull over jumper, circa GAP 1995 and she is pulling it off.

However, SHE Does take AN EXCELLENT Actual SELFIE

Let's be honest. Not all of us can go full Natalie Portman and shave our heads at the drop of a hat, er, wig. But then, to completely embrace it and rock it? That puts Gillan in a league of her own. What's more is that she's absolutely fierce enough to filter it and post it to Instagram for all to see. Bravo, Karen. Bravo.

All that being said, it comes down to Gillan's premiere on Selfie. Her character Eliza revolves around a life of likes and tagging. So if you watch Selfie when it premiers Tuesday on ABC, keep in mind that she's more than her character: Gillan's actually really funny and she deserves a chance to spread her comedic chops on network television. And you can trust me because I don't joke around when it comes to TV, OK?