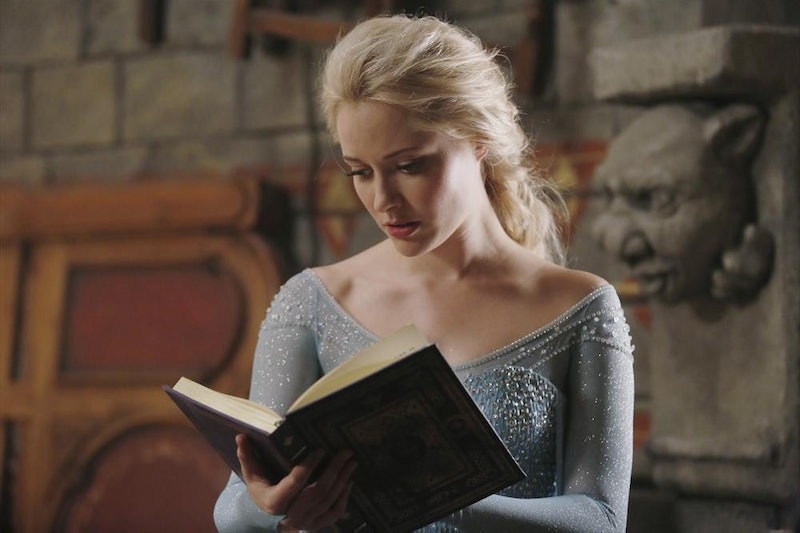 And the plot thickens. Obviously Once Upon A Time Season 4 wasn't going to spring Frozen on us without giving sufficient connections to the already-existing storylines. But it was a surprise to find out that Elsa, Anna, and Arendelle had even more connections than just Elsa being held captive in Rumpelstiltskin's basement. Fans and Bustle writers have feverishly been concocting OUAT-Frozen theories since the Season 3 finale introduced Elsa in its final moments, but on Sunday night, the OUAT Season 4 premiere introduced the biggest connection yet — Elsa and Anna's parents died on their way to the Enchanted Forest. But why were they going there in the first place?

Sunday night's premiere included a major flashback to the events that predated Elsa's imprisonment and a deeper flashback to the death of Elsa and Anna's parents. During which, the show introduced everything Frozen-related that was going down, including Anna's wedding to Kristoff and something else — a diary written by the deceased Queen of Arendelle that detailed her journey. According to the diary, Elsa and Anna's parents were going to "Mist Haven," which ended up being a mysterious, Arendelle-created name for the Enchanted Forest that we know and love so well after many a portal-trip over there. But again, what did it hold for Elsa and Anna's parents that was so important, they risked their lives to get it?

After reading through a short bit of the diary, Elsa realized that her parents were going there to try to help her control or get rid of her powers, telling Anna, "they were scared of me." Obviously, Anna didn't buy it and decided to set out for "Mist Haven" herself, against Elsa's wishes, just before her wedding day. And that's where the flashback ends and returns to Elsa, terrified, in present-day Storybrooke.

The most logical theory about Anna and Elsa's parents' journey is that they were headed to Rumpelstiltskin — The Dark One — to ask him to get rid of Elsa's powers. They were scared for their daughter (I refuse to believe that they were scared of her) and they knew they needed serious help that only the most powerful person in the lands could provide. And that person had to be Rumpelstiltskin, because if Zelena knew a spell to take away Emma's powers in Season 3 and she was trained by Rumpel, then he would obviously know that spell too. Their destination also makes perfect sense, as Rumpel lived in the Enchanted Forest for the entirety of the flashbacks we've seen of his early life.

There's also another option — perhaps Elsa and Anna's parents weren't going to ask Rumpel to take Elsa's powers away, but to help her learn to control and use them properly? I mean, it's possible that they acknowledged that she was gifted and they wanted to help her truly learn to harness her powers. Again, I'm choosing to believe that they wanted to help their daughter, not destroy her. Elsa and Anna's parents couldn't possibly be as bad as the rest of the parents on OUAT, right?