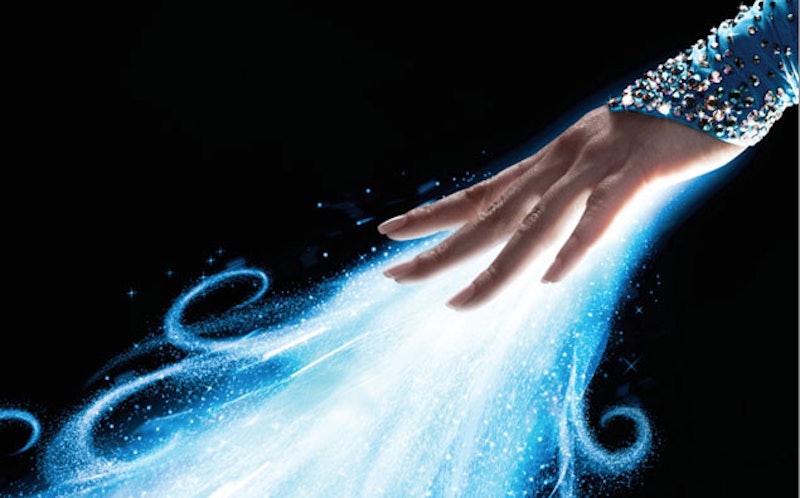 Storybrooke has frozen over. It’s a tagline every Once Upon a Time fan has become quite familiar with these days. With the simple wave of a blue-sleeved wrist, last season's finale launched the start of OUAT 's Frozen adaptation, sending both Disney and ABC watchers into a flurry of excitement. All summer we’ve asked — no, begged — for answers in regards to what Elsa and Anna’s presence would mean for our favorite fairytale characters. And while we’ve been able to chip away at some Season 4 spoilers, a great deal of the story arc remains a bit of a mystery — one that we are more than looking forward to solving. If all magic does, indeed, come with a price, then consider this plot twist signed, sealed, and delivered. Because there’s little doubt in my mind that Elsa’s arrival will spell trouble with a capital T.

Yes, it’s safe to say that everyone’s developed a very strong case of Frozen fever — which is ironic considering the general premise (and title) of the film. But could all of this hype end up backfiring? Like anything that’s been put on a pedestal for four months, fans could end up finding themselves disappointed with OUAT’s take on the Disney hit. I mean, I certainly hope that won’t be the case, but that doesn’t make the possibility any less of a threat. Luckily, there are a few ways to go about making sure such an occurrence never happens. So while we await OUAT ’s Season 4 premiere, here’s everything we want to see during this Frozen crossover to help ensure its success. Make this happen, writers, or face the wrath of an ice-cold ratings drop.

More than likely, our “reformed” Dark One is going to be less than thrilled to see his former captive out and about for all to see. As of now, it’s unclear how exactly Elsa got herself trapped inside Rumpel’s secret lair. For all we know, she could’ve been placed there under her own free will. However, I’m hoping this was more along the lines of a kidnapping type of situation, leaving a now-freed Elsa on the warpath for a little revenge. We all know how powerful the Dark One can be, but how would he fare against this ice queen’s frosty wrath? There’s only one way to find out…

Spoilers indicate that we can expect a Frozen wedding sometime this season between Princess Anna and Kristoff. And while their marital bliss could be on thin ice (at least temporarily) due to a strained relationship between Elsa and her future brother-in-law, fans are still going to expect to see the actual wedding ceremony take place — no matter how fleeting the couple's happily ever after may be. Trust me when I say letting go of this opportunity would be a very big mistake.

Nods to the Movie

Though fans will want the adaptation to be its own entity, they’ll also want the show to toss out a few nods to its Disney film counterpart, which, after all, is what makes this entire storyline possible. Obviously, this doesn’t mean we necessarily want everyone building snowmen while belting out lyrical ballads, but a few “let it go” references would give diehard fans a much-appreciated chuckle.

Elsa’s captivity aside, there are still a lot of other things we have yet to know about this Arendelle ruler — stuff that not even the film has explained. Like how it is that Elsa possesses freezing powers while Anna does not? Is it a genetic trait, and if so, do any of her other family members have it? There’s talk that Elizabeth Mitchell’s character will be Elsa and Anna's mother as well as the possible Snow Queen (which incidentally is the title of Episode 4). However, this is all just mere speculation for now. It’d be nice to gain some clarity on the situation and possibly shed light on Elsa’s backstory once and for all.

This show is known for having a rather complex family tree, so it wouldn’t surprise me in the slightest if these new Frozen characters eventually discover that they’re somehow related to a few of our beloved Storybrooke residents. We’ve already mentioned the possibility of an Elsa and Belle connection, but there are a ton of other ways the writers could incorporate a new family tie. Perhaps Rumpel is Elsa’s half brother. Or maybe Emma is a direct descendant of the Arendelle line, which would help explain how she, like Elsa, appears to be the only one in her family with magical capabilities. It’d be just the kind of shocking reveal that would add another layer of intrigue to an already compelling arc.

It goes without saying that OUAT’s female characters aren’t just strong — they’re downright badass — a trait that we all hope Elsa and Anna possess in equal supply. So whether these lovely ladies all end up becoming enemies or allies (Elsa and Emma will be friends at least), it’s safe to assume that they’ll be quite the force to be reckoned with. To which I say — Bring. It. On.