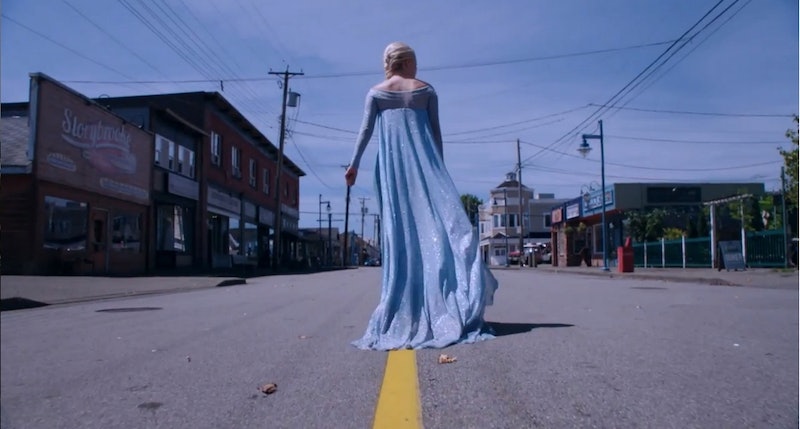 Do you want to build a snowman? Yes, but not while Once Upon A Time Season 4 premieres on Sept. 28 because, let's face it, NO ONE wants to miss this premiere. After months of hype and anticipation, Once Upon A Time's crossover with Disney's Frozen is here and since I can't think of a single person that wants to miss that, you're probably wondering how to watch the OUAT premiere.

I, for one, have spent the better part of the summer months theorizing how Frozen's characters will fit in with our Storybrooke favorites and wondering, as always, whether or not Emma and Hook's 'ship might sink in the new season. But, alas, some things are unavoidable and you might miss the OUAT premiere while you're, I don't know, building an ice castle or something. God, I hate when time gets away from me while I'm building my ice castle.

If you simply can't watch OUAT's Season 4 premiere while it airs — which is probably really painful, especially if you've seen the first eight minutes of the episode on ABC.com — you've luckily got some options. And, no, you don't need to go to the rock trolls to get them. The magical Internet and your cable provider (do you have cable and Wifi in your ice castle?) can help you not miss a minute of what's going down in frozen Storybrooke.

He's got a point.

The great thing about watching online is that you have more options than portals in Storybrooke. First, ABC.com's changed its policy from waiting eight days to release a new episode on its site to releasing it the very next day. So, while you won't be prepared for work the following day to discuss exactly how well OUAT took on Frozen, you'll at least be ready be on Tuesday. And it's simple to get access — you'll just need to login with your cable provider information and the premiere will be just a click away.

If you prefer to use Hulu, the premiere will be available eight days after it airs live on ABC for free. OR if you're a lucky Hulu Plus member or have someone kind enough to share their login with you, you can get the episode the day after it airs on the site. And finally, you can livestream the episode on ABC.com also with your television provider's information. Boom.

Catch It On Demand

Of course, the easiest way if you don't have high speed Internet and want to ice-blast your computer like Elsa every time a video freezes to "buffer," is to watch On Demand.

Most cable providers (if you're one of those people that have cable) offer new episodes of your favorite shows the day after they air. But if you choose this option, beware of the people that might spoil the episode for you. They're out there to ruin your happily ever after and they're not sorry about it.

So you're just going to have to do your best to be your own savior by choosing the right partner, like Hook said.