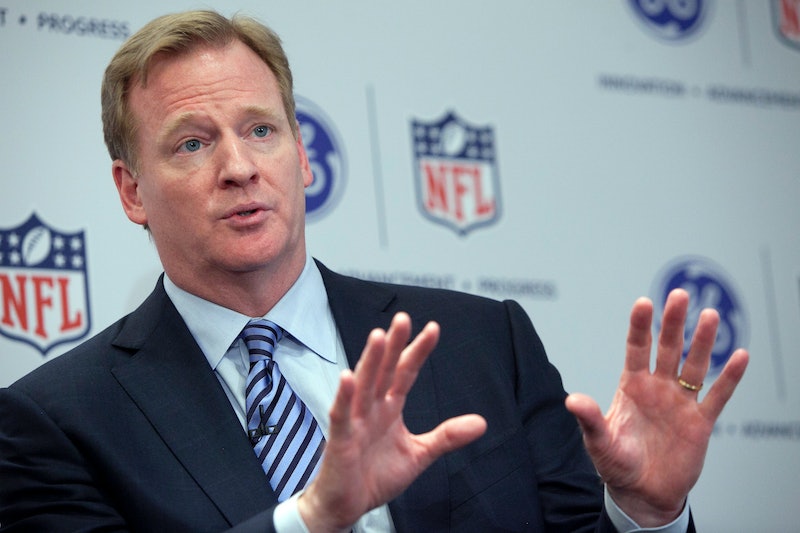 For 40 years, NBC’s long-lived show, Saturday Night Live, has never shied away from tackling — football reference — controversy in the news. Saturday night’s premiere jumped right into one of the most talked about news items recently, when SNL’s opener covered the NFL abuse controversy of Adrian Peterson’s alleged child abuse and Ray Rice’s domestic abuse scandal. Chris Pratt, who hosted the season premiere, played Roger Goodell, the NFL commissioner who seems to completely miss the point on how wrong the NFL has been handling their recent issues.

Pratt’s Goodell first speaks on how the recent months have been a difficult time for the NFL, but thanking those friends who have stood by him. The most notable are the owner of the Washington Redskins and Michael Vic, two people who have faced, or are currently facing, controversy within the NFL. Aidy Bryant’s State of the Union host was speaking to Keenan Thompson’s Ray Lewis, and Jay Pharaoh’s Shannon Sharpe, both who have had their fair share of issues. Both were avoiding speaking on the real issues that Bryant’s character was asking them, which was why these issues keep occurring in the NFL.

The real kicker — there it is again, football reference — in the skit was when Pratt hit it home with the terrible excuses of correcting the NFL’s wrongs in recent weeks. Pratt — as Goodell — announced that the NFL was taking steps on raising awareness for domestic abuse. As he announced at the press conference, the NFL was going to host a “take back the night” march, called “We Fight 4 Women," which Pratt’s Goodell misread as “we fight women." Then after correcting himself, he once again questioned it as “we fight four different women?”

Goodell has been criticized — for good reason — for not taking the appropriate action on Ray Rice after receiving the video of him punching out his then fiancé in an elevator. In a recent press conference, Goodell took responsibility for the “mistakes," but has not thought about stepping down in his position to really right any still salvageable wrongs within the NFL.

Later in the show, SNL did a sketch covering the "new era" of NFL players, as cast members acted as players reading off their names and their crimes. A few notable ones: littering with the intent to murder, sexual assault, treason, punching a mailman — that's federal — and burning down a strip club. Then, Keenan Thompson's player said he hit his wife, where Leslie Jones' character said she "hit his ass right back." The announcers then said that Chris Brown would be the performer later, criticizing even more the poorly picked faces of the NFL and the "new era" that represents the organization.

More like this
Joe Lycett Just Took HIs David Beckham Qatar Protest To A Whole New Level
By Sophie McEvoy
Looks Like Jack Grealish Found The Sandy To His Danny
By Sophie McEvoy
Footballer Jake Daniels Shared His Thoughts On A World Cup Boycott
By Sam Ramsden
'Waterloo Road' Is Back, With More Than A Few Familiar Faces
By Sam Ramsden and Vivian Iroanya
Get Even More From Bustle — Sign Up For The Newsletter