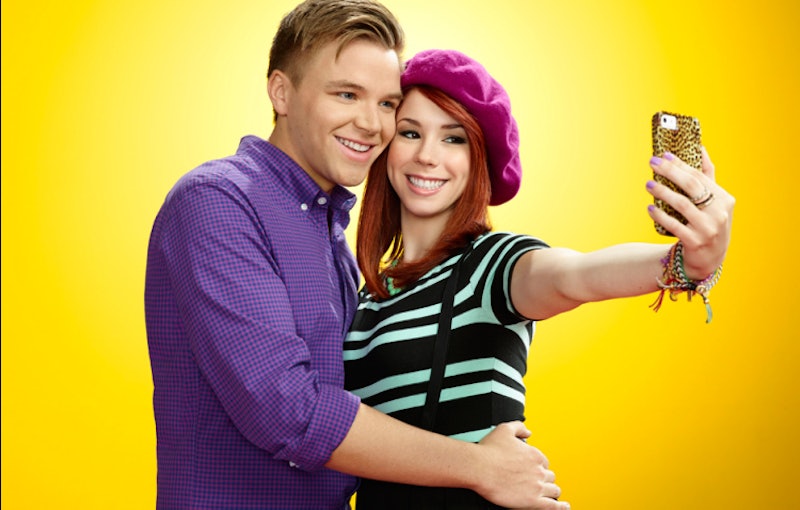 It's true, the second half of Season 4 of Awkward only just premiered, but so far it's been amazing. Matty finally said adios to Eva and figured out that that she was lying about being pregnant to trap him. (Like I've said before, she's clinically insane.) Now that she's out of the picture, we can focus on getting Matty and Jenna back together by the senior prom. Sadie is back to being a terrible person and everything seems back to normal. We still miss Ming and the asian mafia, but it doesn't look like that will be coming back ever. R.I.P. Fred Wu. You are missed. Also, when are Lissa and her adopted brother going to stop hooking up? But one storyline that seems kaput for real is that of Jake & Tamara's relationship.

As the rest of the season progresses we can only hope that storyline does not pop back up into our lives. Jake and Tamara should be over for good. Jakara was by far the worst couple on the show. At first Matty had Jenna and I was like, "OK, Jake and Tamara could actually be a cute couple." And it's a phrase that I would immediately come to regret as Season 3 started. I loved Tamara’s fun, made-up phrases (I still use "adorawhoreable" in every day conversations about celebrities), but combines with Jake, she became one half of the most obnoxious couple ever.

First of all, they got together and were that couple that absolutely no one wants to be around. They were constantly all over each other and saying weird things that normal humans in normal relationships just don’t say to each other.

Then she basically ran his life. I get it, Tamara: you're a control freak, but damn, girl. Nobody wants to be around that. She began controlling Jake's campaign to be the school president, eventually annoying him so much that they decided to run against each other. We knew this relationship, at that point, wouldn't last.

She was more upset about being alone when they broke up as opposed to worrying about the fact that she wasn't going to be with Jake anymore. And since Season 4 began, Tamara has been the absolute worst. Someone needs to pop her some Xanax. Just sayin'.

Jake began Season 4 by singing, which was random, but alright. Tamara was super unsupportive and actually just kind of an ass to him in every way possible. So of course he finally broke up with her because she was being nuts.

After the breakup, Tamara went even more crazy and began to obsessing over it so much she created a fake online profile and made up an Australian girl named Autumn. Yeah, she straight up Catfished Jake into a relationship. Naturally, Jake found and hated her for it. (Rightfully so, might I add.)

The mid-season finale brought the couple back together and they decided that they would remain friends and forget everything in the past, which is fine. It's much better than Tamara acting insane, but they should never ever, ever, ever get back together. In fact, Taylor Swift probably wrote that song about them and not Harry Styles. They were just that terrible together.