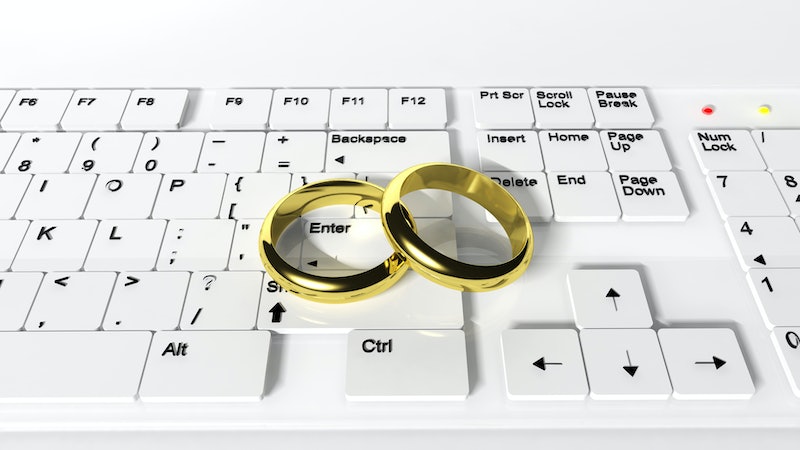 Online dating has just about lost its stigma, and more couples are meeting online than ever before — but the effects of this kind of social environment are not yet well understood. While online dating can certainly lead to meaningful relationships — more than a third of marriages start online — new research suggests that couples who meet online are also more likely to divorce.

A Michigan State University study revealed that online dating may not be the way to go for people looking for a successful, long-term relationship after all. Of the 4,000 couples surveyed, online daters were three times more likely to split from their partners (whether married or not) than couples who met more conventionally. Online daters were also found to be less likely to marry their partners at all. So much for our technologically-facilitated "happily ever afters."

Interestingly, the new study contradicts other research that suggests meeting online actually leads to longer, happier marriages. A study conducted last year by the University of Chicago — somewhat dubiously funded by eHarmony — found that relationships that started online were more enduring than those where couples met in face-to-face settings, but the study wasn't without its flaws; of the 19,000 survey-takers included in the study's research group, online daters were generally older and had higher incomes than "regular" daters.

Possible sponsorship conflict of interest aside, this means that the previous good news about online dating was possibly just an artifact of the online daters' demographics — because it's been previously well-established that the older you are when you marry and the higher your income, the less likely you are to divorce. Even so, the differences in success rates between online daters and "traditional" daters were pretty small (when we should have expected the older and richer online dating crowd to fare much better maritally). According to UChicagoNews, who reported on the study:

So things aren't really looking great for the world of online dating. Still, online dating outcomes may not be quite as bad as headlines will imply. After all, there are also other factors at play (aside from easily measurable ones like age and income) when it comes to online dating. For instance, people who use the Internet to try and find Mr. or Mrs. Right get to be more choosy picking out people with specific traits they want in a partner. But it also stands to reason that people who meet their significant others online might be more likely to focus more on qualities their partners lack, or how they don't live up to online expectations.

There are a few things online daters can keep in mind to help make things a little easier. You may think you're hand-picking your perfect partner out of an enormous pool of applicants, but it's important to remember that fun as it may be to flip through Tinder looking at how many great options you have out there, those profiles belong to real people with real personalities and real problems that are probably not going to be covered in your typical dating profile. Realities don't always meet expectations.

Should you find success meeting someone online, try not to focus on what that person is missing. Studies show spouses are happiest when they idealize each other, meaning they look primarily at each other's good qualities, rather than spend time or energy holding each other up to unrealistic standards.

If you do happen to meet someone online, figure out why that person chose that site as a dating platform instead of choosing more organic social networks. Is he a perpetual commitment-avoider, or just new to the city or too busy with his job to meet many people? This may help you separate the online dating wheat from the indecisive, overly picky chaff. And no matter where you meet, try these research-backed tips for a healthier marriage — besides being unpleasant, divorce can be harmful to your health, so it's best to avoid it... duh.