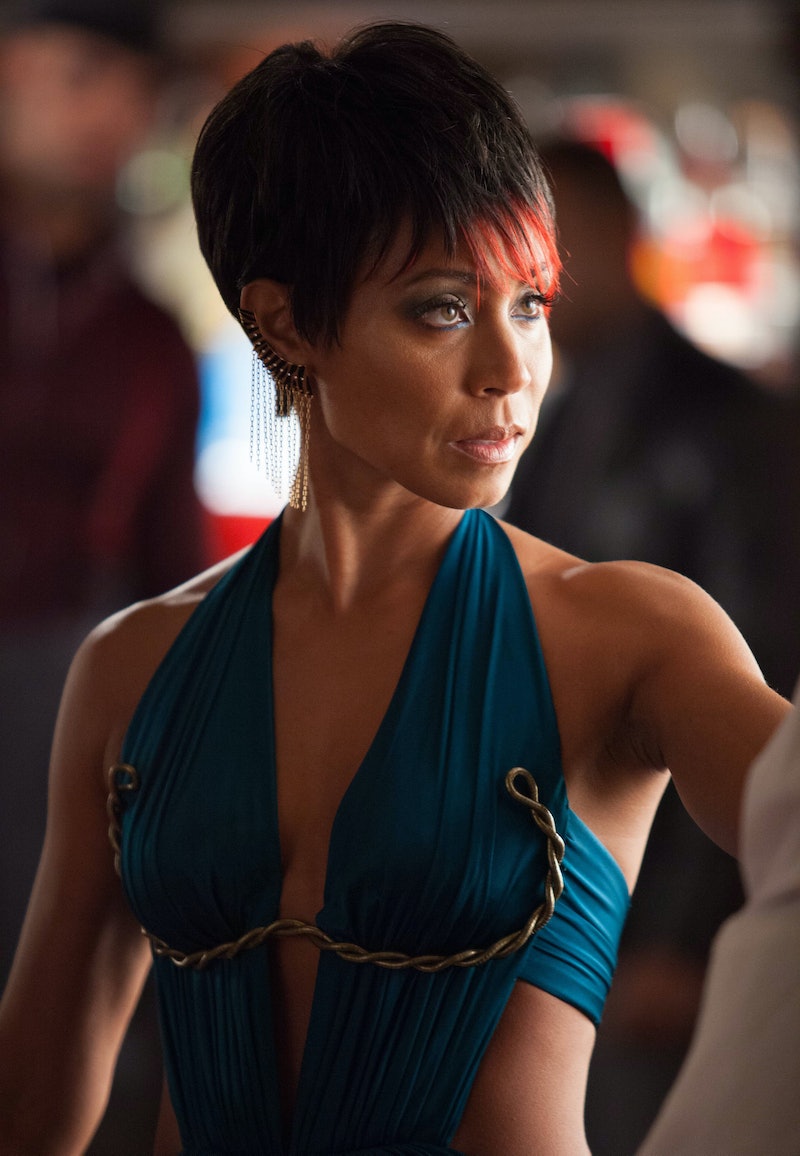 The premiere has come and gone and we still don't know much about Jada Pinkett Smith's mysterious Gotham character, Fish Mooney. She slings a baseball bat. Her fingernails are manicured claws. She's an original character as far as the DC Comics Universe is concerned. However, as original as this story aims to be, you can't have Batman without killing Thomas and Martha Wayne. I'm glad that this series got that out of the way as soon as possible instead of dooming those two actors to multiple episodes in the infamous "Sean Bean" role, just waiting to die. Investigating their murders will be the focus of this series.

As Bustle writer Kadeen Griffiths already discussed, the Batman comic books finally pin these murders on crime boss Lew Moxon and/or mugger Joe Chill. I wonder, could Fish Mooney have hired the Waynes' killer? Could she be the Gotham version of Lew Moxon? Moxon had a grudge against the Waynes. Not only have we seen what happens to those who cross Mooney, but Gordon made an off-hand comment about the killer's shoes indicating a higher class individual with a vendetta. Could it be that simple? I really enjoyed Pinkett's character and the way she seems to be pulling the strings but isn't afraid to do her own dirty work either. What does she have in store? I don't think a character this central to the series could be a red herring. Though, the neon red fish sign on the door of Fish Mooney's club could suggest otherwise.

Maybe Fish Mooney isn't the red herring. Maybe she specializes in creating them via doubt. Upon further inspection, it really kinda does seem like Mario Pepper was the "robber" under the mask that shot Batman's Mom and Pops. That dude has some distinctive eyebrows. So now it's got me thinking that he was double-framed. He killed them, but was hired to do it and whoever hired him wanted Detective Gordon to believe the killer was still out there. Is your head spinning again? Maybe I've been watching too much Inception, but I think the frame was a frame. It'll keep Gordon busy with red herrings of his own. It also provided the push needed to get Penguin out on his own. Even if Mario Pepper is innocent, I feel like Fish Mooney had to have hired this "Joe Chill" character like the original Lew Moxon. It all seemed a little too well orchestrated. A woman that careful would not let a creep like Oswald see her with a necklace if she didn't want him to.

The relationship between Fish Mooney and Oswald Cobblepot (not to be confused with the guy from Sherlock) is so interesting to me. It's a sick kind of maternal relationship and I love it. Don't get me wrong, I'm not relegating her to a nurturing, overtly gendered role. Familial relationships are intrinsic to crime organizations and how often do we see a woman at the head of that? When she banishes him, she says he broke her heart, just like Michael Corleone. Then she broke his leg. Fair is fair.

We know Mooney is good at reading people. We know this because she told Jim Gordon, "You have a little danger in your eye. I wonder what you plan to do with that." Who else in Gotham has a dormant dangerous side? What does Fish Mooney plan to do with them? Is she looking for more wards to take under her claws? Penguin said a war was coming. I think Fish is building an army.

Whether Mario Pepper was framed or not, the result got Ivy's abusive father out of the way. Now that tiny botanist can shine. I think Fish is planning to recruit her. She may already have recruited the young Selina Kyle — we'll find that out this week. The second episode is named after the future Catwoman. Finally, Fish Mooney may have her sights set on little Bruce Wayne, though something tells me that isn't going to work out so well for her.