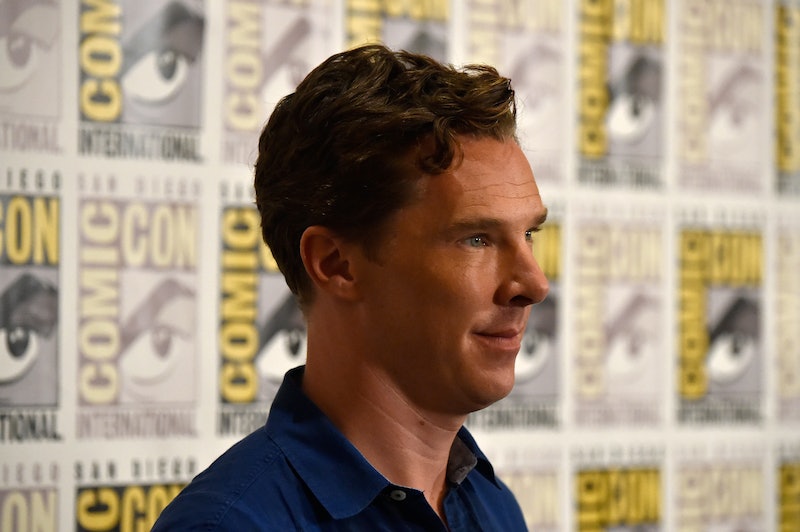 Rumors are now buzzing over Benedict Cumberbatch playing the villain in the upcoming Batman V. Superman: Dawn of Justice. In one of the most anticipated comic book films, it looks like all eyes will be on the Bad Guy. Leave it to good ol' Cumberbatch to totally steal the thunder from two of the most famous superheroes in cinematic history. Sorry Batfleck, this just might not be your film.

However, the actual role or the casting thereof has not yet been confirmed. The news came from a tweet sent by BBC Radio 1 reporter Chi Chi Izundu who wrote, "Benedict Cumberbatch says he's not going to put to bed rumours he's the baddie in #BatmanvSuperman @BBCNewsbeat." Then, Twitter naturally exploded. As you were, Cumberfans, as you were.

It would be no surprise if Cumberbatch landed the role as the villain of all Hollywood blockbuster villains. He's already nailed the maniacal laugh and evil sneer as Khan and Smaug. He also recently took home an Emmy for his starring role in Sherlock and took home Actor of the Year at the GQ Men of the Year ceremony. In short, the man can do no wrong.

As exciting as it would be to see everyone's favorite British export in what will surely be one of the biggest films of the decade, it does have you wonder how he'll ever have the time to keep Sherlock going. Both Cumberbatch and his co-star Martin Freeman have landed big-budget film after big-budget film. They are two incredibly busy chaps. However, it's no mystery that if anyone would manage it, for nothing but the sake of their fans and the love of the work, it'd be Cumberbatch and Martin. Elementary, my dear Watson.

More like this
Twitter Is Overjoyed By Angela Bassett’s Record-Making Oscar Nomination
By Maxine Harrison
The 'Scream 6' Trailer Shows Off Hayden Panettiere's Return & Ghostface In NYC
By Jack Irvin and Jake Viswanath
Hilary Duff Is “Optimistic” About A 'Lizzie McGuire' Reboot
By Alyssa Lapid
Rupert Grint Just Shared A *Major* Update About Ron Weasley’s Future
By El Hunt
Get Even More From Bustle — Sign Up For The Newsletter
From hair trends to relationship advice, our daily newsletter has everything you need to sound like a person who’s on TikTok, even if you aren’t.