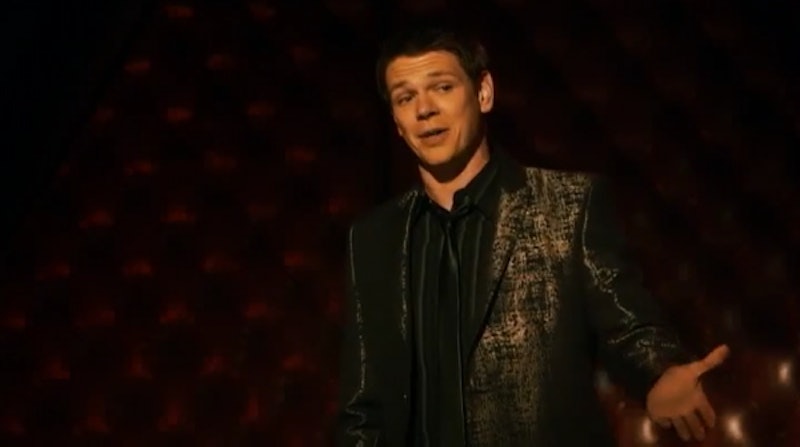 It's going to take another week for me to really get into Fox's Gotham . The premiere was plenty exciting, but it got super cheesy at times too. Right now, I'm writing that off as DC Comics' signature campiness. We can't all be Christopher Nolan, after all. Perhaps Gotham is just the transition we need to mentally and emotionally prepare us for Batman vs. Superman. I have so far enjoyed all of the references and familiar faces planted throughout the seedy underworld of Gotham. Though, in Gotham, is it really an underworld? Seems pretty out in the open to me. Anyway, viewers got to buzzing when a particularly intense scene between mysterious original character Fish Mooney and her henchmen included a stand-up comedian. Is he the Joker?

Mooney owns a club and this wise guy, played by Nickelodeon actor Jon Beavers, was auditioning his rather dark routine. He seemed nervous, but Fish complimented him. That is probably a bad sign, moral compass-wise. Holy foreshadowing Batman, could this joker be the Joker we're all waiting for? I personally don't think so, but I do think this opens the door to how we'll finally meet this foe on Gotham. Stay frosty!

Cory Michael Smith, seen above, plays Edward Nygma, aka the Riddler. He's relatively unknown as well and has the perfect Jim Carrey face. It's not like they are waiting to cast a big guest star for the role. Which would be silly, in my opinion. Name recognition is not how you're going to top Heath Ledger, if at all. However, Jon Beavers isn't slated to be in any more episodes that we know of. To Gotham's credit, that would be a pretty ballsy move to introduce this iconic role in the pilot and then hide him away until it was time to reveal him. So, I'm not saying it's impossible. I'm saying it's unlikely.

The creators of the show have lead us to believe that The Joker will be teased in multiple episodes with different actors and different clues. As someone who loves mystery almost more than she loves answers, I am all about that. So, Gotham fans, be on the lookout for red hoods. Or maybe a hoodie. The Joker first appeared as a criminal called the Red Hood, who fell into a vat of chemicals and went insane. I predict that we'll see a chemical spill one week, a flash of red the next. Maybe this funny man won't be the only one auditioning for Fish Mooney's club.

There's a popular line for this character that goes If "I'm going to have a past, I prefer it to be multiple choice!" It was written for the Joker by Alan Moore, known for both V for Vendetta and Watchmen. Incidentally, Moore's comic is the one that employs the Joker as a stand-up comedian. However, this uncertain philosophy seems to be what Gotham is embracing. Jon Beavers' comic is no more the Joker than Fish Mooney's henchman Butch Gilzean, who was wearing a purple shirt. Actually...