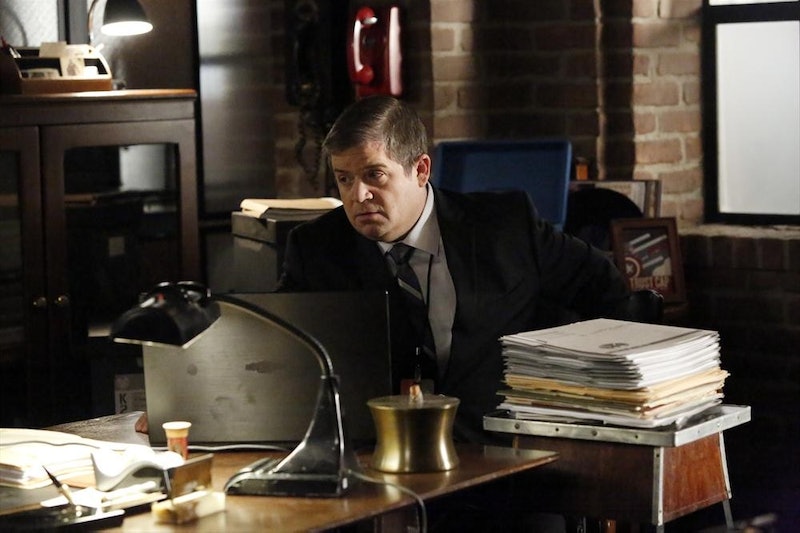 Marvel fans, I am writing this with a heavy heart. I was thrilled when saw that Patton Oswalt would return to Agents of S.H.I.E.L.D. as Billy Koenig, the alleged twin brother of his deceased character, Eric Koenig. His reveal in the season finale was a much needed light moment. But after Tuesday's premiere, I'm a little bit worried. He's one of the only people allowed near Director Coulson on a regular basis, and seems to be keeping an eye on him along with Agent Melinda May. Fitz is jealous of him and that makes me sad. Then, something Agent Triplett said about Koenig stuck out to me and I fear that this goofus might have something sinister to hide.

Trip was concerned about how many identical brothers Koenig claimed to have and what it all means. This could be a variety of things. He could be a clone. He could be a type of android. He could just have a lot of brothers. That's all well and good. However, it was the phrasing that tripped me up. His exact words were "Koenig's always mentioning other brothers. Every day another brother." Doesn't that sound an awfully lot like the Hydra mantra of "cut off one head and two more will take its place"? The mantra that was re-iterated in the episode? Please tell me Koenig isn't a Hydra agent, or a piece of Hydra. technology! My heart can't take it!

Last season, I was curious as to why a good guy with such a strong German name was being introduced at the same time as the Hydra plot, when Captain America showed that Hydra was founded by German Nazis. It turns out there is a connection, as in the Marvel comics, Eric Koenig was a former Nazi who teamed up with Nick Fury and then went undercover in Hydra. So far, so good. At one point he defected back to the Nazis and worked as a spy for the Allies and the Howling Commandos. Eric Koenig was also close friends with Gabe Jones, the Howling Commando who is most likely Agent Triplett's grandfather. Did you notice how, when undercover, Trip named himself General Jones?

Now, this is obviously not the first time that a comic character has been written into a new era in this franchise. Tony Stark appeared in comics well before the US had troops in Afghanistan. Hell, Nick Fury as he stands now is also too young to have been in the Second World War. However, we have now seen four characters specifically from the 1940s appear in the modern era without having aged naturally. I'm talking about Steve Rogers, Bucky Barnes, Dr. Arnim Zola (who was preserved in the computers in Captain America: The Winter Solider) and now a new character played by Reed Diamond, Hydra Agent Dr. Daniel Whitehall. There's still hope for Bucky, but that's currently one out of four in terms of good news. So maybe I wouldn't be crazy to suspect that Eric Koenig was somehow brought over through time for a nefarious purpose involving his many twin "brothers."

I honestly hope that the way Trip's suspicion was phrased was a coincidence or misdirection and Koenig isn't Hydra. But something is clearly up with Koenig. He's way too cheery for a Level 6 Agent of S.H.I.E.L.D. and I don't think anyone should be trusted at this point.

I still love Oswalt and I think his Parks and Recreation filibuster may be the reason Howard the Duck showed up at the end of Guardians of the Galaxy. We at least owe him the benefit of the doubt for that.