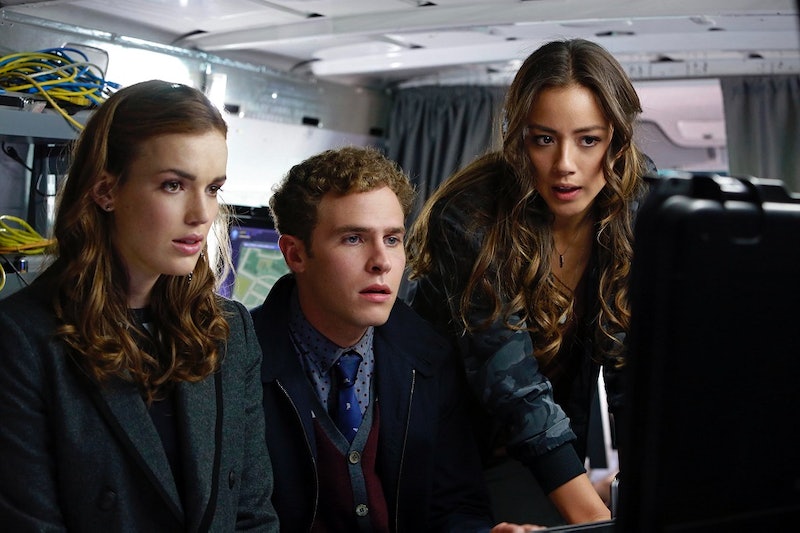 The Marvel Cinematic Universe made its first foray into television with last season's freshman action series Agents Of S.H.I.E.L.D. , which focused on the not-so-"super" heroes behind the franchise's world-saving organization. Despite lots of hype among fans and advertisement from ABC, the first half of the season was widely considered underwhelming after the unprecedented success of the MCU on the big screen. But that all changed after Captain America: The Winter Soldier premiered in April and brought about the downfall of S.H.I.E.L.D. at the hands of the evil H.Y.D.R.A., and it became clear that S.H.I.E.L.D.'s writers were waiting for this bombshell to drop — the show finally stopped spinning its wheels and started tackling more exciting stories of betrayal, danger, and operatives forced to go rogue.

The rejuvenated S.H.I.E.L.D. returns for its promising second season this Tuesday night, so it's time to brush the cobwebs off those top secret files and debrief ourselves on where exactly the show left off. Having trouble remembering who double-crossed whom? Foggy on the specifics of GH-325? Starting to forget which one's Fitz and which one's Simmons? Have no fear. Here's absolutely everything you need to prepare yourself for the premiere, ominously titled "Shadows."

The events of the Captain America sequel reverberated very personally for Coulson's crew, when it was revealed that one of their very own was, in fact, a H.Y.D.R.A. operative: Agent Grant Ward. Turns out a young Grant was recruited by Coulson's friend John Garrett (another double agent); his true allegiance was exposed to the audience when he helped Garrett, aka The Clairvoyant, escape custody by killing Agent Hand. Ward ended the season in the custody of the U.S. government, after a brutal fight with Agent Melinda May (with whom he'd had a romantic tangling) left him with a nail in his foot and a fractured larynx. Will he remain a villain? Or will he somehow redeem himself and return to the team?

FitzSimmons had a close call

Before he was apprehended, Ward sent Agents Leopold Fitz and Jemma Simmons to their apparent doom, when he trapped them in a container and sent them plummeting to the bottom of the sea. Thinking they were about to die, Fitz confessed to Simmons his less-than-brotherly affections for her... a confession that may have been premature, as the scientists were both rescued by Director Fury. At the end of the finale, Fitz remained in critical condition, his eventual fate unclear.

When Skye was shot by the evil Ian Quinn, she seemed on the brink of death, until FitzSimmons managed to save her life with the same serum that saved Coulson after he was stabbed by Loki back in The Avengers. The serum is called GH-325, and Coulson was horrified to discover that its source was some sort of blue alien kept in suspended animation in a tank. The long-term effects of GH-325 on both Coulson and Skye are unclear, although the very last shot of Season 1 featured Coulson, apparently unconscious, scribbling vast amounts of alien writing on a wall.

In the finale's climax, Coulson & Co. battled Garrett, Ward, Quinn, and Deathlok (aka Mike Peterson) at the Cybertek headquarters. Just when it looks like the good guys are losing, Fury shows up — fresh from rescuing FitzSimmons. When Skye manages to secure Peterson's son (who was being held as ransom), Deathlok turns on his creators and helps Fury and the rest defeat the bad guys. He then walks off, determined to redeem himself to his son. A badly injured Garrett attempts a last-minute comeback, but Coulson disintegrates him with an alien weapon. Fury names Coulson the new Director of S.H.I.E.L.D., and he and his team set up shop at a facility called The Playground, which is run by Billy Koenig, who looks exactly like Eric Koenig, the deceased Providence station chief. (A twin? Clone? Life model decoy? Unclear.)

Creepy Raina (you may know her as The Girl In The Flower Dress) turned up almost everywhere S.H.I.E.L.D. went last season. She seems obsessed with anyone exhibiting special powers, and has a high position in the Centipede Group, working closely with the Clairvoyant. But in the last moments of the finale, we may have found out who she's actually working for: she handed a snapshot of Skye to an unseen man with a gross, oozing arm and told him, "I found your daughter." Skye's parentage has been an over-arching mystery of the series, so expect her father's identity to play a large role in Season 2.