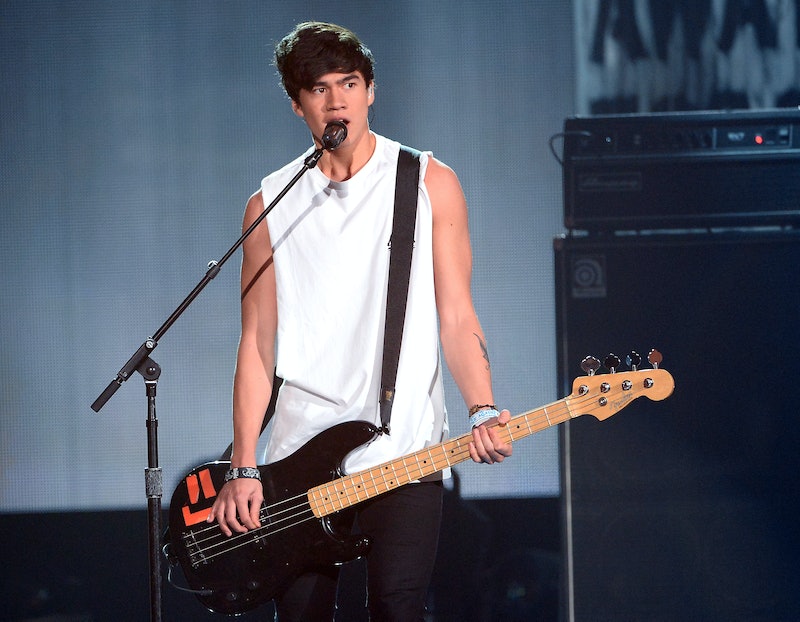 People cannot stop talking about the band 5 Seconds of Summer, collectively as a group and about the individual members. It seems like the boys of 5SOS are popular trending topics every single day on Twitter. But not everything on social media has been fans going wild about their new favorite band, there's been some controversy as well. Cut to Calum Hood, the 18-year-old bassist who made major headlines when a NSFW naked Snapchat made the rounds on the Internet after it was leaked by a female fan on Vine. Hood confirmed that the snap was real via Twitter and has handled the leak in stride. Clearly, Hood isn't shy about exposing his body (at least to the person he sent it to, he wasn't), but the SnapChat scandal led to some other questions: Who else did he send that Snapchat to? Was it a mass Snap or is there actually a special lady of interest? Is there a friend with benefits? Is Calum Hood single and ready to mingle? 5SOS fans are no doubt dying to know the answer, and it is more than a little unclear. So far there are no public confirmations of a love interest from the 5SOS member, but here's what we do know:

He Is Open to Dating a Fan

In an interview with Top of the Pops, the boy band members were asked if they would consider dating a girl who is a fan. Hood was not turned off by the idea and responded by saying, "Yes. If they like our music that would be a bonus."

He Likes a Girl with Musical Talent

Hood has said that if a woman wants to date a guy, they should show off some musical talent. "Guys love a serious serenade, so just whip out some [sings] 'I can be your hero baby.'" It can also be inferred that he wants his girl to be an Enrique Iglesias fan.

He CANNOT Be Just Friends with a Girl

Hood doesn't think that guys and girls can maintain a platonic relationship without it getting complicated. When asked in an interview if males and females can be friends he said, "They can’t — no way. It always happens..." When asked to elaborate on "it," he exclaimed "IT, bro!” Well, alright. So does this mean that if we see Calum Hood talking to a girl or posting affectionate selfies that we should just assume there's something romantic going on?

5SOS fans have noticed that Calum Hood is giving a lot of social media attention to mystery girl named Lucy. Apparently he is pursuing Lucy, Instagram username lucykg, if you want to creep, but their status is very vague. Reportedly, he has been liking a lot of her photos and probably sending a bunch of new followers her way as a result. Given that he cannot be "just friends" with a girl, this could be pretty telling. Or her could be pulling a prank and messing with us all. Who Knows.