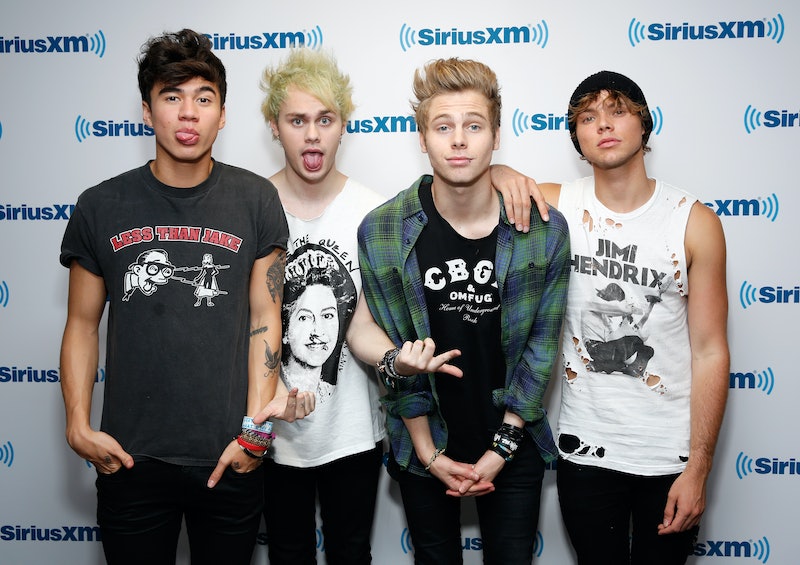 When I fired up Twitter on Tuesday morning, a rather peculiar trending topic grabbed my attention: #5SOSSauceTastesLike. Uh, what's that now? I thought. Is this a #HarryDontLickAnything situation? Why is 5 Seconds of Summer sauce a thing? Should I be scared? Too late, I'm scared. However, my love for the band trumped all of my fears about what I might find. I took a deep breath, clicked the hashtag, and got to reading. After a few minutes of scrolling through the tweets, I happened upon the origin of the hashtag: It is for a radio show contest. Each day this week, KIIS FM's On Air With Ryan Seacrest will reveal a new 5SOS-themed hashtag. And each day this week, fans must tweet answers and include the hashtag of the day in order to be eligible to win the 5SOS meet-and-greet/concert prize package. Monday's hashtag was #IfIWokeUpWithAmnesia, and Tuesday's hashtag is #5SOSSauceTastesLike.

Ohhhhhhhh, I thought. That's way less weird than I expected. Ryan Seacrest just wants to know what fans think 5SOS sauce (5SOS... 5SAUCE... I get it!) tastes like. There is absolutely nothing weird about that!

So, what does 5SOS sauce taste like? Here are some of my favorite guesses:

I noticed "chocolate milk" was a recurring theme in the tweets. I looked into it. This is what I found.

That sounds beautiful, albeit inedible.

Again, had to look into this one. Found out that the band really loves Will Smith.

Well, that went to a strange place.

She has a point: Hot dogs do taste amazing.