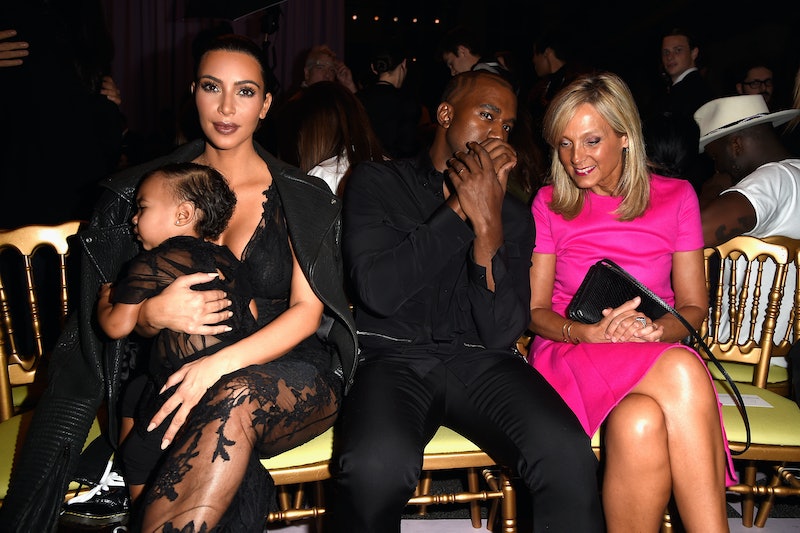 Kim Kardashian has been carrying daughter North West around Paris Fashion Week like the latest accessory. As could be reasonably expected, self-proclaimed Fashion Royalty and inventor of leather jogging pants, Kanye West, and his wife, whom he continues to force feed us as a Fashion Icon, have been carrying on as usual at Fashion Week in Paris, wearing all sorts of uncomfortably dumb outfits. And when I say "uncomfortably dumb" I mean Kim Kardashian's dresses are all just mammogram machines in disguise, so violently are her breasts smooshed down. Don't get me started on Kanye's Jersey-Shore-meets-chevron-upholstery hair cut.

Not content to contain the dickhead-ery to their own selves, Kim and Kanye have also decided that at 14 months old, it's high time their daughter, North West, became a dickhead too. It's a sorry state of affairs when a child doesn't have a choice in whether or not to be a dickhead, especially one as stupidly adorable as North West. But then she didn't really ever stand a chance with parents such as hers, did she?

Being subject to the lunacy of Kardashian life at home is one thing, but it's another thing entirely for North West to be dragged around Paris Fashion Week by her parents like the hottest new accessory they went on a nine month wait list for only to customize it until it's barely identifiable from the original. That's probably the best way to describe North West: bespoke. From her diamond earrings to the lace dress that matches mom's, and combat boots that match dad's, her whole "look" at one show probably (definitely) costs more than I spend on rent per month.

While a lot of babies are probably looking at North West thinking (hopefully nothing. Mamas, don't let your babies grow up to read gossip blogs), "Oh man, what I wouldn't give to spit up over some new season Givenchy," North West looks like she wants to crawl back up into her mom's uterus and never come out again. Here's what I think is probably going through North West's head as her parents force her to be a total tool at fashion week.

1. "MY GOD DAD THAT HAIR CUT IS LIKE, SO EMBARRASSING ME RIGHT NOW."

3. "I SWEAR TO GOD IF RICCARDO TISCI MAKES BABY NOISES AT MY ONE MORE TIME I'M GOING TO STINK UP THE FRONT ROW AT HIS SHOW."

4. "MOMMY'S SUCH A TEASE ALWAYS DANGLING MY FOOD IN FRONT OF MY FACE LIKE THAT."

5. "FEELIN' LIKE AN ANIMAL WITH THESE CAMERAS ALL UP IN MY GRILL, FLASHING LIGHTS… OH WAIT THAT'S BLUE IVY'S MOMMY."

7. "ACTUALLY BLUE IVY CAN KISS MY ASS. I DON'T SEE HER AT ANY GIVENCHY SHOWS, SHE'S JUST SOME CHEAP ASS VMAS BABY."

(Something Nori heard momma say while she was in the womb.)