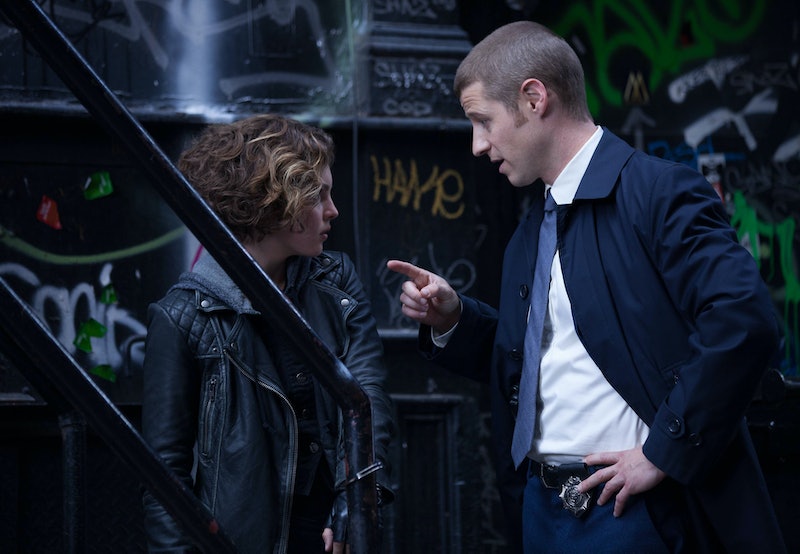 Monday night's new episode of Gotham focused heavily on Selina Kyle, the future Catwoman, who ended up at the heart of the latest mystery the Gotham City Police Department had to deal with when homeless kids like herself began going missing by the dozens. However, by the end of the episode, Selina — or "Cat" as she was calling herself — had dropped a major bombshell on the audience and Jim Gordon. According to her, Selina knows who killed the Waynes, a question that is, as all Gotham fans know by now, the overarching mystery of the series. Could it really be true that we are about to solve it only two episodes into the first season? Not so fast.

The thing is, Selina wasn't lying to Jim Gordon. She is the only person other than Bruce Wayne who was present when the Waynes were shot. She watched the whole thing from a fire escape high above the scene of the crime and could probably tell Jim more about it than the traumatized Bruce could. Technically, she did see who killed the Waynes. However, that doesn't necessarily mean that she knows exactly who it is. When Selina dropped this bombshell on Jim, she was using her knowledge as a bargaining chip to avoid being sent upstate to a juvenile correctional center. Can she really be trusted?

If there was one thing this episode went out of its way to prove, it's that she can't. First of all, not even her fellow street kids know her real name. Second of all, she shows that she was completely willing to lie when she told a police officer she'd say he touched her if he didn't do what she asked. And third of all, she made it clear that she had absolutely no plans to return to juvie anytime soon, no matter what she had to say or do to avoid that fate. And with Mayor James showing Gotham a faux united front by using the latest mystery as an excuse to round up all the street kids and "lock [them up] without a trial," as Jim Gordon put it, there was no way that Selina could avoid that fate without making a big move.

We the audience got to see the Wayne murder happen and the shooter was wearing a mask, not to mention the fact that Selina mostly saw him from the back. It's highly suspect at this point that she has any idea who he was. At most, she can give the police a better — but still useless — description of the perp and maybe anything he was carrying, two leads that will only go so far in this town. But considering the Selina we met in this episode, it's more likely that she will spin as many tales to Jim and Harvey as she can get away with, and then disappear back onto the streets as soon as they take their eyes off her.