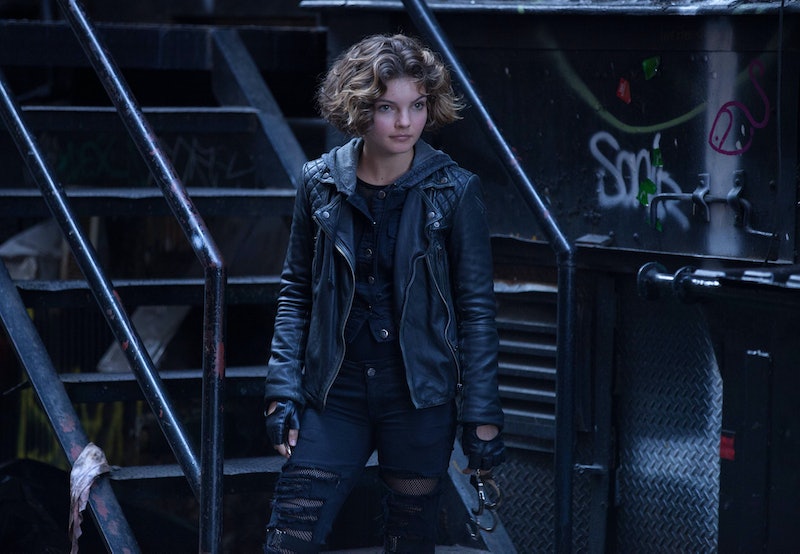 Gotham may be all about Detective Jim Gordon's rise to power as Batman's trusted ally, but when the show premiered last week, neither the Dark Knight nor the future police commissioner appeared in the first scene. No, it was Catwoman who first introduced the audience to the world of Fox's Gotham . You may not have recognized her (she was wearing a hoodie, not skin-tight leather, after all), but that was a young Selina Kyle you saw steal a guy's wallet... and then a bottle of milk (superhero shows would be nothing without their awful puns). We've had multiple iterations of Catwoman in films, but Gotham is pulling their source material mostly from the DC Comics originals. So how did Selina Kyle get her start in the comics?

Turns out, she was there from the very beginning. In Batman #1 from 1940, the very first Batman comic ever written, Batman and Robin catch a cunning female jewel thief (though at that point she's known only as "The Cat"). Batman decides that he has the hots for the villain, however, and lets her go instead of bringing her to justice (I guess even his iron moral code can be compromised when latex bodysuits are involved).

We don't know much about Gotham 's version of Selina ( played by Camren Bicondova) yet, except that she's a 14-year-old petty thief and that she witnessed the Wayne murders. There have been several versions of Catwoman's origin depicted in the comics, because, like most figures in comic books, different writers periodically update her story and reimagine the character.

According to Comic Vine, the original Selina was orphaned after her distant mother committed suicide and her abusive father drank himself to death (apparently artists in the 1940s had a very different understanding of what was "kid friendly"). Selina was forced to live on the streets and steal to survive. Then, once she grew up, she became a sex worker. Yes, that's the backstory the writers decided to go with for this comic aimed at children. It also goes a long way toward explaining Catwoman's dominatrix-esque costumes (though we can also probably chalk those up to the generally sexist portrayals of women, including supervillains, in the movie and comic industries overall).

I get the feeling that most of these writers from the mid-20th century did not have a great grasp of how sex workers actually work, because they decided that Selina's primary profession left her nights free to also become a renowned jewel thief, like you do. Selina was inspired to don a costume and officially become a supervillain after she saw Batman for herself and realized that, like him, she could create a mysterious and frightening persona to hide behind.

Catwoman was a very popular character, but she disappeared from the DC world for 12 years, between 1954 and 1966, possibly because of the creation of the Comics Code Authority. According to the Comic Book Legal Defense Fund, the Code banned "suggestive and salacious illustration or suggestive posture" and "anything that would stimulate the lower and baser emotions." Basically, Catwoman was probably too sexy for the censors, and she was retired because of it. Eventually the ban was lifted, however, which is how we ended up with depictions of the character like this:

My, what a sensible costume for when one wants to commit crimes undetected. Thankfully, Gotham's Selina Kyle is just a kid, so I'm pretty sure there won't be any leather bustiers in her future. At least, I really hope not.