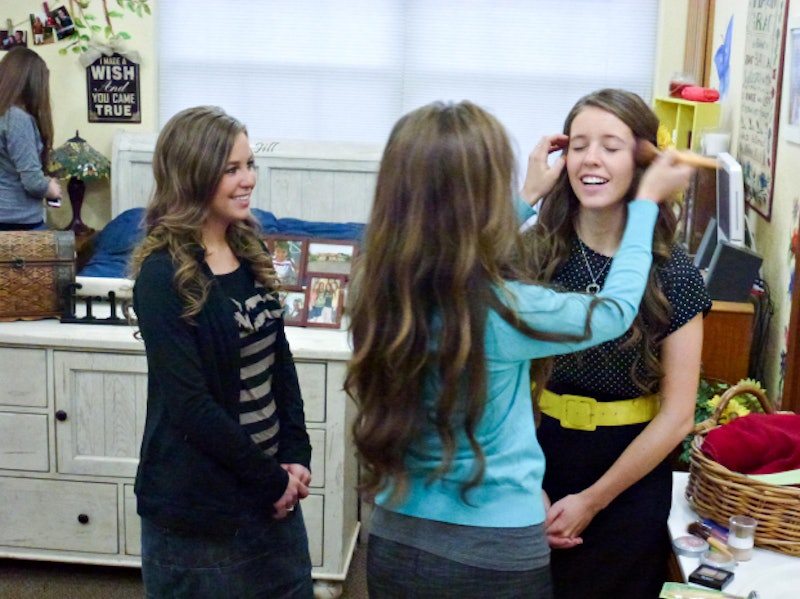 They might be on TV, but the Duggar family isn't really into dressing up in primetime-ready hair and makeup. Most of the time, they're working around the house to take care of their siblings — I mean, they're famous for having a religious family on 19 Kids and Counting — so they really only get dressed up for special occasions. The daughters still love to dress up and style their hair and makeup, but they have to do it in such a way that doesn't disrupt anything else about their lifestyle. With such a big family, it's surprising the Duggars have time to do hair and makeup every morning.

The eldest four girls, Jinger, Jana, Jessa, and Jill, who wrote a book together about the Duggar lifestyle called Growing Up Duggar, cover their beliefs about modesty, which they say is a personal choice.

We do not dress modestly because we are ashamed of the body God has given us; quite the contrary. We realize that our body is a special gift from God and that He intends for it to be shared only with our future husband... We avoid low-cut, cleavage-showing, gaping, or bare-shouldered tops; and when needed, we wear an undershirt. We try to make it a habit to always cover the top of our shirt with our hand when we bend over. We don't want to play the peekaboo game with our neckline.

But honestly, the reason the Duggar religion probably doesn't have a problem with makeup and hair is that their religious beliefs are extremely dictated by the male gaze, and cater to upholding a very strict definition of how a woman should look and act. They are expected to dress modestly in order to avoid rousing sexual temptation in men they come across (rather than, you know, expecting men to have the self control to treat them like human beings), and yet also expected to maintain an attractive appearance by looking feminine in a very particular way. In their book, they admit that some have suffered from a lack of self confidence and worry about their weight and appearance.

While the dress code may be to maintain their modesty, it's dictated by the family shopping list. But their makeup and hair is a form of self-expression. It's the one personal touch they're allowed to decide for themselves. Their clothes are necessarily plain, since the entire family, at least until recently, shops exclusively in secondhand thrift or big box stores — when they're not dressing in hand-me-downs. Some of the older girls, especially Jessa, Jill, and Jana, are experimenting a little with slightly different looks, the rest of the kids are usually seen in plain, logo-free clothes that would not be out of place 20 years ago.

The only exception is hair and makeup for the girls and formal clothes for more important occasions. For example, on this season Jill was able to decide on a short-sleeved wedding gown and to go barefoot at the ceremony. That's a far cry from the long skirts, white socks, and collared shirts they were all wearing back in 2003 in their first appearance on TLC. Compared to that, the Duggars are actually getting pretty hip.