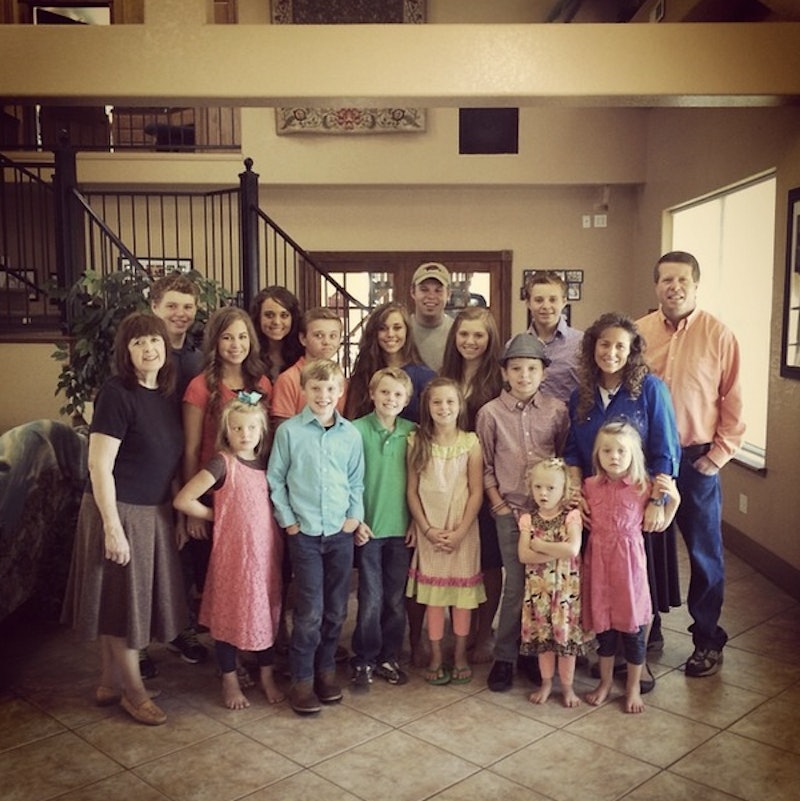 The Duggar family is one of TLC's first and oldest families. On the Duggars' show, 19 Kids and Counting , they're preparing for the upcoming wedding of one of their daughters, Jill. In addition to their family's size, the Duggars are known for their strict religious beliefs, that affects everything from how they dress to how they date. Because of those beliefs, they also don't spend much time on the internet, but the Duggars do have a family blog, where they give advice, check in with various family members, and explain various aspects of their life that many viewers are probably curious about.

But while reading through the Duggars' blog, I realized that some of the posts are pretty bizarre. They cite their religion frequently, but that's not the only thing that makes their perspective unique. Some of their views on shopping, saving money, or even how to have a good time are just plain odd, while others on their religious and political beliefs are extreme and disturbing. All quotes are from the Duggar Family website.

The Duggars love sharing the prices of various products and experiences and giving tips on how to save money.

Another way we cut corners is to always buy used and save the difference. That means when it comes time to shop for clothes, we go to the thrift stores. And we've never bought a new car.

If our couch wears out, I know I've got $65.00 to spend on a couch and we’ll look around. In the meantime, if our couch falls apart, we'll take it out and just sit on the carpet for a while.

So they're probably not shopping at IKEA.

After 30 years of marriage, they go for practicality over big gestures.

We spent the rest of our honeymoon fixing up our little house, which definitely needed a lot of work!

At the time, our church was still being built so we were meeting in a big gymnasium for services. We actually got married in the hallway of the building -- we had set up folding chairs to use as pews! And we did the exact same thing when we renewed our vows 25 years later.

The reception was very simple with cake, nuts and punch.

Referring To Discipline as "Correction"

We’ve really chosen to focus on praising our kids for good character, for Godly character. And as we do that, we find that we have a lot less trouble with correction...

You praise someone publicly, but if you’re going to have to correct someone, you correct them privately.

Then our children learn to praise by example. And so there’s a lot less correction going on.

It's unclear what exactly correction means, but it definitely doesn't sound good.

Give Advice to Younger Generations

Michelle shared her wisdom about how to keep a marriage together, which seems like a lot of pressure to put on a young newlywed:

… [W]hen you are exhausted at the end of the day, maybe from dealing with little ones, and you fall into bed so exhausted at night, don’t forget about him because you and he are the only ones who can have that time together. No one else in the world can meet that need. And so be available, and not just available, but be joyfully available for him. Smile and be willing to say, ‘Yes, sweetie I am here for you,’ no matter what, even though you may be exhausted and big pregnant and you may not feel like he feels. ‘I’m still here for you and I’m going to meet that need because I know it’s a need for you.’

In case that subtext wasn't clear enough… she's talking about having sex whenever her husband wants it. Even if she's "big and pregnant."

While we do go to pumpkin patches and corn mazes, we don't do the Halloween thing. From the beginning of our marriage we just kind of felt like we didn't want to celebrate that holiday.

We read a book by S. Truett Cathy, the man who started Chick-fil-A, called How Did You Do It, Truett? His recommendation is that when somebody says thank you, instead of saying, “You’re welcome,” you say, “My pleasure.”

Training a strong-willed [child] to obey was probably the greatest challenge I faced as a mom.

The Duggars do some things on their 20-acre estate that seem totally foreign to the rest of the US sometimes.

Remind Us of Their Scary Political Beliefs

Their highly conservative views blend politics with their personal religious beliefs, and son Josh works for the Family Research Council, which fights to keep LGBT people from gaining all of their civil rights. And they work with LifeUnited.org to fight against a woman's right to choose.

In terms of supporting candidates, we pray about who we really feel like we need to get behind.

It dawned on us that there is a holocaust taking place right here in America! More than 56 million lives have been destroyed in our country! That is over 4000 babies being killed and 4000 women being wounded each day!

That's the dark side of the Duggars, and it's hard to ignore — even if some of their other tips are goofy and harmless.