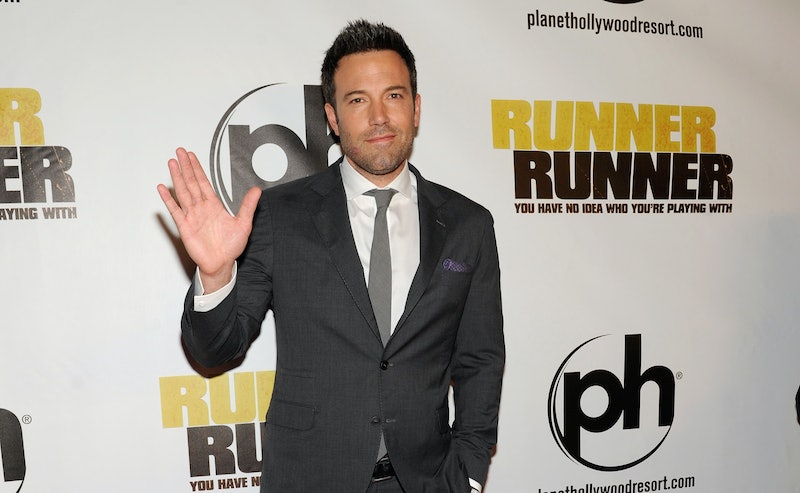 If you've been looking forward to seeing Gone Girl in theaters (jeez, who isn't?), then you've probably been avoiding spoilers on social media platforms/digital land mines like Twitter and Facebook. While critics and audiences who have attending screenings of David Fincher's deliciously dark take on Gillian Flynn's page-turning bestseller about a marriage gone terribly awry have respectfully kept mum about the story's many twists and turns there's one thing they couldn't keep to themselves: audiences will get a glimpse of Ben Affleck's penis in Gone Girl. Yes, that's right, the Oscar-winning star doesn't just emotionally bare all as an accused husband caught in a media firestorm, Nick Dunne.

Honestly, it's a blink-and-you'll-miss-it moment, and in a pop culture landscape where female nude scenes are discussed ad nauseam, the chatter about Affleck's scene will barely balance the scales. In an interview with MTV News, Affleck said of his nude scene, "David [Fincher] said to me from the beginning this is a ‘warts-and-all’ movie. You can’t have any vanity. You have to see the naked underbelly of this character." He continued and joked about what he calls a "very brief" scene saying, "The penis is in there! It costs extra. It's IMAX penis. You have to pay $15 to see it in 3D, [but] it looks better in 3D!"

While Affleck himself has now opened up about his debut on-screen nudity, others have hinted at his, er, package, off-screen in the past. Affleck's wife Jennifer Garner joked to Vanity Fair that they keep "sexy Polaroids" of each other, while earlier this year Two and a Half Men's Chuck Lorre cracked at the PGA Awards that he got a look at Affleck's manhood in the bathroom and declared "He can play Batman!" Affleck hilariously responded to the rumor by stating, "Spread the word. I am often confused with Matt Damon but rarely with Michael Fassbender, so it was a nice change!"

Gone Girl marks Affleck's first full-on nude scene, and you better believe the other people that got a sneak peek (so to speak) had some thoughts on the moment that's bound to get people talking. Well, it being among the many other eyebrow-raising moments that happen in Gone Girl that will get people talking.

More like this
Jamie Foxx Revealed The Question That Got Cameron Diaz To “Un-Retire”
By Grace Wehniainen
21 Photos Of Ben Affleck Holding Coffee, Cigarettes, Or J.Lo’s Hand
By Marina Watts
Florence Pugh Won’t Discuss Harry Styles Sex Scenes In 'Don’t Worry Darling'
By Grace Wehniainen
Jennifer Coolidge Just Said The Most Controversial Thing About Legally Blonde’s “Bend & Snap”
By Maxine Harrison
Get Even More From Bustle — Sign Up For The Newsletter