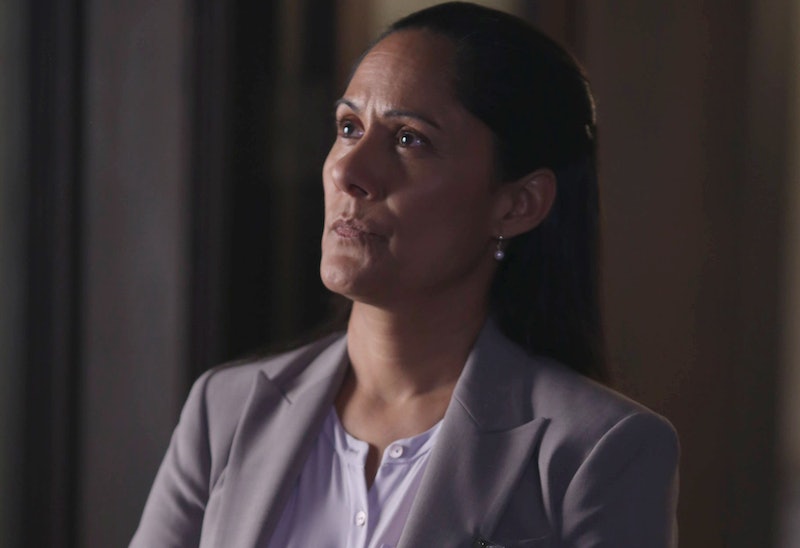 Fox's hit supernatural drama premiered Season 2's second episode "The Kindred" on Monday night, and the newest character of the series proved to not only make an impression that will affect every single one of our favorite characters, but one that will also make their preventing the coming apocalypse a little bit harder. The town's newest head of the police department entered the picture in the form of Sakina Jaffrey as Sleepy Hollow's no-nonsense Sheriff Reyes and while she might not be as open and willing to accept the strange, supernatural events occurring in her sleepy town and arrested Jenny for firearm possession, that doesn't mean she's evil.

But while the character itself is quite intriguing and will hopefully be around for a long while to give Ichabod, Abbie, and Jenny a hard time, the actress portraying her has been showing off her immense talent for quite a while.

So where have you seen Jaffrey in the past?

Well the most obvious and most recent place is more than likely another popular TV series: House of Cards. That's right Jaffrey plays former White House Chief of Staff of President Walker, Linda Vasquez. For those who watch House of Cards (which seems to be everyone lately), Vasquez was a bit of a thorn in Frank Underwood's side except for when she was getting his help with Walker's administration (help that turned out to be harmful for the former President) and when Frank was getting her son into Stanford.

She's Hung Out With The GIRLS

But that's not the only place you've seen Jaffrey. She's also appeared in numerous other TV series from a gynecologist on Girls, to Mohinder Suresh's mom on Heroes, to different characters on Law and Order: SVU. She also appeared in films like Ryan Reynolds' Definitely, Maybe and The Manchurian Candidate.

The funny thing about Jaffrey is that her two biggest roles of recent years have had the actress playing characters of Hispanic descent while the actress is actually South Asian. But with her talent, maybe it's not so strange to see why she was cast?

Hopefully, we'll get many more episodes of Sleepy Hollow feature Jaffrey's Sheriff Reyes as it will be interesting to see Ichabod and Abbie fulfill their roles as witnesses and their task of stopping the apocalypse now that they no longer have free reign at the police department. Now is the time for the team to get clever, both the team of Ichabod and Abbie and the team of Sleepy Hollow writers. If what they've shown us from Season 1 is any indication, I out all of my faith in their hands.