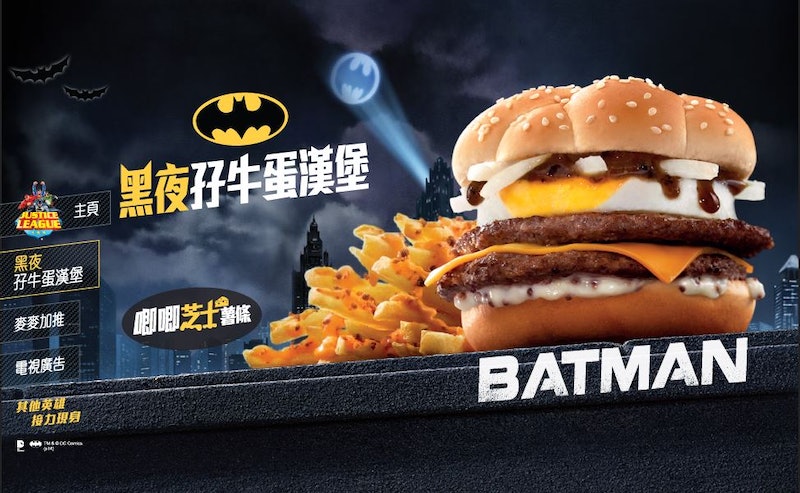 Apparently unconnected either to the recently debuted Gotham television show or the upcoming Batman vs. Superman: Dawn of Justice movie, the Diner Double Beef Batman Burger looks like quite a creation: It features two beef patties, a fried egg I’m going to hope is made fresh and not just pulled from the leftover breakfast lineup, cheese, onions, and some sort of mysterious sauce. You can finish off your Batman-themed dining experience with “Squeezy Cheesy Fries,” AKA fries with some sort of Cheez-Wiz-esque substance squirted across the top. I didn’t think it was possible to make crispy, golden fries unappetizing, but, well… I stand corrected.

Not only that, but it’s not the only DC superhero burger McDonald’s Hong Kong has up its sleeve. According to Grub Street, the Batman burger is just one of a whole line of Justice League-themed menu items planned; upcoming choices include a Superman burger, a Wonder Woman burger, and an Aquaman burger. I don’t know what any of these burgers will entail — but the Aquaman one had better be a spin on the Fillet-O-Fish. If it’s not, there’s something seriously wrong with the world.

For the curious, here's a peek at the ad for the Diner Double Beef Batman Burger:

It’s been many a year since the Bat has backed a McDonald’s product; nearly 20 years ago, the fast food chain added the “Superhero Burger" to their Taste of the Month series. Featuring three patties, two types of American cheese (white and yellow), tomato, lettuce, onion, and mayo in a hero sandwich-shaped bun, it was available for a brief and shining moment in 1995. The ads for it featured Batman and the Batmobile as a tie-in for Batman Forever. Many people remember this burger fondly; as is the case with a variety of retired junk food products (I'm looking at you, Surge), an online movement comprised of fans desperately want McDonald’s to bring it back. To be fair, the commercial was pretty cool:

I only have one question about Batman’s drive-thru habits: The Batmobile is rather low to the ground. Does that make it awkward when trying to retrieve your food through the service window?