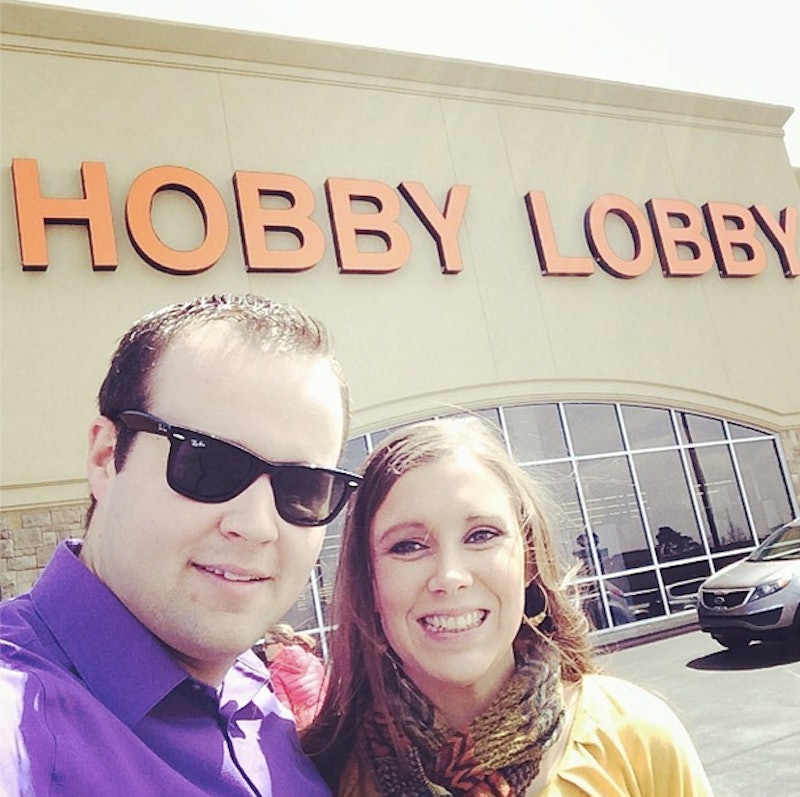 Let me get one thing straight: Although I will admit I'm absolutely addicted to TLC's 19 Kids & Counting , I definitely don't take everything the Duggars say as gospel. Actually, I see most of their views as downright archaic. Not only is there a serious lack of feminist thought in their family, but they also fight against women's rights and shun the use of birth control, which is dangerous in itself... and, yeah, it's not exactly surprising that they're also against gay marriage. What is a little surprising? The way eldest son Josh Duggar is willing to speak so openly about gay marriage when he feels it's actually a "special right" instead of an equal one.

So it's not exactly a secret that Josh sees himself as a pioneer for what he considers "family values." In fact, that's what his career is about. In case you missed it, he's no longer the proprietor of his used car lot in his family's Arkansas hometown. He and his wife Anna have moved to DC, where Josh is working for The Family Research Council, aka getting paid to lobby against abortion and gay marriage. But in 2013, he said some pretty despicable things against gay marriage when he chatted with a radio show... and if you're already offended, fair warning: it gets even worse.

First, let's review what Josh said, thanks to Crushable:

I have an aunt who has chosen to live that life and I love my aunt. I think she is an amazing person. It’s not about equal rights, when we’re talking about policy, when we’re talking about these things, it’s really about special rights, a lot of these people want. And my aunt is one who has told me that she is not for all these measures that are being pushed when it comes to marriage and things. She believes that marriage is between one man and one woman.

Part of me doesn't want to touch that statement with a 10-foot pole, but the other part really wishes I had a direct line to Josh so I could tell him exactly what I think of him after reading his comments. A fundamental right to marry someone you love is not getting special treatment and it's definitely not OK for Josh to drag his aunt into his own political views, especially since she seems to have stayed away from the Duggars' media spotlight.

I don't think we've seen much (if any) of the aunt Josh is talking about on 19 Kids and Counting and she hasn't said anything about this publicly (that I've been able to dig up, anyway). Michelle and Jim Bob developed her religious beliefs independently from their families, so we really don't know what Josh's aunt actually thinks about this whole situation.

And while we're talking about Michelle, I cannot stop myself from calling attention to her transphobic automated messages to voters in August that encouraged stopping transgender women from using women's restrooms, using some sort of convoluted threat of pedophilia as an excuse.

I am cringing in every possible way right now, and I really hope that Josh's aunt is able to find the support she needs outside of that particular branch of her family. Duggars, I love your show, I love your adorable children, and I love your flawless hair. But I do not love your beliefs and this is taking it way too far.