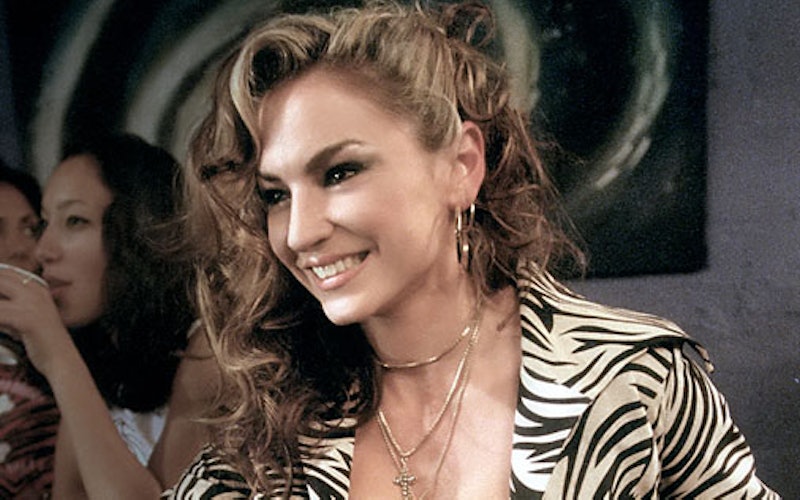 The Sopranos ' Adriana La Cerva, played by exquisite angel Drea De Matteo, is my style icon. I know what you're thinking – "That tacky bitch?" – but bear with me, because I'm about to change your overly-cultured, bougie-fashion mind.

I wasn't ever allowed to watch The Sopranos when it was first on air (I was 14 and my mother is a sensible woman), but teenage me would have gagged to have Adriana's wardrobe, bad hair highlights and ridiculously overly-manicured talons inclusive. She was like an Italian, bad Britney Spears. And in 1999, the only thing that would have made Britney Spears better was if she had been both Italian and bad.

Watching The Sopranos now I feel the teenager within me falling deeply and madly in love with Adriana for her good-girl-gone-kind-of-bad-but-also-kind-of-the-biggest-confused-sweetheart personality as well as her impeccable mob girlfriend style. From her cleavage-heavy crop tops that lace up the front to her amazing collection of ankle breaking stilettos, if I didn't know any better, I'd quit my life, find a mafia guy, fill my wardrobe with butt grazing, animal print, stud embellished body con dresses and start wearing brown lipliner. Don't tell my sensible mom that I said any of that.

Adriana's style is so horrible it's brilliant, and maybe that's got a lot to do with the way Drea De Matteo carries it off. I mean, I never thought a tiger print denim jacket was something I desperately wanted until I saw her wearing one on the show. With matching pants, no less. It might seem illogical to call such gaudy style completely and un-ironically covetable, but there's good reason. Here's why Adriana La Cerva is my ultimate style icon, and why she should be yours too.

Before there was Cara Delevingne, there was Adriana La Cerva and those perfect, impeccable eyebrows that speak entirely for themselves.

Adriana's hair was larger than life, and while her highlights might have been less than natural, her curls were always flawless. Plus, she had the slicked-down-on-one-side-big-on-the-other look on lock when Rihanna was still in high school.

Back when it was hot to be fit rather than skeletal, Adriana had some of the most iconic abs of the 90s. Although it's hard to believe the woman was as athletic as she was with all the cigarettes (cool) and alcohol (cool) and heroin (not cool, sorry Ade.)

She was also super tan which was hot in in the late 90s/early 2000s; back then the axis of caring about skin cancer was negatively proportionate to how good your tan was. It was also a much simpler time when fake tanning was a completely acceptable activity for women to partake in. No pale waif could ever pull off Adriana's wardrobe anyway.

Her Penchant For Head To Toe Animal Print

Adriana put Fran Drescher, Dawn French and Jennifer Saunders and even doppelganger Drita D'Avanzo to shame with her commitment to animal prints. When I was 15, I had a pink faux snakeskin tube top and matching flared hipster pants, and I'd happily wear it now (if it still fit), hunt down Drea De Matteo, have her wear Adriana's tiger print onsie and then we'd go to The Crazy Horse in New Jersey and drink lurid colored cocktails while watching bands that could only be described as "a poor man's 3 Doors Down". DREA IF YOU'RE READING THIS, CALL ME.

The Way She Just Owned It

Whether it was a black pleather mini dress, stripper heels presumably borrowed from one of the Bing girls, eleventy bajillion gold necklaces worn at once or a matching sweatsuit and natural face, Adriana was a woman that just owned it. Her life might have been a mob girlfriend nightmare, but she walked through it with an unapologetic sense of style. Call it what you will — tacky, cheap, vulgar — those descriptors are entirely fitting for Adriana's style. But here, they're not derogatory, they're part of what make's Ade's style so wonderful. Now I'm not about to go full New Jersey gangster GF any time soon, but I wouldn't say no to a pair of leopard print pants or a PVC skirt.

More like this
This 'One Tree Hill' Wardrobe Error Is Going Viral On TikTok
By Brad Witter
This 'Bachelor' Contestant Had The Best Reaction To Wearing The Same Dress As Another Woman
By Grace Wehniainen
15 Of Carrie Bradshaw’s Best Handbags From Sex & The City
By Dominique Norman
Kate Middleton Wore The Ultimate '90s Power Suit
By Sam Ramsden
Get Even More From Bustle — Sign Up For The Newsletter
From hair trends to relationship advice, our daily newsletter has everything you need to sound like a person who’s on TikTok, even if you aren’t.