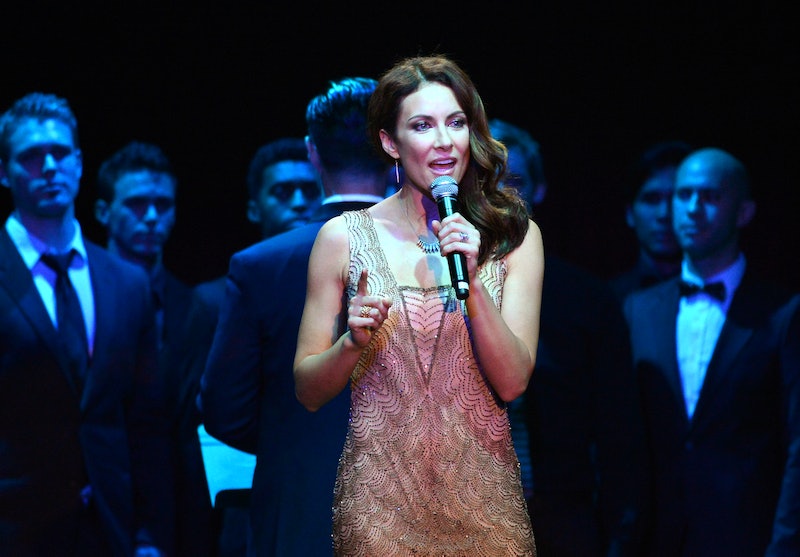 Finally on Wednesday night, Tony winner (and three-time nominee) Laura Benanti joins Nashville as Sadie Stone. I've been excited about this for a while, and not just because Connie Britton's Rayna Jaymes needs a friend right now. Laura Benanti is crazy talented and a relatable weirdo to boot. Are you following her on Twitter? Do it right now. She's not the only theatre talent to tear it up on the ABC drama series, either. Broadway's Will Chase has been stealing scenes and hearts as Luke since last season. It's delightfully fitting, because only about a year and a half ago, Benanti and others told Will Chase to "suck it" during a Tony Awards bit ragging on television.

In honor of her Nashville debut, let's take a look back at Laura Benanti's musical history. I have vibrato for you. I have belting. I might have whatever "mixing" is. I also have rap for you. Can Benanti handle some country music twang? By the time I'm done, you won't be asking that question.

Laura Benanti got her musical theatre start at 18, when she was cast in the Broadway revival of The Sound of Music as Maria. She'd later return to The Sound of Music in another role and whole new format, but more on that in a minute.

Anyway, Benanti also appeared in Nine with Antonia Banderas and played the Drew Barrymore role in the Broadway musical adaptation of The Wedding Singer back in 2006. She won a Tony for Gypsy in 2009. That's the revival with Patti Lupone, not the revival with Bernadette Peters. It's hard to keep track sometimes. Benanti has also done musical Shakespeare in the Park and originated the role of Candela in Women on the Verge of a Nervous Breakdown. It's pretty spectacular that she's had the time to have a film and television career as well.

In 2002, Benanti starred in the Broadway revival of Into the Woods as Cinderella alongside Vanessa Williams, who played The Witch. It's one of my favorite versions of the Cinderella story because it gives Cinderella agency and a choice to make. She's not just clumsy and naïve. She's anxious, yet ultimately deliberate. I'm looking forward to what the Into the Woods movie does with the character, but this is not about Anna Kendrick for once, is it? This is about Laura Benanti! If you can stand the bootleg quality of this video, do check out Cinderella's big song "On the Steps of the Palace."

That's a good taste of her musical theatre chops. Let's get into other genres. I love Sondheim as much as the next nerd, but he has a specific style. Benanti was briefly married to The Spin Doctors singer Chris Barron, but we don't need to talk about that. Instead, let's watch her sing pop songs with fellow Broadway stars Lauren Molina and Nick Cearley's band The Skivvies. This is a mash-up of the Destiny's Child tune "Bootylicious" and Adina Howard's "Freak Like Me." Girl's got range!

Nashville won't be the first time that Laura Benanti has sung on a television series. You may recognize her face from a variety of guest appearances. She has lent her voice to the short-lived series The Playboy Club and also one episode of Eli Stone where she serenades Jonny Lee Miller's title character. She also played a singer-songwriter on the 2005 FX series Starved. Benanti has been all over and yet is still relatively unknown outside of the theatre community. Spread the word, y'all! She told this story in a Huffington Post interview this April:

I recently sang in Florida at a benefit, with a half-hour set, and a man next to me turned and said: "So what are your goals?" And I said, "What are yours?" I mean, isn't all this work enough? Isn't this enough?

Last winter, Laura Benanti's appearance on NBC's The Sound of Music LIVE blew up Twitter, when her charisma, talents, and costumes caused some viewers to "jump ship" and root for her character, the Baroness Elsa Schrader, to end up with Captain Von Trapp instead of Maria. Here she is, with True Blood's Stephen Moyer and Smash star (forever in tech) Christian Borle, singing about the inevitability of a Nazi takeover in Austria. Real upbeat stuff.

Do you want to hear Laura Benanti rapping as promised? I can do that for you. But you're gonna get some heavy Sondheim references with it. This is an hilarious installment of Benanti's vlog for Playbill.com "Life With Laura," in which she takes to Times Square as Fosca from the musical Passions and tries to get folks to take pictures with her. The theme rap was written by composer Lin-Manuel Miranda, who is only an Oscar away from an EGOT. No pressure.

There's also her solo album "In Constant Search of the Right Kind of Attention" (aren't we all?) recorded live at 54 Below. There are jokes, jazz, and a ukelele. You can listen to some tracks from it below.

Here's hoping that Sadie Stone is here to stay on the Nashville stage. We know Benanti is sure to provide us with even more memorable music, laughs, and gif-able moments. Though seriously, what could ever beat this classic Baroness side eye? #TeamElsa