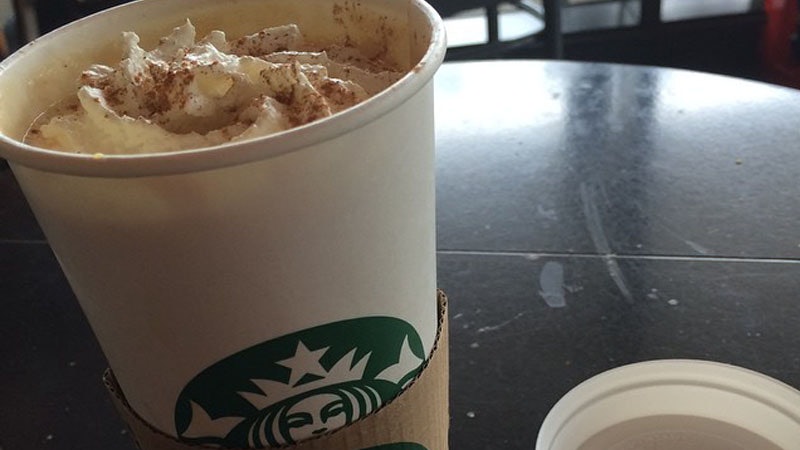 Pumpkin spice latte: innocuous, delicious autumnal treat? Or calorie-laden, chemical-filled menace to society? Though the drink was invented over a decade ago, this cup of sugar, whipped cream, and also maybe some coffee has only recently taken on a second life as a symbol of everything that's wrong with the average American coffee drinker.

Or should I say, everything that's wrong with a certain kind of average American coffee drinker. For, despite its popularity with everyone from moms to high schoolers, the pumpkin spice latte has become infamous as the fuel of choice for the basic bitch, a questionable cultural character reviled for her boring taste and predilection for yoga pants. To drink the hated PSL has come to symbolize more than just an aversion to grown-up coffee; it now stands for having an allergy to everything cool and interesting.

I know of what I speak: While I work in and live near Williamsburg, a painfully hip Brooklyn neighborhood with high-end artisanal coffee brewers on almost every corner, I am also a pumpkin spice latte addict.

Like every addict, I have a stable of convenient excuses — I just started drinking coffee last year! I'm not used to the taste! Where else am I going to get my daily serving of 50 grams of sugar? — but I know that they're all unconvincing. And so, I keep my habit to myself, sipping pour-over and cold brews like a respectable, culturally engaged adult, while suppressing the urge to ask my barista to dump a vat of flavored corn syrup into my cup.

Until today, that is. This morning, I set out into the artisanal coffee wilds of Williamsburg to find out what happens when basic bitch taste buds meet high-end coffee pretensions. What would happen if I blithely ordered a pumpkin spice latte at one of the area's hip coffee shops? This is a drink with 93,000 followers on Twitter, a drink that obsesses people to the point that they make them at home year-round. Could these coffee shops really successfully pretend that the pumpkin spice latte didn't exist?

And so, I prepared to take my secret life public. I hit up three independent Williamsburg coffee shops and asked for a pumpkin spice latte. May God have mercy on my soul.

This Swedish coffee shop has six locations in Brooklyn, all of which specialize in cold brews, specially roasted beans, and other kinds of swanky coffee.

Do you have pumpkin spice lattes?: "No."

What do you have instead?: "We have some pumpkin spice muffins..."

What drink do you have that's closest to a pumpkin spice latte?: "A chai latte, maybe?"

Did this barista think I was an idiot?: No, but he may have felt sorry for me and my awful taste.

Did I feel like an idiot?: Of course. This was a serious place for serious coffee! And here I was, rolling in and basically asking for a juice box. I became a little nervous as I looked around the shop. How would I live this down if any of my neighbors overheard me?!

Results: Suggesting a chai latte as a pumpkin spice latte replacement seemed to assume the best about me and my love of PSLs — that I was interested in the drinks for their actual spice flavoring, and might be interested in a classier version of the same spices. I am, of course, not actually classy (see: my interest in pumpkin spice lattes), but it felt nice to be given the benefit of the doubt for once. Also, the pumpkin spice muffin was the most delicious pumpkin-flavored food I've tasted all year, so the entire experience ended up in the plus column.

Despite being located on the ground floor of one of Williamburg's ultra-basic new waterfront condos (the very same condos that are home to disgraced former Georgian president Mikheil Saakashvili!), the coffee shop offers the usual artisanal coffee goods, like a proprietary bean blend.

Did they have pumpkin spice lattes?: Yes — though they weren't listed on the menu, perhaps because they are too embarrassed about it.

Did this barista think I was an idiot?: Who cares?! I'm getting my goddamned PSL!

Did I feel like an idiot?: For once, no. Because I felt vindicated! Vindicated, I tell you!

Results: This pumpkin spice latte was kind of nutty and subtle, and honestly pretty great. If they all tasted like this, maybe we PSL devotees could finally come out of the shadows, and live among the rest of you as equals.

This Australian coffee company is a magnet for coffee fanatics; after a few minutes on their website, I felt like I knew more about the way their coffee beans were raised than I knew about a lot of my own friends' childhoods.

Do you have pumpkin spice lattes?: No, but the barista assured me that "our regular lattes are better than all those lattes," in a voice that made me believe that she has to answer this kind of dumb-assed question all the time.

What do you have instead?: Regular latte.

Did this barista think I was an idiot?: I think she pitied me — she directed me to some simple syrup that I could use to make my latte sweeter.

Did I feel like an idiot?: Yes — and I was able to feel like an embarrassing, uncool fool while they were playing Sugar Ray on the stereo here, so, like, we are talking serious PSL shame.

Results: The barista was right — this was one effing delicious latte.

I had initially thought (OK, worried) that I might get some shade thrown at me for seeking something so objectionably tacky in the city's coolest coffee shops. But after my experiment was done, I realized that if the baristas felt anything for me, it was pity — pity for my assumed bad taste, naivete, and inability to appreciate the finer things in life. Pity for my total, utter, tragic basic-ness.

And it's true, you would have to be astronomically naive to run around thinking the world was your Starbucks. But while the worlds that produce classy artisanal coffee and pumpkin spice are for the most part hopelessly divided, more consumers jump back and forth between them than you'd think. You see us as you want to see us — in the simplest terms, in the most convenient definitions. But what we found out is that each one of us is a hipster... and a basic bitch... and a coffee snob... and a pumpkin spice latte guzzler. Does that answer your question? Sincerely yours, the High-End Coffee Club.

Now someone get me a drink with high fructose corn syrup in it before I lose my mind.

More like this
10 Pumpkin Recipes That Are Way More Creative Than Pie & Lattes
By Rebecca Deczynski and Alexis Morillo
The Spiritual Meaning Of Angel Number 000, Explained
By Kristine Fellizar
TikTok's Butter Board Might Be The New Cheese Plate
By Emma Carey
Deliveroo Is Selling Lotus Biscoff Cinnabons Now
By Darshita Goyal
Get Even More From Bustle — Sign Up For The Newsletter