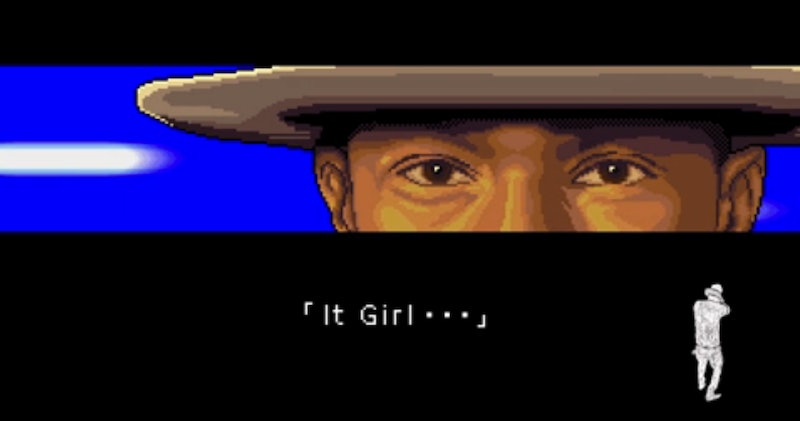 Tuesday, the music video for Pharrell Williams' "It Girl" dropped. The Takashi Murakami-produced, Mr. and Fantasista Utamaro-directed vid is a sparkly, colorful, and trippy viewing experience. The surreal video complements the final track off of G I R L's dream-funk vibe: It boasts an anime-meets-video game aesthetic, and yeah, ish gets weird. I would sum it up as follows: an anthropomorphized crab carries a glitter cannon in one hand and a laser gun in the other. (No, that doesn't happen in the music video, but I wouldn't be surprised for a second if it did.)

The first time I watched the animated video, I, like a fish to a lure, was entranced by the colors and glitter, so I totally missed one particularly noteworthy detail: It Girl/Avatar Pharrell's crush sports bunny rabbit accessories and appears to be no older than 15. [Sigh.] I mean, she could be an adult woman who's aged well and has an appreciation for kawaii. That happens. Or maybe Pharrell's avatar is supposed to be as young as the ladies kicking it on the beach. ...Or maybe they're teens and he's an adult and all of it is as yikes-worthy as I initially thought. *Headdesk*

Even if the cartoons are supposed to be peers, fully-clothed Avatar Pharrell spies on the half-naked group more than once. Which is... [Sigh.] I like a majority of the video, and I realize it's just a cartoon, but I can't ignore the animated skeevy-ness, man!

Here are some of the moments that have me feeling all of the cartoon cognitive dissonance:

Avatar Pharrell’s enormous hat does not weigh him down:

I feel weird about this:

Oh. She violently chops a watermelon in half. While wearing a blindfold. Explanation T.B.A.:

Also? I don't know why It Girl is being spoon fed:

What’s happening. Why does everyone look so sad. Should I be worried:

It Girl is very strong. Hi, apparition of Pharrell:

AHHHHHHHHHHH TO ALL OF THIS. ESPECIALLY THOSE BINOCULARS:

Avatar Pharrell buys some clothes and accessories for It Girl. Uh, K?

Oh, you know. Just a silhouette of Pharrell dancing in front of some Bratz dolls:

...And A bunny appears in the sky and emits glitter from its eyes:

...And the entire world turns into glitter:

Wait, is that the same giant whale from before? Can it change size at the drop of a magic hat?

Avatar Pharrell’s bow tie spins and glitter shoots out of his finger:

Why is the roof of the Spraaang breaaaak foreverrrr hut opening up?

A Dolphin Spaceship that blasts stuff:

A Dolphin Spaceship that summons a giant rabbit gun and shoots all of the lasers:

“It Girl” takes a stroll along the beach while Avatar Pharrell dances on a truck:

It Girl takes a stroll along the beach while one man walks a dog, another man hides behind a palm tree, and two of her friends fly around in the dolphin spaceship:

These stills are but a small sample of the bizarre music video: