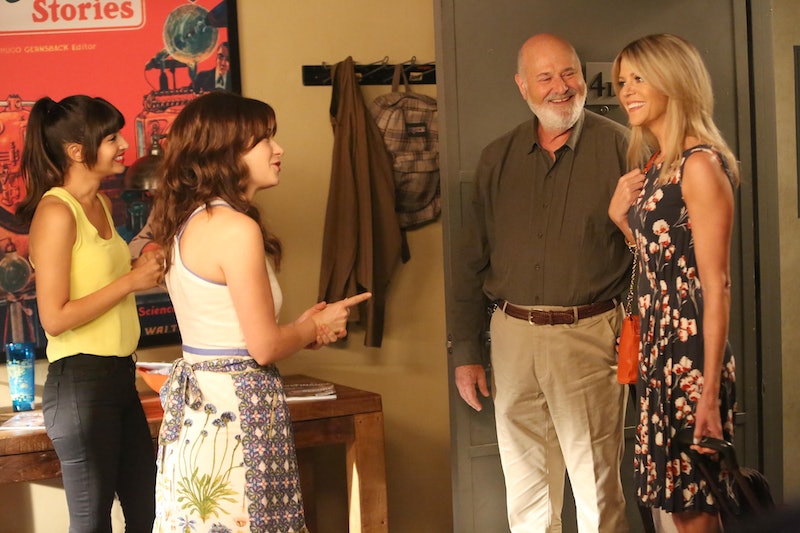 There’s only one thing more depressing than watching your parents split up, and that’s noticing that their dating life is way better than yours. Which is what Tuesday night’s New Girl episode “Julie Berkman’s Older Sister” dove right into when Jess’ dad (Rob Reiner) pays a visit to the loft and introduces Jess to his new — and very young — girlfriend, Ashley (played by It's Always Sunny in Philadelphia 's Kaitlin Olson). So young, in fact, that she actually turns out to be an old high school rival of Jess and Cece’s. It can’t get much worse than that, right? It can if you find out that very same person also suffers from a sex addiction, officially taking the awkwardness of parental dating to a whole different level.

It’d be a tough situation for any child to cope with, and while Jess tries her best to put on a happy front, you can tell it really bothers her — though it may not be for the reason that you think. Or, at least, not just that reason. The age difference is sure to strike an uncomfortable chord, sure — I mean, just picture if your dad started dating one of your high school classmates. (Ick, bad idea. Forget I said that.) However, I think it’s doubly hard for Jess to see her father so happy with someone, when she herself is having such terrible luck in the dating department.

The first two episodes of Season 4 focused mainly on Jess attempting to “get back out there” in the dating world — an attempt that’s proved to be pretty disastrous thus far. Even Nick got a little action this week with a girl he met in Schmidt's focus group. (Sorry 'shippers, but the Nick-Jess train isn't leaving the station again anytime soon, it seems.) So it makes sense that when her dad starts talking about wedding belles, Jess starts to unravel. She completely sabotages his relationship with Ashley (aka "Trashley"), accuses her of cheating, and even threatens to introduce her to "Crab Tree and Evelyn," which are apparently the names Jess has given her fists. LOL.

But in the end, awkward, uh, I mean true love wins out. Jess gives their romance her blessing and even helps her dad propose. Looks like Jess is about to have a new stepmother. And since Olson's character is a recurring role, I'm sure it won't be long until we see her once again. Maybe even at the wedding? As Jess puts it, it'll be "like going to prom with all my dad's friends." Ah yes, the real American dream.