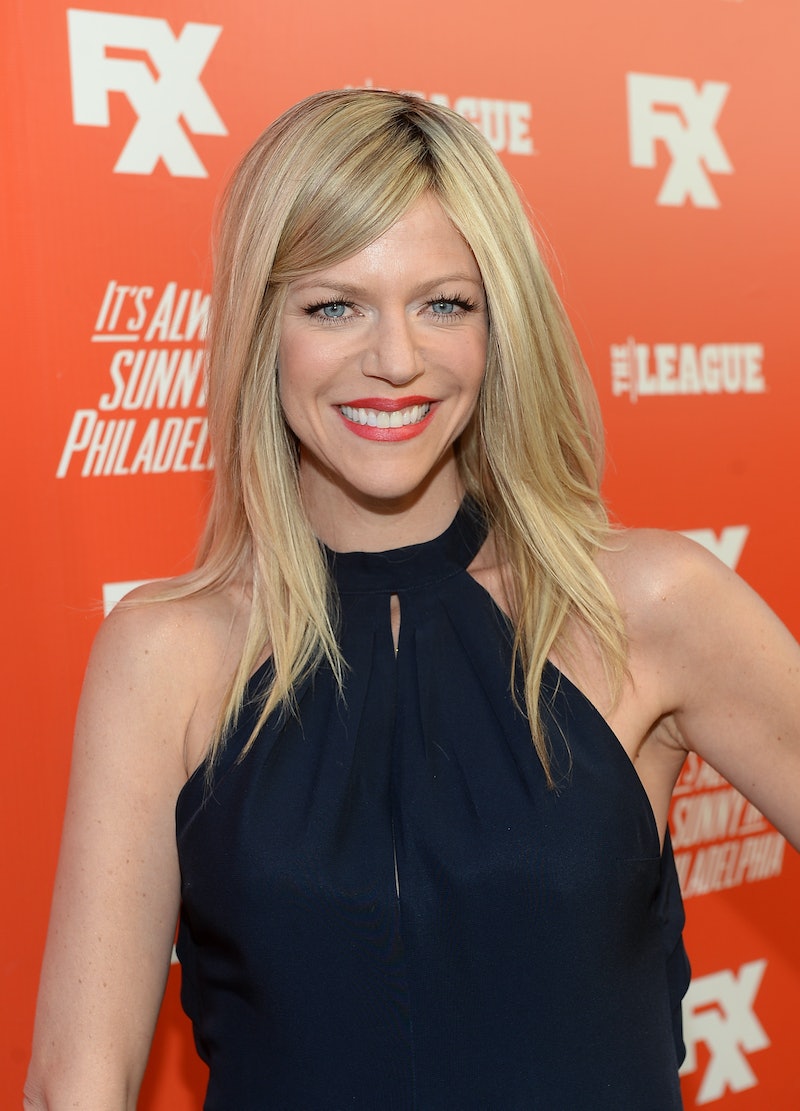 There is hard evidence that the TV gods love us and want us to be happy. It's Always Sunny in Philadelphia's Kaitlin Olson is guest starring on New Girl on Tuesday, Sept. 30. And Sweet Dee isn't going to just do a cute cameo and then fade into the background. No. She has a recurring role on the series as the girlfriend of Jess's dad (Rob Reiner), who also happens to have have gone to high school with Jess and Cece, according to Entertainment Weekly. Oh yes. Since we've already seen Olson's It's Always Sunny costars Rob McElhenney (who's also her husband) and Glenn Howerton on The Mindy Project, this is the third time that we are being blessed with the gang coming onto Fox this year. And it's awesome.

Olson knows how lucky she is to be on It's Always Sunny, as she told Metro , "I love TV. But I think it would have to be a really amazing project, for me to go from this, where I have hit the jackpot and I love my character and I love the creative participation I get to have. It would have to be pretty special." But besides the cult FXX show and New Girl, Olson has been around the entertainment industry — so what else has the glorious hot mess that is Deandra Reynolds done?

She's Been on TV (and Not Just as Sweet Dee)

Olson was a reoccurring character on Curb Your Enthusiasm as Becky, who lost her beloved aunt, before being on It's Always Sunny. It makes complete sense that she was on Curb as the absurdity seems like a perfect fit for Olson and it got her prepared for being surrounded by completely obnoxious (and hilarious) characters.

She also was in the final two seasons of The Drew Carey Show as Traylor (whatta name) — Drew's boss' girlfriend. And she was in five episodes of The Riches, another FX show starring Eddie Izzard and Minnie Driver.

She Was in a Rom-com

Like her (fictional) brother before her, Olson had a role in a romantic comedy. (Howerton, who plays her brother Dennis on It's Always Sunny, had a bit part in the Diane Lane and John Cusack-starring Must Love Dogs.) In Leap Year, Olson played the lead's obligatory female friend Libby. As the movie primarily took place in Ireland, she only had a few scenes stateside.

Charlie Day is the only member of the It's Always Sunny cast to have been a lead star in a popular and major motion picture with Horrible Bosses (not counting Danny DeVito, of course), but Olson has had other small roles in the movies Coyote Ugly, Weather Girl, and The Heat. I'm not too surprised the gang hasn't been in more movies since their particular brand of humor probably makes the Hollywood powers that be a little scared, but I'd love to see more of them on the big screen.

She Provides Voices for Animated Characters

Along with providing the voice of an alcoholic park ranger on Comedy Central's Brickleberry, she was the voice of Brenda Quagmire on Family Guy for a couple of episodes. She also was a regular voice on FX's Unsupervised, which only lasted a season. But the show is worth checking out since it was created by David Hornsby and he's a familiar face for It's Always Sunny fans. He plays Rickety Cricket, who had a sweet spot for Dee despite the gang enjoying completely ruining his life.

She Has an Awesome Family

As previously mentioned, Olson is married to her costar McElhenney who she met on It's Always Sunny. McElhenney, Howerton, and Day developed the part of Sweet Dee more after Olson had a great audition, since her character wasn't written to be as outrageous or funny as the guys. McElhenney told the A.V. Club, "That was just our own ignorance when we first got started, and also because we knew each other, and we didn’t know Kaitlin, and we didn’t know how to write to her strength."

Soon, the pair began secretly dating in 2006 as Olson told InStyle , "We were very sneaky at first because we thought, 'This is a really bad idea.' But then I fell in love with him." Their wedding in 2008 was so classy looking, and so un-Sunny of them — which makes me remember that these people are real outside of their characters (which is probably for the best since Dee and Mac would be terrible people). The couple has two sons, Axel Lee (born in 2010) and Leo Grey (born in 2012). And just to cement how much I love the woman that is Kaitlin Olson, she went into labor with Axel at a Phillies game. For you non-Phillies fans, you can increase your love of her by checking out how hilarious she is on Twitter.

I'm hoping Olson brings the ridiculousness that she excels at to her character Ashley on New Girl. It will fill the Sunny void until it returns in January 2015. And with promo photos like this, I couldn't be anymore excited.

More like this
Netflix Reveals First Look At Wednesday In The 'Addams Family' Spinoff Series
By Bustle Editors
Kenan & Kel Just Reunited At The 2022 Emmys & Twitter Is Overjoyed
By Grace Wehniainen
A TikToker Just Proved Gossip Girl's Identity Was Revealed In Episode 1
By Jake Viswanath and Meguire Hennes
15 Offensive AF Jokes In 'Friends' That Really Aren't OK
By Tolly Wright, Bustle Editors and Meguire Hennes
Get Even More From Bustle — Sign Up For The Newsletter