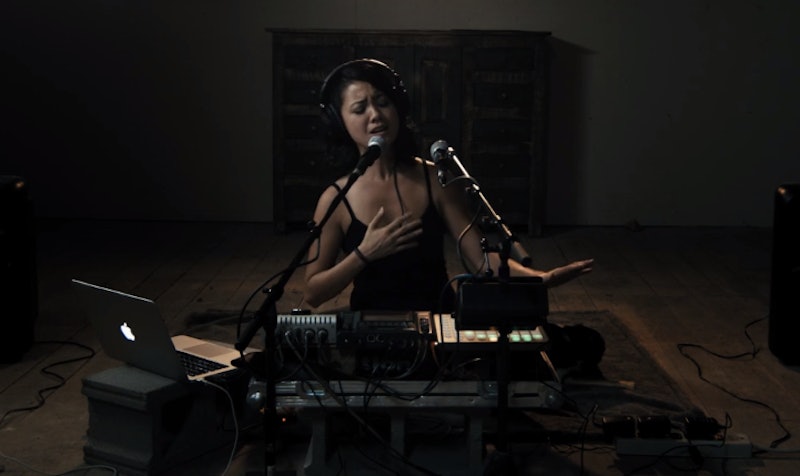 Indie music maker and one-woman band, Kawehi, has given fans a very special present: a perfect cover of Sia's "Chandelier". The video is part of Kawehi's Kickstarter bid to fund her forthcoming EP, Evolution. The track was chosen by her fans, one of the incentives the vocally blessed songstress offers to those contributing to her Kickstarter effort, which has already received over $30,000 worth of pledges, more than 10 times her initial goal of $3,000. And we're not mad: Kawehi is a hard working, fan adoring, independent artist who deserves to have her creative projects realized, in a world where too often big budget names often bogart attention (we're looking at you, Zach Braff).

Sia isn't the easiest vocalist to cover. Her high-pitched, elongated notes aren't for any old amateur, but Kawehi reaches each one to goose bump inducing perfection. All while making the music playing under her voice and chilling with her dog. That's some talent right there, and judging from her ever growing fan base of generous supporters, we're guessing (and hoping!) Kawehi is on her way to big things. (We've actually been obsessed with her for a while and recommend watching every single video she has. You could easily waste a whole morning lost in her powerful dreaminess.)

Her Evolution EP is a follow up to her first project (also crowd funded) Robot Heart, and she describes it as "The journey of a girl who used to be a BOT." While we wait with baited breath to hear what wonders Kawehi will release upon the world, we're going to be playing her "Chandelier" cover on repeat. Watch below!