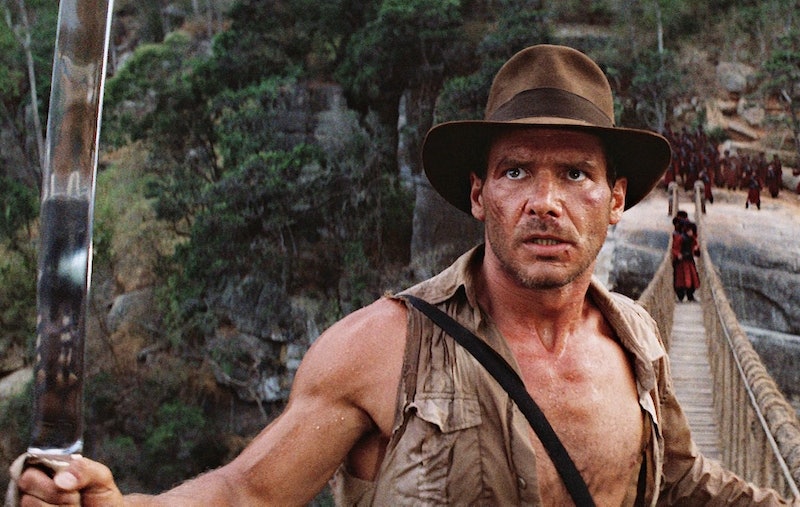 At first glance a "let her go" supercut sounds like some sort of Frozen mashup, but that couldn't be further from the truth. In actuality, it's a four-minute video of male heroes saving damsels in distress by uttering those three magic words: "Let her go." You know, because the woman can't possibly escape on her own unless the man comes along with his signature manly phrase. Bonus points if it's followed up by, "You can have me instead!" Ultimate manly sacrifice! If I sound bitter it's because I am. You try watching over four minutes of clichéd men saving supposedly helpless women and you will be, too.

I've always had issue with the damsel in distress trope in movies, but seeing it all together like that in one video is disheartening. Especially when you look at the movies they've included and realize that things haven't really gotten any better. The Huffington Post edited the film and it includes 97 clips from movies stretching back to 1966. But in the decades to come, Hollywood hasn't gotten much better. In fact, the video references 44 movies just from 2000 and on that use the "let her go" phrase. Frankly, it's infuriating but it also needs to be seen:

See? Not only are script writers lazy when it comes to how to rescue a woman, but things aren't getting more progressive as time goes on. Just looking at the next six months of movies to come and I can already spot eight films where "let her go" is likely to be used.

A standard disaster film premise forces Nicolas Cage to fight to save the lives of the people around him. Since his character's daughter is involved and Cage is already prone to freak outs in movies I'd bet we'll see him shouting "Let her goooooo" in his ragetastic voice. He's done it before in Drive Angry, so he'll probably do it again, and it will likely be in this movie.

Jeremy Renner goes on a journey to uncover the truth behind the CIA's ties to drug smugglers. But his efforts attract "the kind of attention that threatens not just his career, but his family and his life." I'm going to guess that an angry Renner faced with a kidnapped wife or child would not be immune to saying that clichéd rescue line.

Keanu Reeves is on a mission to "hunt down the gangsters who destroyed everything he held dear." If a lady or two gets held up by said gangsters, John Wick will probably come to their rescue. Just look at his face in the poster. That is the picture definition of a man who uses the "let her go" phrase.

Jake Gyllenhaal plays a journalist who "blurs the line between observer and participant to become the star of his own story." Want to guess how it is he becomes said star? I'm going to wager it has something to do with saving local TV news reporter Nina.

A girl and her boyfriend stumble upon an angry group of aliens in the woods. I dare say if any of the aliens attempt to take April (they will, it's a horror movie; someone always gets taken in a horror movie), her boyfriend will likely jump into action. He might even shout at the aliens (in hopes that they speak English) "let her go!" Will the aliens listen? Find out in November!

Josh Hutcherson's character falls in love with the niece of a famed drug lord. Imma guess that he has to save her at some point. In the trailer he shouts, "I will kill you!" while crying, so I think it's safe to assume that the full line is probably something like, "Let her go, or I will kill you!" It's not J. Hutch's fault he could be dealt an unfeminist line, but it's a shame.

Considering Taken 2 is already on the list of films that used this phrase, it's likely to happen again in Taken 3. Especially when you consider that in the plot, Liam Neeson's only goal is to keep his daughter safe. Were she to be, um, taken, he'd probably bust out that trusty old "let her go" line.

Disney princess stories have a lot of capacity for damsel in distress situations, and it just so happens that Cinderella is one of those. Can I imagine the prince telling the evil stepmother to let Cinderella go? Yes, yes I can imagine that.

It's such a shame that we've come so far, yet Hollywood hasn't gotten the message. They're still representing women as needing to be rescued by a man—and showing no signs of stopping. Hopefully these films I mentioned above won't fall under the "let her go" trap. I'd like nothing more than to be proven wrong.

More like this
The 'Hocus Pocus' Sequel Finally Has A Release Date & It Makes Total Sense
By Shannon Barbour and Radhika Menon
You Might Want To Rewatch 'Elvis' For This Britney Spears Easter Egg
By Grace Wehniainen
Everything You Need To Know About The 'Knives Out' Sequel
By Grace Wehniainen
Is Austin Butler Really Singing in 'Elvis'?
By Arya Roshanian
Get Even More From Bustle — Sign Up For The Newsletter