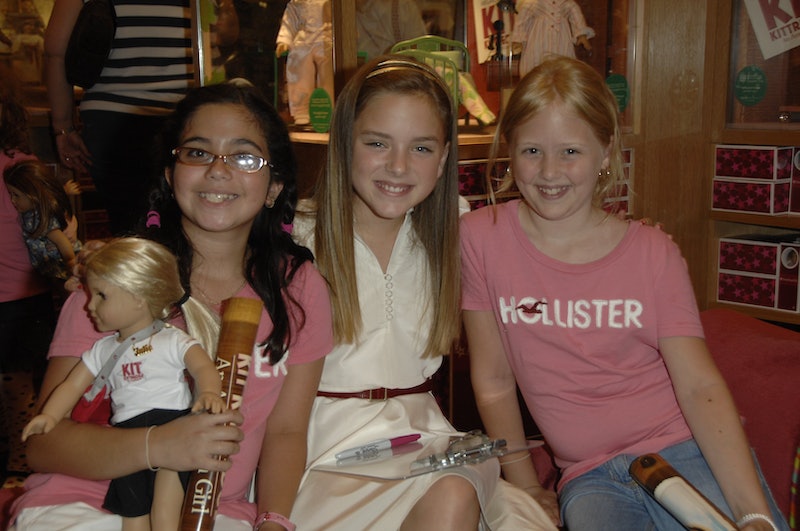 At the risk of sounding like an old fogey (I'm 29), back in my day, we didn’t have this newfangled thing called the Internet — well, we did, but it was rare that one ventured outside the confines of AOL.com. If we wanted to take personality quizzes, or read about our favorite celebrities, or play word searches, we had to wait each month for our favorite magazines to arrive. Whether you picked ‘em up at the newsstand, got ‘em from the library, or waited impatiently for them to appear in your mailbox every month, print mags were one of the great joys of… well, pretty much every decade prior to the Internet’s rise to prominence.

There are many who believe that the ‘90s in particular were the golden age of kids’ and teen magazines — and to be honest, it’s kind of hard to argue with them. Granted, I’m rather biased, given that I myself am a child of the ‘80s and ‘90s… but we really did have a terrific number of fabulous publications at our fingertips. This Throwback Thursday, let’s re-discover the magazines that we pored over so feverishly in the days of our youths. From Disney Adventures to Tiger Beat and from American Girl to Nintendo Power, these newsstand reads were the best, weren’t they?

Zillions is unique for being one of the only useful periodicals on this list. First launched by Consumer Reports under the name Penny Power in 1980, it was rebranded sometime in the ‘90s and gave kids financial advice. The idea was to teach kids about budgeting in terms they could understand — their allowance, saving it up for big ticket items, etc. — and to promote smart consumerism in the youth of America. Sadly, it folded in 2000; such is the nature of the print mag. If you miss it, though, you can get all nostalgic with a terrific history of Zillions written by Christine Driscoll for The Billfold back in 2013 — it’s far more exhaustive than anything I could write in a paragraph, so I’ll point the curious over there.

The kind of kid who read Zillions probably possesses excellent money management skills as an adult and is almost certainly on the fast track to financial independence.

Given that I am an unabashed Disney lover, it should come as no surprise that Disney Adventures was one of my favorite magazines growing up. What’s not to love? It went behind the scenes both with regards to Disney movies and to the parks; it had neat articles about everything from science to travel; its comics featured classic ‘90s afterschool TV show characters (Duck Tales! Woo-oo!); and much, much more. It ran for 17 years starting in 1990, finally ceasing publication in 2007. Impressively, you can still get back issues of Disney Adventures from Amazon. Anyone else still remember the issue circa The Lion King with Jonathan Taylor Thomas on the cover?

Fun fact: The initial 1990 run of Nickelodeon Magazine consisted of only two issues, and it was distributed exclusively at Pizza Hut. It returned first as a quarterly, then a bi-monthly publication in 1993; whether it was a reaction to the popularity of Disney Adventures remains to be seen, but it was just as fun as its competitor, and way more off the wall. If you haven’t read Slimed!: An Oral History of Nickelodeon, by the way, it’s definitely worth it — it overs the era most of us ‘80s and ‘90s kids look back on with such fondness, which was also when Nick Mag was produced. All good things must come to an end, though, and this one was no exception: Nickelodeon Magazine put out its last slime-tastic issue in 2010. Grab old issues on Amazon if you like!

Weirdly enough, I read most of the magazines on this list by picking them up at my local CVS—except for American Girl. I subscribed to that one from the first issue — January 1993 — and for years afterwards. Like the dolls for which Pleasant Company was known for, what I liked so much about the magazine was the fact that each issue was about possibility. From short stories to craft ideas and from girls going off on adventures (remember the Take Our Daughters to Work article that featured a girl hitting the road for a month with her long-haul trucker dad?) to girls having adventures right in their own backyards, it opened up whole worlds to me outside my realm of experience. And for that? I adored it. I have no idea what it’s like these days, but I appreciate the fact that it’s still in circulation. I hope it hasn’t lost any of its shine.

Nintendo Power lead a surprisingly long life — first published in 1988, it went out of print two years ago in 2012. Like many branded magazines, it served as an extremely in-depth advertisement for Nintendo products; however, for kids who lived and breathed Nintendo, it held all the stuff we wanted to know about all our favorite games within its pages: Strategy guides, reviews, sneak peeks at what new games were on the horizon, and more. These days, most of us flock to the Internet for our gaming news and walkthroughs, but back in the day, nothing beat Nintendo Power when it came to scratching a Legend of Zelda or Super Mario itch.

6. Seventeen, YM, Teen, and All the Rest

Seventeen, Teen, and all the other magazines that came from that same mold pretty much served one purpose: To prep girls for Cosmopolitan, Elle, and all the other “lady mags” that served the older demographic. I was always more of a YM girl myself, but I read pretty much whatever I could get my hands on — even though I’ve never purchased Cosmo or Vogue or any of the other magazines all those teen mags were supposed to prime me for. Most of the teen publications have pretty long and storied histories, though: Seventeen began publication in 1944; YM, which stood for “Young Miss,” “Young and Modern,” and “Your Magazine” at various points in time, kicked up in 1932; Teen put out its first issue in 1954; and so on. Most of them have become online-only publications now, although Seventeen still puts out a print issue every month.

The Seventeen-type mags were notable for their mix of content covering everything from beauty, fashion and celebrities to love and life — but if you were truly celebrity obsessed, you went for Tiger Beat and its cousins. Known for their “Put ALL the things on each page!” aesthetic and the fold-out images of pop stars and movie idols intended to be pinned to the insides of school lockers, these mags weren’t the highest-class publications out there… but gosh, were they fun. They’re the beach read of the magazine world. As is the case with a lot of print mags, most of them have folded now; Tiger Beat is still around, though, so I guess some things never change.

Confession: I didn’t read Sassy. I was only nine years old when it ceased publication in 1994, so alas, I missed the golden age of Jane Pratt’s years as a magazine editor. Founded in 1988 by Australian feminist Sandra Yates, it offered an edgy alternative to other publications geared towards teenage girls — ones who dug The Ramones and wanted to know how to deal when school bites. But fear not, Sassy lovers! You can relive your glory days thanks to the Tumblr Sassy Scans. http://sassyscans.tumblr.com/ Enjoy!

I don’t know anyone for whom Highlights was an actual highlight of the magazine world; mostly I remember it being that thing we read in the waiting room at the doctor’s office in an attempt to stave off the boredom. Somewhat astonishingly, it’s been in print continuously since 1946, with many of the same features, like Goofus and Gallant, remaining a part of each 42-page issue. Speaking of good ol’ Goofus and Gallant, Mallory Ortberg over at The Toast recently penned a phenomenal twist on characters — head on over there to check it out. I highly recommend it.

Most girls pledged their pre-teen loyalty either to American Girl or to Girl’s Life, which debuted in 1994; since I was an American Girl reader, I don’t think I ever actually picked up an issue of Girl’s Life. I had friends who loved it, though; I think the draw was its mix of celebrity content and the kind of literary magazine/life advice stuff that American Girl focused on. It looks like it’s rebranded itself in recent years to compete more with teen mags like Seventeen, but it still covers some of the heavier topics, too.

MAD Magazine was more my older brother’s territory than mine; when he discovered it in the early ‘90s, I was young enough that most of the jokes went right over my head (although I loved playing the MAD board game with my family anyway). I’ve come to appreciate it in my older years, however — its off-the-wall, yet pointed humor is often just what we need to combat the climate of the world. Also, I love that it’s still in print; it’s been around since 1952 (that's the first cover there), and that’s no small feat. P.S. Scotty McCreery is definitely Alfred E. Newman in disguise.

Cracked wasn’t always the online repository of wonderfully weird trivia it is today; once upon a time, it was one of MAD Magazine’s biggest competitors. First published in 1958, it even had a mascot to rival Alfred E. Newman: A goofy blond-haired dude called Sylvester P. Smythe (we later found out that the “P” stood for “Phooey”). In 2006, though, it rebranded, taking a format that was less humorous and more like GQ, and, well… let’s just say it didn’t work so well. The website, though, is alive and well and way more interesting, so at least there’s that.

You guys. Ranger Rick is still around. That makes me so happy I can't even tell you. Originally published in 1967, it's been bringing the joys of the animal kingdom to kids for almost 50 years. I also just learned something about it I didn't know: It uses environmentally friendly processed paper and most of the ink is comprised of vegetable oil. As a result, 1,179 trees, 617,398 pounds of carbon, 1,517,064 gallons of water, and 216,093 pounds of solid waste are saved each month as a result. You go, Ranger Rick!