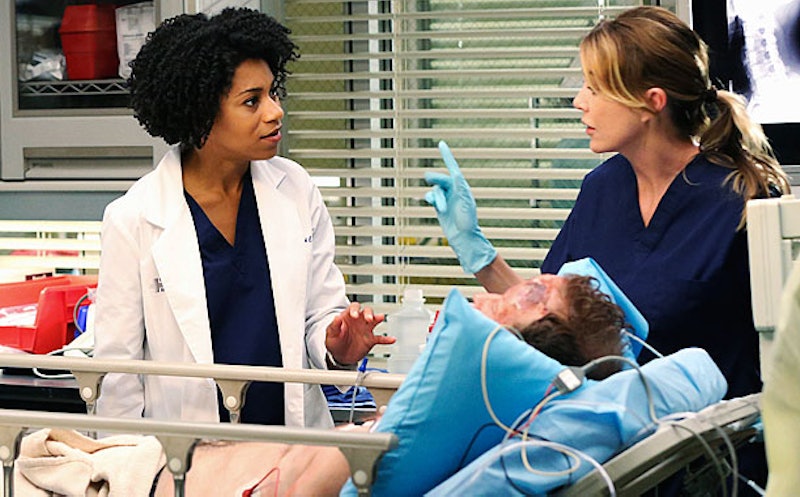 Let's start with the good news: Grey's Anatomy is back for Season 11. The bad news: I'm not sure about the direction it's going in. Obviously, the big kicker this season is that Meredith has a new sister, Maggie, who she was (as far as we know) unaware of, and it definitely looks like Richard is the father. Aside from this being slightly hard to believe (although at Grey Sloan Memorial Hospital, anything goes), it's also giving me flashbacks to the last time Meredith found out that she had a long lost sister.

When Mark Sloan and Lexie Grey took their last breaths after the plane crash that would eventually claim their lives in Season 8, I was heartbroken — and the grieving process still hasn't ended nearly three years later. Lexie was hands down my favorite Grey's character, and part of the reason for that was the fact that she was the family Meredith didn't know she needed, whether her big sister was willing to accept that they were related or not. Despite her flawless surgical skills, Lexie was immensely human and relatable, and her optimism balanced dark and gloomy Meredith out so well.

But Lexie's no longer with us (sob) and Maggie appears to be here to stay — as long as an unforeseen Shonda Rhimes tragedy doesn't kill her first. And since they're both sisters to our Meredith, it's hard not to compare the two.

They both got off to a rocky start with Meredith

When Lexie arrived on the scene as an intern, Cristina assigned her a number and that was that. Meredith simply wasn't interested in letting someone in to her life and her heart, and why should she? Every time she had at that point, she'd been let down. With Maggie, we're not sure how Meredith will receive her — she's not exactly aware that they're related just yet. But they're already competitors, and the bad blood between them might come to a boiling point when Mer finds out they share DNA.

They're both medical geniuses

Who can forget Lexipedia's impeccable photographic memory? She was incredibly talented, and so far, Maggie seems to be the same way. I'd say a talent for medicine is definitely in their shared genes.

If Meredith decides to forgo a relationship with her new sister, I don't think Maggie will chase her down until she changes her mind like Lexie did. One of the best things about Lexie was the fact that, regardless of the way Meredith might have seen her, she was going to love her. As much as it pissed Meredith off in the beginning, she didn't give up. And in the end, they turned out to be exactly what each other needed.

When it comes to Maggie, though? I have the feeling that she's a bit less likely to hand out second chances. If Meredith turns her away, Maggie might just let it go... and I wouldn't be surprised if we see Meredith become the one who has to chase someone down this time around.

More like this
We Finally Know When 'Grey’s Anatomy' Is Coming Back
By Brad Witter
Sandra Oh Says Early ‘Grey’s Anatomy’ Fame Caused Her To Get “Very Sick”
By Brad Witter
Everything We Know About When To Expect Money Heist: Korea Part 2
By Kadin Burnett
The Umbrella Academy Cast Breaks Down That Wild Season 3 Finale
By Gretchen Smail
Get Even More From Bustle — Sign Up For The Newsletter