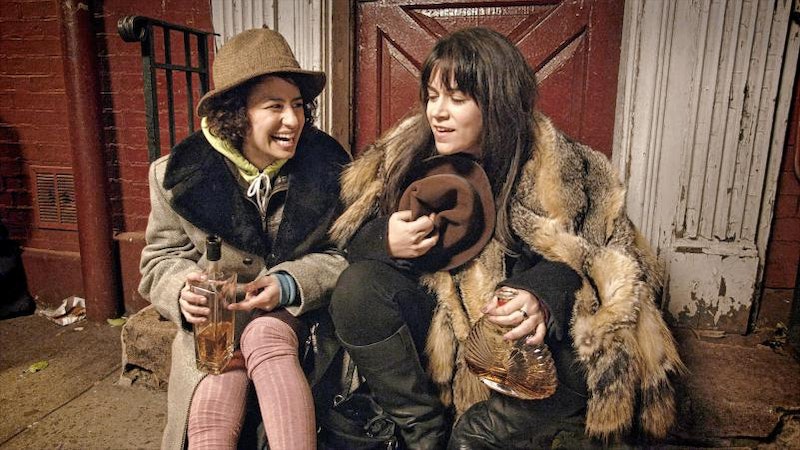 There are some feelings that all New York women understand. Mono-feminism is something we’re working hard to eradicate — every woman has a unique experience that’s shaped by a number of different social factors. New York, being the wildly, inappropriately unpredictable, crazy city that is it, however, brings women together in a female solidarity is unique and hard to find elsewhere in the world. I’m not saying we all need to learn the choreography to “Run The World” and dance it together under the Brooklyn Bridge at full moon while wearing only body paint and feathers in our hair (even though that sounds amazing), but New York women certainly understand certain feelings that go hand in hand with being a New York woman.

We exchange knowing glances on the subway when trying to apply the perfect cat eye make up as the train shifts abruptly in the tunnel, leaving us looking more like NFL players than the ‘50s vixen we were going for. We nod sympathetically at one another when our un-waxed, g-string clad pink bits are exposed in the least glamorous Marilyn Monroe moments caused by the wind tunnels on Manhattan’s avenues. We concentrate all our psychic energy on making a man’s head explode when we notice him sexually harassing another woman on the street. And in these moments, a lifetime of understanding, empathy, and knowing passes between us, because these New York feelings are our common ground, no matter how different our private lives might be.

There is not one woman in all of New York who is happy about Carrie Bradshaw. Ten years after the end of Sex and the City , the woman still haunts us. Non-New Yorkers gush things like “Oh your life must be EXACTLY like Carrie’s!” and if you listen very closely you can literally hear the sound of a thousand women’s’ faces agonizingly melting off. We hate Carrie Bradshaw. She’s a terrible, irresponsible, selfish character. The vast majority of us spend our hard earned money on things like rent and $3 Trader Joe’s wine. Our lives are not like hers. And we’re furious that people equate the Carrie Bradshaw archetype with the average New York woman.

2. How Cathartic (and Surprisingly Not Embarrassing) It Is To Cry in the Street

They say you’re not a true New Yorker until you’ve cried in the street, and I’m not talking about a delicate tear rolling wistfully down your cheek — I’m talking about a full emotional and physical breakdown, right there in the middle of Broadway. The first time I broke down on the streets of New York I was tired, poor and sick, and mostly just fed up. A woman walked past me and said in passing “Honey, he’s not worth it.” Once I was done crying and snotting into my sweater, I felt like I just walked out of the most cleansing yoga class of all time. It might sound nuts, but women in New York get it — public crying is sometimes what you need for a private release.

3. Irrational Jealousy of Other Women

Jealousy is bad. But New York women often feel its pangs completely irrationally. My irrational jealousy is for the “Soho Girl”. She’s the girl who wears un-hemmed t-shirts and cut off shorts in the summer and doesn’t sweat, and skinny jeans and heels with her coat floating open, YES OPEN, when it’s snowing. She always has an Alexander Wang bag hanging from the crook of her elbow. She’s probably perfectly nice, we’d probably be best friends if we met, but I hate that she’s impervious to the elements and that she always looks so put together when my sweat mustache grows faster than I can wipe it off. I think, when it comes down to it, our jealousy is for the women who make getting around in New York look easy and elegant. I wonder who my Soho Girl is jealous of?

4. How Vulnerable Being Cat Called Makes You

Let me preface this by saying that sexual harassment is a problem in many cities, and I don’t mean to say that it’s a uniquely New York epidemic. But there must be some blessed places out there where catcalling isn't a problem, because every New York woman has at least one friend who visits from out of town who actually enjoys being catcalled here. Apparently, there are non-New York women who feel empowered by having a man scream about anal raping her when she’s just trying to by some tampons at Walgreens. New York women understand the feeling of intense vulnerability that comes with receiving unsolicited sexual comments on a daily basis.

5. An Intense Desire For Solitude

This goes hand in hand with the above. I’ve never met a New York woman that didn’t crave some sort of invisibility. Just to sit alone at a bar with a glass of wine without being spoken to, and without the expectation that upon being spoken to, she’ll be sweet and engaging. New York women don’t always want to chat — and it’s because we’re constantly being forced into conversations we don’t want to have. It’s probably why people think New Yorkers (not just women, but in general) are rude. But after the 30th person of the day has tried to engage us at length, I think we reserve the right to be as anti-social as we so desire.