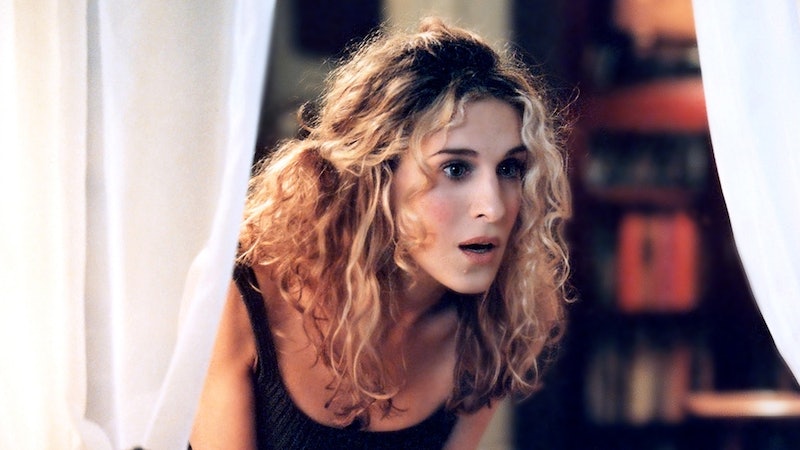 If you’re like me, you’ve long suffered from many a delusion of what it’s like to be a single woman in New York City thanks to a little show called Sex and the City. Heard of it? Why, of course you have!

Creator Michael Patrick King took the island of Manhattan and painted a perfect picture of this wondrous and magical place where dating and life wasn’t just fun, but relatively easy, too. Sure, there were those ups and downs, sticky situations where you wake up after a one-night stand and realize you’ve fucked a dude who has furnished his entire apartment horribly, but overall, between the endless array of guys streaming in and out of the lives of the four female characters, dating looked like a piece of cake. And based on Carrie's apartment and closet, making it in the city as a writer wasn't exactly difficult either.

However, as we all sometimes forget, TV and reality aren’t friends — and this show especially was a box of lies. Yes, the realization is harsh, but I've found that the sooner you give up those expectations for life in New York City, the happier you’ll be. Yes, ladies of the greatest city in the world, Sex and the City has destroyed your scope of reality, but I'm here to fix that. I learned the hard way: Here are 30 expectations Sex and the City gave us of what it's like to be a single lady living in NYC — and their actual realities.

'Satc': you go out with your girlfriends and have to tell men it's 'just a girls night'

Reality: you go out with girlfriends and spend the whole time talking about how no men hit on you

'SATC': YOU STUMBLE AND FALL IN FRONT OF A CAB AND MARRY THE MAN WHO SAVES YOU

REALITY: YOU STUMBLE AND FALL IN FRONT OF A CAB AND a GUY STEPS OVER YOU TO steal THE CAB

'SATC': THE NEW YANKEE IS REALLY INTO YOU, BECAUSE OF COURSE

REALITY: a drunk yankee fan is really into staring at your boobs

REALITY: YOU’RE DUMPED with a :( emoticon AND WISH he'd taken the time to write a real note NOTE

'SATC': YOU GO HOME WITH A CALVIN KLEIN MODEL AFTER A FASHION SHOW

REALITY: YOU own a calvin klein bra you bought at nordstrom rack

'SATC': AFTER A ONE-NIGHT STAND, THE CUTE BARTENDER WANTS TO BE YOUR BOYFRIEND

REALITY: AFTER A ONE-NIGHT STAND WITH THE CUTE BARTENDER, YOU CAN NEVER GO TO THAT BAR AGAIN

'SATC': YOU DATE A POLITICIAN WHO LOOKS LIKE ROGER STERLING AND HE WANTS YOU TO PEE ON HIM

REALITY: YOU DATE A POLITICIAN WHO LOOKS LIKE NEWT GINGRICH AND HE WANTS TO POOP ON YOU

'SATC': YOU DATE a perfect, handsome FURNITURE MAKER who proposes

REALITY: YOU save money for three years just to buy yourself the leather chair you eat cheese alone on

'SATC': YOUR EX LEAVES HIS 27-YEAR-OLD model WIFE FOR YOU

REALITY: your boyfriend cheats on you with a model

'SATC': YOUR MAID REPLACES YOUR VIBRATORS WITH THE VIRGIN MARY

'SATC': YOU TAKE THE VIRGINITY OF A HOT YOUNGER MAN WHO HAS THE SAME NAME AS YOU

REALITY: the only guys you meet when you actually go out are either taken or gay

REALITY: a bad picture of you was once tagged ON facebook

'SATC': REALTORS QUESTION YOUR RELATIONSHIP STATUS WHEN YOU PURCHASE YOUR FIRST APARTMENT

REALITY: YOU're only asked about your marital status at the Gynecologist

'SATC': YOUR RUSSIAN BOYFRIEND WANTS YOU TO MOVE TO PARIS WITH HIM

REALITY: YOUR RUSSIAN BOYFRIEND WANTS YOU TO MOVE TO RUSSIA WITH HIM. and you consider it.

'SATC': YOU HAVE A FLING WITH THE hot guy YOU MEET IN YOUR THERAPIST’S OFFICE

REALITY: THE 'hot' guy at YOUR THERAPIST’S OFFICE is actually just a 75-year-old cancer patient

'SATC': YOU HAVE A PROBLEM WITH YOUR BOYFRIEND BEING TOO ‘AVAILABLE’

REALITY: YOU HAVEN’T HEARD FROM that guy you hooked up with in two weeks

'SATC': YOU HAVE TO FIGHT WITH YOUR SOON-TO-BE MOTHER-IN-LAW ABOUT GETTING $1 MILLION IN THE PRENUP

REALITY: Your boyfriend is unemployed, and his parents have cut him off

'SATC': YOU GET MUGGED FOR YOUR MANOLOS

REALITY: YOU wear converse just in case you have to run to avoid a run-in with your ex

'SATC': YOUR FRIEND gives you HER ENGAGEMENT RING SO YOU CAN BUY BACK YOUR APARTMENT

REALITY: YOUR FRIENDS ARE JUST AS BROKE AS YOU ARE

'SATC': THE WORST THING THAT HAPPENS TO YOU IS THAT SOMEONE STEALS YOUR MADE-UP BABY NAME

REALITY: Your mom likes to call you just to remind you about your biological clock

'SATC': YOUR COMPUTER CRASHES AND YOUR BOYFRIEND BUYS YOU A NEW ONE

REALITY: yOU’RE STUCK BORROWING YOUR ROOMMATE’S computer UNTIL YOU CAN AFFORD A NEW ONE

'SATC': YOU TURN DOWN THE HOT NAVAL OFFICER BECAUSE HE INSULTS YOUR CITY

REALITY: you turn down a hot naval officer because he's gay

'SATC': A PUBLISHER OFFERS YOU A BOOK DEAL even though you haven't EVEN CONSIDERED WRITING A BOOK

REALITY: YOU’RE STILL NOT SURE HOW TO SPELL ‘GABBANA’ CORRECTLY

'SATC': YOU GIVE YOUR BOYFRIEND PERMISSION TO CHEAT, BUT HE DOESN’T WANT TO

REALITY: YOU’VE BEEN TRYING TO GET YOUR BOYFRIEND TO BE FAITHFUL SINCE YOU MET HIM

'SATC': YOU HAVE A CLOSET FULL OF DESIGNER CLOTHING ... ON A SEX COLUMNIST’S SALARY

REALITY: YOU HAVE THREE ROOMMATES IN BED-STUY, two jobs, and ONE PAIR OF SECONDHAND PRADA SHOES

'SATC': YOU MEET A GUY AT THE GYM, AND ARE DISTURBED TO DISCOVER HE HAS A SPANKING FETISH

REALITY: YOU MEET A GUY AT THE GYM?! Oh my god that never happens!

'SATC': YOUR EX RUNS TO PARIS just TO GET YOU BACK, TELLs YOU YOU’RE THE ONE

REALITY: GIVE ME A FUCKING BREAK