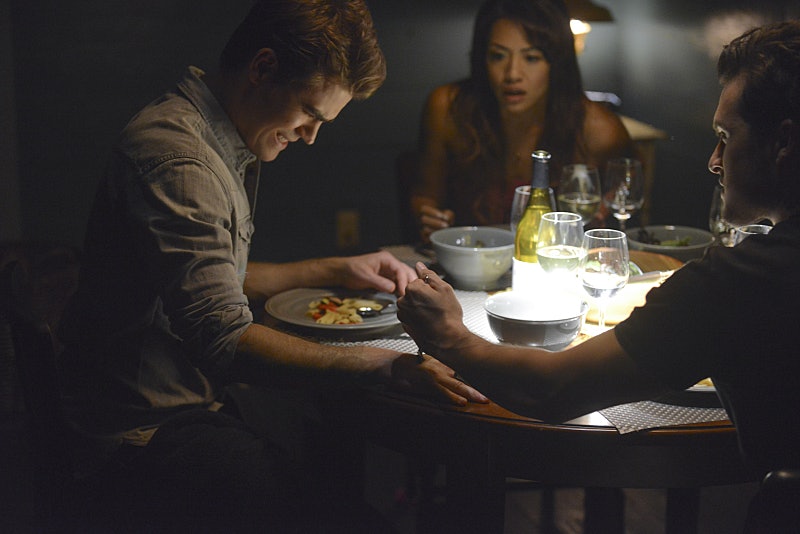 Guys, the time has come. The Vampire Diaries Season 6 premieres Thursday. While you're grabbing your popcorn and turning off your phone for the big episode, there are some things to keep in mind. Of course, as always, all is not well in our beloved Mystic Falls thanks in great part to the Traveler spell from Season 5. But we are distracted by a lot of other things: Damon is dead, some people are sorta-maybe-kinda dead. It's an ordeal. But we should be very concerned about Traveler spell that Markos left behind. What is the deal with that, amirite? And more importantly, how can Stefan and Co. stop it?

Where we left off last season, the Traveler spell was set in motion. It made it so that no magic could exist in Mystic Falls, which means no vampires. It even changed Tyler from a hybrid to a regular old human. Well, damn.

The issue is that we need Mystic Falls back. Like immediately. It's is where the beautiful faces of our favorite vampire crew belongs. I mean, sure Elena and Caroline were all about living it up at Whitmore College, but that doesn't mean Caroline shouldn't be allowed to come visit her mom without, you know, the fear of a very real death. There has to be a plan to get rid of the spell and that plan has to work.

And it's not like the gang isn't without resources: We've got the unrelenting Caroline on our side. According to TVD episode synopses, Caroline is working to get things back to the way they were in tonight's premiere episode. And we all know that when Caroline sets her mind to something, it gets done.

And we've got Liv, who (according to EP Caroline Dries' chat with EW) is apparently going to be hanging around for a while this season.

We've got Damon's unrelenting love for his home and girlfriend. Ian Somerhalder told EW that Elena "is a driving force in his life" and that "Damon doesn't give a sh-- about very much except his home, his brother, and his girl." So if there's anything that Damon or Bonnie can do from the nonexistent other side to fix the Traveler spell, we know it's gonna be good. (And let's face it, he's gotta come back. We would practically die without him. *Swoon*)

And though the ingredients to take down the spell are scattered around, the big question is how do they take it down? Rest assured, it's not going to be a bunch of crazy mythological rules and regulations as before. The show's executive producer, Caroline Dries also told EW that we can rely on character changes rather than complicated mythological background studies:

We're not inundating the audience with really dense mythology. We're trying to keep it very simple in changing up all of the character dynamics.

So my theory is that whatever plan brings Bonnie and Damon back from the nonexistent Other Side is going to be get folded into undoing the Travelers' spell on Mystic Falls. Why? Because Elena is pissed at Liv and Luke for not bringing Damon back. To boot, because of the spell, Elena can't even see Jeremy or roam the halls of the Salvatore mansion, where so many memories live.

Liv and Luke are totally capable of fixing this spell. I have no doubt. They just need the proper push to get them to do it. Lucky for us, Elena is in no position to play nice anymore and, frankly, she probably doesn't want to. Now all we can do it hope Mystic Falls is back in the picture sooner rather than later.