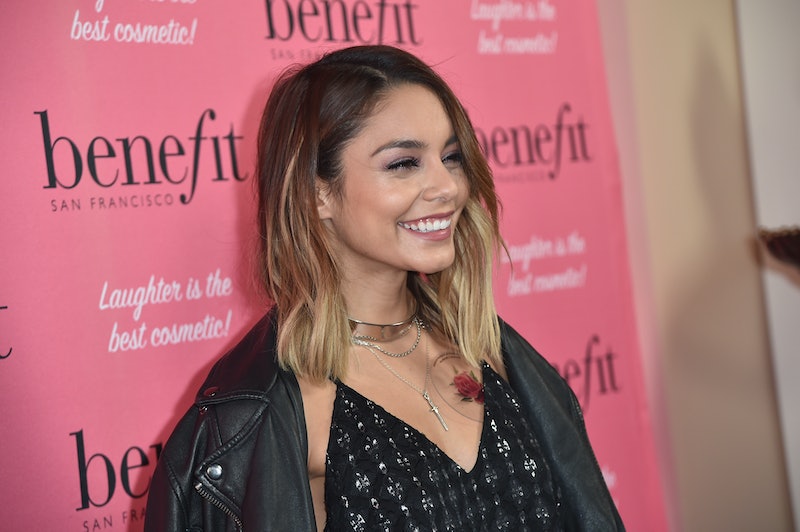 Lookout, Demi Lovato and Katy Perry. There's another starlet nipping at your Louboutins when it comes to crazy celeb color changes: actress Vanessa Hudgens, who dyed her hair red Thursday. While The Hudge's former co-star Ashley Tisdale showed off purple hair earlier this week (another celeb hair color trend that won't, ahem, fade), the usually raven-haired singer and actress has gone really red. Like fire engine red. And according to Hudgens, who dyed her locks a soft blue shade this summer, she is so excited about the Halloween season, of which blood red is a popular hue, that the thrill manifested in her hair.

Hudgens' Year of Hair has seen her go all over the place, from brown to ombre with blonde to tips to blonder to shorter to wavier to bedheadier to sea nymph blue to her current shade of red. Currently, her roots are dark brown and the length to the tips is Ronald McDonald red. The last celeb who could really, like, really pull this shade off? I'd say Rihanna on Rolling Stone's cover back in 2011.

Hudgens posted, "Someone (ME) is very excited for Halloween. Meaning I had to dye my hair to match the season." Aren't you crushing on her matching crimson lipstick? The color is so subtle and artfully blended that it creates a surprisingly flattering effect. Her mid-length is perf for this shade, too. It's not overwhelming.

She looks super gorge with the red Manic Panic-like color.

So freakin' cute. Let's cycle through eight times that V. Hudgens changed her hair in a major way as of late. Cool?

That messy, "I've been out in the sun and heat all day" texture of her mostly-blonde-but-dark-roots locks was totally Coachella hair.

The Hudge was all sea nymph x blue mermaid with these flowing, ethereal locks.

The former lady love of Zac Efron went fuss-free in NYC this summer, with short, center-parted, two-toned locks. Check her out with no makeup, too. #Flawless.

Hudgens was glammy, thanks to these effortless waves and a more overall blonde look.

Like seriously, is there any hair color that doesn't work for her? The long waves and mostly golden strands reminded me of a younger J. Lo. The Hudge could be Lopez's baby sis.

This deep and dark brown is Hudgens' most associated color. She was always long and dark on our TV screens but she's clearly deviated from a monochromatic, chocolate shade for quite some time now. Ever since she chopped off her hair for her role in Gimme Shelter, she has been experimenting.

I can't with her. The glasses. The blingy Disney bow. The eyes. The hair. Come on!

This outtake from her Bongo campaign showed off a more honeyed ombre look, with extra length and volume, likely from extensions. Again, she can work dark lips, light lips, dark hair, light hair and never make me go, "Ooh, that was a style mistake." Clearly, I can make a Dr. Seuss rhyme, too.

Around this time last year, Hudgens made another autumn-inspired change to her strands, this time going for a brown, red, and golden ombre. Guess we know what her favorite season is...