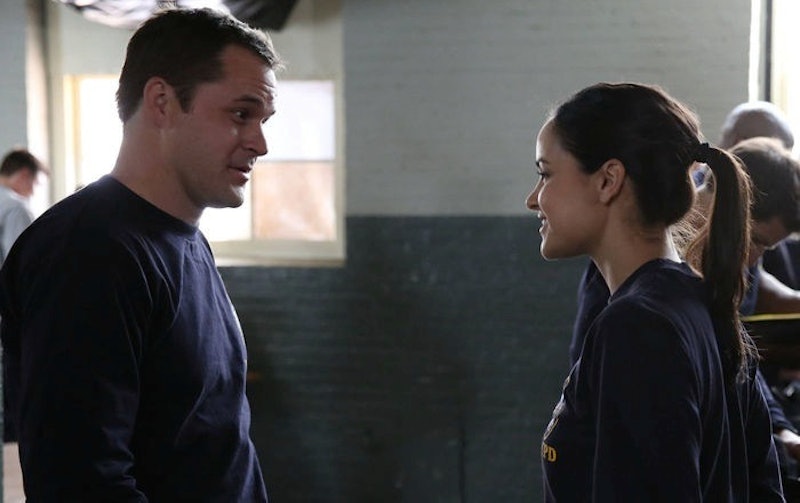 I understand that after what I'm about to say, many of you Brooklyn Nine-Nine fans will hate me. But that's a chance I'm willing to take, so here it goes. I'm pretty happy that Santiago is with Detective Teddy Wells. In fact, from the little we've seen of him, I actually really like the guy and think he and Santiago are kind of perfect for one another. Here's the deal, I love the idea of Amy and Jake getting together, but that doesn't need to happen right now. And it seems like the Brooklyn Nine-Nine writers, as the Season 2 premiere kept Amy and Teddy together and Amy basically told Jake that she picked Teddy over him. As much as people are complaining that Jake and Amy are Brooklyn Nine-Nine's OTP, why can't we all agree that Teddy actually seems like a great guy?

Quick background refresher for how Amy and Teddy got together. The pair originally met and went out a few times during their days going to police code seminars about ambulances, or something equally nerdy and adorable. But they had to end things when Teddy got stationed in Queens and their hectic schedules and proximity became an issue. Some of you might think that's strange, since Queens and Brooklyn are both in New York City, but I promise you that train ride can feel so long sometimes, you should need a passport to cross between the boroughs. The pair got back together after they met again at the Tactical Village simulation test and reunited over drinks, much to Jake's annoyance.

Listen, obviously Teddy is not as funny as Jake and arguably not as cool. But who cares? What matters is how he treats Santiago and how he makes her feel. At the moment, they both seem to really care for each other. Teddy is not only a great detective, but a nice person who really respects Amy for her talents in the police department. And as we all know from a whole season of Amy desperately trying to get Captain Holt's approval and win a bet to collar the most criminals with Jake, this is clearly a woman who demands, and does crazy things for, respect.

And not only does Teddy admire his girlfriend, but he also recognizes her strength. She's a detective and a very smart one, something Teddy clearly understands, being a detective himself. Then there's the fact that Teddy understand Amy's quirks, like her insane determination to get Captain Holt to take her under his wing as a protege. She admires Holt so much and Teddy doesn't let that admiration get to him.

Any which way you slice it, Teddy is a good guy, and Amy deserves to be with a good guy who knows what he wants. Jake spent quite a long time dragging his feet when it came to relaying how he felt about Amy. She was already in a relationship when he admitted it and he was about to leave to go on an undercover assignment. Jake didn't give Amy enough time to process this information and might've been too scared to hear her answer.

Even if Jake and Amy are the OTP of Brooklyn Nine-Nine, that doesn't mean Amy can only have totally crappy boyfriends or love interests until she and Jake finally choose to be together. For example, obviously Ben and Leslie on Parks and Recreation are perfect together and are never allowed to be apart. But Louis CK's Dave was also a great fit for Leslie and he made her very happy when they were dating. Danny and Mindy are obviously The Mindy Project's OTP, but Mindy had a great relationship with Casey for a while, until Mindy could no longer be dragged along while he tried to find himself. They broke up for a normal reason that couples who love each other break up over all the time.

So why can't Amy have a great relationship with another person? And why can't that other person be Teddy? Because right now, he's the only guy who knows what he wants, can express his feelings for Amy, and has his life together. He's a huge catch and we should all treat him as such, even if he is currently standing in the way of Jake and Amy.