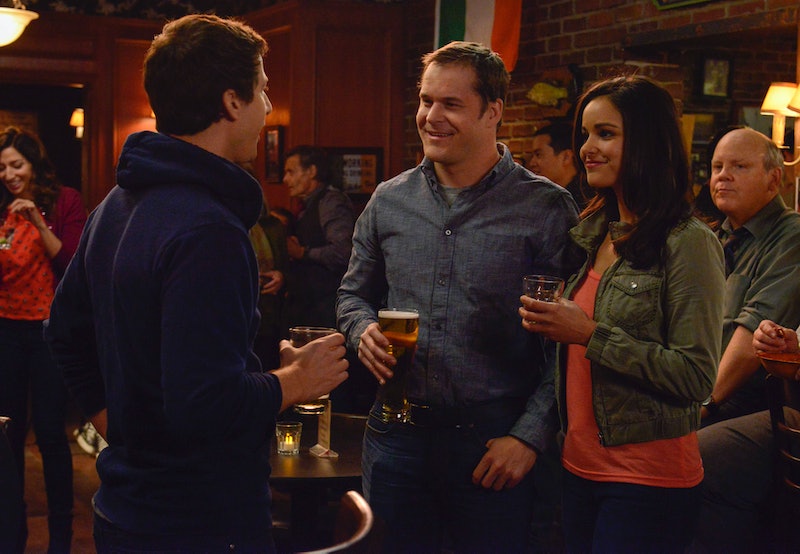 Who knew that Mr. Andy Samberg could be such a dreamboat? (OK maybe a lot of people, but I wasn't one of them until now.) When Jake revealed his feelings for Amy on Brooklyn Nine-Nine, the man-child police officer showed that he's a fabulous mix of goofy, sweet, and genuine. But according to Entertainment Weekly's Spoiler Room, it seems like Jake Peralta and Amy Santiago won't be getting together just yet in Season 2. Natalie Abrams wrote, "It won’t be long before Jake returns to the 9-9, but he’ll be a little busy taking down mobsters to focus on his love life. Of course, the big elephant in the room is addressed, but you’ll be surprised by what route Paralta [sic] takes once he’s back on the squad."

I'm fascinated that we are are going to be surprised by the route Peralta is going to take rather than the route Amy is going to take. It may have something to do with the fact that guest star Eva Longoria will be portraying a defense attorney — and a potential love interest for Peralta — in Season 2. Longoria's arc will only be for three episodes, so if they do date it won't be a long-term commitment, but it's something to keep the Santiago-Peralta relationship at bay.

There will also be a time jump between Season 1 and Season 2, which can mean a number of things. Perhaps Amy and her boyfriend Teddy will have broken up — or they could be even more committed to each other. The fact that Peralta will have been away from the precinct on an undercover assignment is perfect for adding to the confusion of their relationship — and delaying it from starting up.

I think the show should definitely not have the couple hookup in Season 2. As we've seen with fellow Fox shows New Girl and The Mindy Project, having the will-they-or-won't-they couples get together too soon can kind of lead to disaster — and some grumpy fans. That's not saying Peralta's attraction to Santiago isn't completely adorable — it is and adds to his charm. And the show handled Jake's confession to Amy in the Season 1 finale in such a real, sweet way.

Now, that's how adults can admit feelings! Although Jake Peralta doesn't immediately come to mind when you think of the world "adult," he is a good man. And as co-creator of the show Mike Schur told HitFlix, "We wanted to slow-play Jake and Amy, and only bring it to the fore at the end of the season. The basic idea was that Jake slowly realizes over the year that he should be interested in women like Amy, and also that women like Amy aren't going to be interested in him unless he cleans up his act a little."

It's interesting that Schur says, "women like Amy" and not just "Amy." That could mean Peralta may date someone like Amy and grow up a bit. As Santiago said to Jake once, "Are you really qualified to give romantic advice? You're not exactly the king of mature relationships." (Although she did take it back at the end of the same episode — which he responded by calling her a "fart monster." Oh, Andy Samberg, you can call me a fart monster any day.) But it would definitely be for the best for Peralta to enter into a mature relationship and grow up a bit, have Santiago loosen up a bit, and then bring the pair together. Jake could even work on his grammar in his texts during that time as well.

Fumero recently spoke with Latin Times about Season 2 of Brooklyn Nine-Nine and she wouldn't give any insight into the romance of Santiage and Peralta. But regardless of how they play out their relationship, the show is really about the ensemble as a whole — and it promises to be as hilarious as ever (as shown by the Season 2 promo video) when it returns.