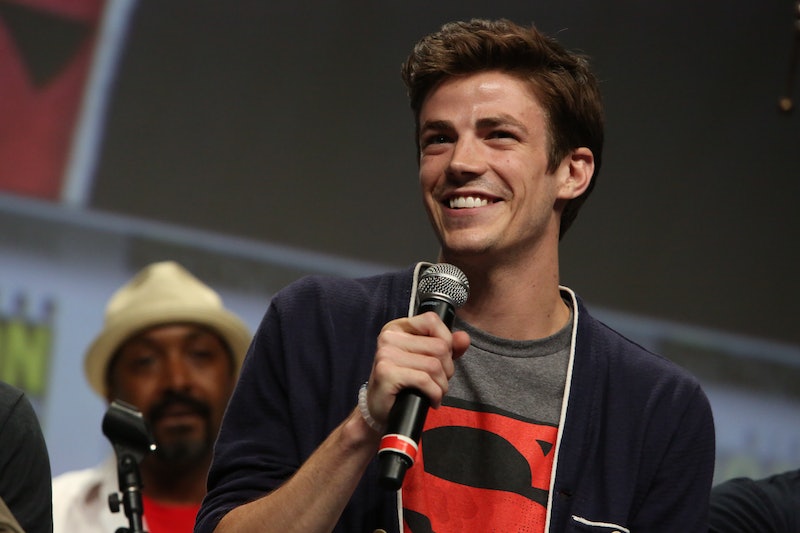 Oliver Queen won't be the only superhero on The CW this fall. Arrow — which will air its Season 3 premiere on Oct. 8 — will be joined by spinoff series The Flash , premiering one day earlier than the original series on Oct. 7. If you're a fan of Arrow, you already know exactly who will be playing the iconic speedy superhero The Flash in the upcoming series: Grant Gustin made his first appearance as Barry Allen, the young scientist who will become The Flash, on the second season of Arrow. During his three-episode arc, Gustin proved that he is the perfect mix of wit, naiveté, and lean muscle (necessary for any long distance runner, which The Flash basically is) and it's clear to see why he's making the jump from guest star to full-fledged leading man on his own series. And since he's absolutely adorable, I have to ask: Is Gustin single?

Brace yourselves, fans: Gustin is very much taken. And, in case you were wondering, by a woman. Though the new superhero played the gay head of the Warblers, Sebastian Smythe, on Glee, he confirmed to Zap2It that he's straight. That's not to say that he can't relate (in some ways) to the struggles that Glee characters like Blaine and Kurt went through on the series. Though he identifies as straight, he was "gay-bashed" in high school by ignorant classmates who didn't approve of his hobbies like theater and dancing. (It looks like Gustin is getting the last laugh with that.)

The person that allegedly has Gustin's heart is actually someone he worked with on Glee. Nope, it's not Naya Rivera (despite the bizarre sexual chemistry that the two had during their Michael Jackson number — seriously, that was weird.) Gustin is allegedly dating Hannah Douglass, an actress/dancer who plays one of McKinley High School's cheerleaders. Douglass and Gustin are so cute together that fans even gave them a couple name — it's Grannah, and Gustin fans are pretty much obsessed with them. And why wouldn't you be? Look how cute they are!

Unfortunately for Grannah fans, it doesn't look like Gustin and Douglass will reunite on Glee anytime soon. Though Gustin was a fan favorite as bully Sebastian, he passed the Warbler torch to Hunter (played by Nolan Funk) in Season 5. Given that Gustin will be very busy with The Flash, it's doubtful he'll return to Glee's final season. But if there's ever a dance-heavy episode of his CW show, I'm sure he'll give his girlfriend a call.