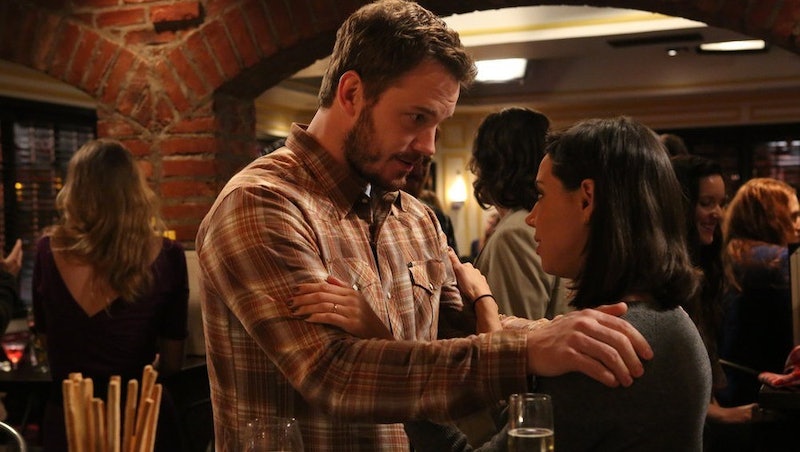 Andy and April on Parks and Recreation surprised us back in Season 3 when they invited viewers to their fancy party and instead gave us a wedding. Since then, the couple has kept with their unconventionality, but is there a possibility that Andy and April could have a baby in Season 7? Actress Aubrey Plaza has not been shy to say that she has wanted April to get pregnant for awhile. But with Leslie and Ben's triplets from Season 6 (and Ron and Diane's and Chris and Ann's babies for that matter), there was a whole lot of baby-making going on. Since Season 7 will take place three years in the future, could now be the time for Plaza to get her wish?

Co-creator of Parks and Rec Michael Schur has been in opposition with Plaza on the topic of a Ludgate-Dwyer baby. But now that more time has lapsed in the land of Pawnee, it seems like he could be having a change of heart. After the announcement that Season 7 would be the last for Parks and Rec, he told Entertainment Weekly about why he hasn't agreed with Plaza in the past. "She's been desperate to be pregnant on the show. And part of the reason I didn’t ever want to make her pregnant was because I liked that she and Andy represent the young people on the show," he said. "But now we’re jumping three years in the future, so that’s certainly a possibility."

I actually really love Schur's reasoning. You know when your friends get engaged before you do, get married before you, and inevitably get to making planned babies before you do? You're super excited for them when you get their call/email/text/Facebook post — because they are your friends after all — but part of you feels a little bit of shameful sadness. Like, "I'm so happy they are happy... but there goes another one."

Andy and April having a child kind of would have felt the same ('cause you know, they're my friends). It would be a fun plotline, but I'd know that my TV friends were never going to be the same again. Because parenthood inevitably changes you and your priorities have to completely switch. Do you think Andy could be doing all of his Johnny Karate gigs if they had a newborn? I don't think so. (Although I just pictured that and I'm sure it would be hilarious.)

Back in 2011, after the Andy and April surprise wedding, Pratt did an interview with Vulture and discussed the possibility of the couple having a baby (and Schur's thoughts about it).

We've talked about a baby. But Mike sorta said, 'Yeah, but then they're going to have a baby. And they're dealing with a baby, and they grow up too fast.' They want us to be married like third graders, where it's, 'Oh, if you like her so much why don't you marry her?' and 'Okay, fine, I will!' There's something very childlike about their relationship. It's very pure and innocent.

The fact that April and Andy will now have been married for six years (and maybe spent the past three helping take care of Ben and Leslie's triplets), I can accept that they may be ready for a baby. And what's cool about the fact that Season 7 is only 13 episodes this year (I'm really trying to find a silver lining here), is that we don't even need to see them actually have the baby. April could just find out she's pregnant and end the series on that note.

When Season 7 premieres in January, we'll hopefully learn all about what Andy and April have been up to. Although a baby may come along, we also shouldn't be too surprised if they got divorced and remarried (maybe more than once) during that time either. Because baby or no, Andy and April will always be TV's most endearingly untraditional couple.