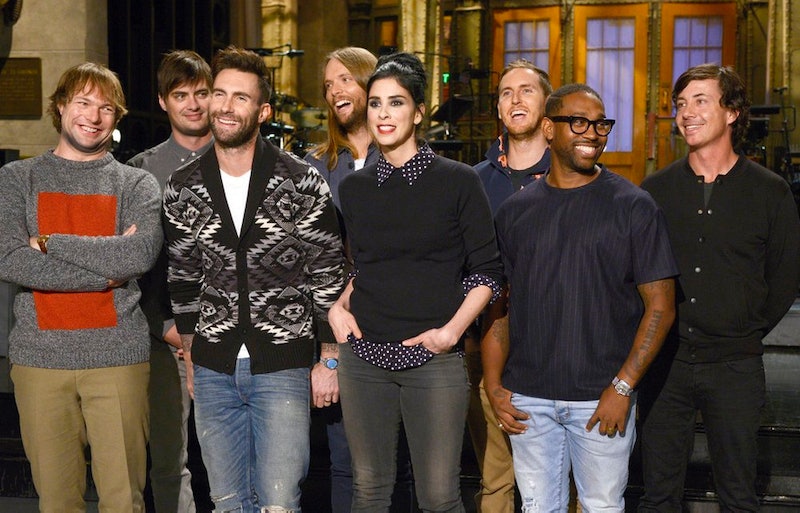 You can usually feel out how funny the newest Saturday Night Live will be with the monologue. So when SNL 's old cast member Sarah Silverman took to the stage to perform her monologue and called upon her 90's self to help, the remainder of the episode seemed very promising. Silverman, who was a cast member and writer from 1993-1994, opened the show with classic standup, bringing in an audience member who I think was either genuinely surprised she was being used, or is one of the best actors SNL has had on the show in years.

Because it is Silverman's first time hosting SNL, she took the opportunity to impart some wisdom upon the viewers of the show, even bringing in a little help from her 90's self. Using old clips of her as a staged audience member, 90's Silverman asked 2014 Silverman questions that absolutely didn't pertain to her monologue or the show itself, but successfully made fun of how little she was utilized during her time as a cast member, teaching us, it is OK to make fun of ourselves. Here are a few other lessons Silverman taught us in her monologue:

You Deserve Love, But Make Sure To Love Yourself

Even though Silverman's compliments to this audience member were seemingly said just so she can receive compliments back, it is a good piece of advice. Silverman told the woman that she deserves love, but she should be sure to be as kind to yourself as she is to any guy she meets on the street. Good advice.

Think of an app that will earn you money

Sure, the app that Silverman thought of was an app that told you when your friends were "making a doody" — a.k.a. Words With Friends — but regardless, be inventive.

"Muster Up A Moment"

In case you royally mess up and vomit at a party, you can muster up a moment by screaming "Ta- Da!" when it happens.

Silverman's questions from her 90's self were completely left field — "Are you going to be doing any solo albums now that you've left Wilson Phillips?" a doe-eyed Sarah asked present day Sarah — but she used the questions to self-promote her new comedy album "We Are Miracles." Because, why not?